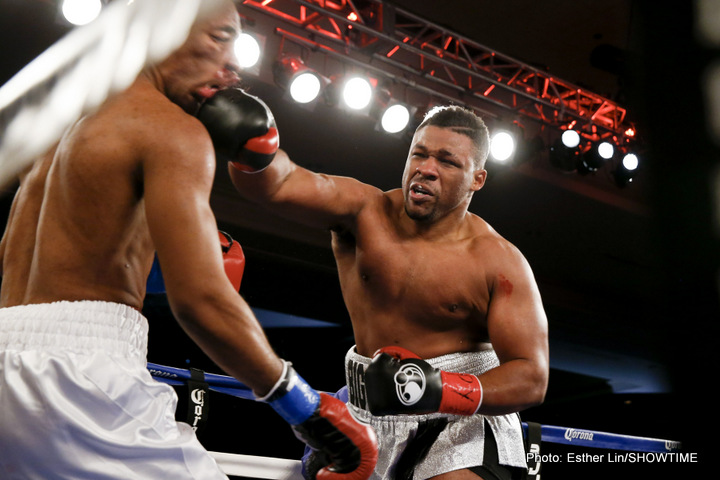 It’s a no brainer for the New Yorker Jarrell Miller to have been added to the Jacobs-Sulecki card. Jacobs is from New York as well. With both fighters from New York, it will help with ticket sales and bring in more viewers from the east coast to watch the fight card on television on HBO on April 28th.

Sulecki was picked out from the 154 lb. division for Jacobs to fight. This is going to be a size mismatch. Jacobs is like a super middleweight that boils down to 160. Sulecki is a junior middleweight. You get the picture. Jacobs’ promoter Eddie Hearn is making sure that Jacobs doesn’t lose by pooling from the 154 lb. weight class,

This isn’t the greatest card for HBO. Having Jacobs and Miller on card is a good thing. Their opponents Sulecki and Duhaupas make it an OK card, but nothing special. A better match-up for Jacobs would have been for his promoter Eddie Hearn to put him in with Jermall Charlo, who has made it clear that he wants to fight him. Hearn says Charlo is not in his future plans for Jacobs. Demetrius Andrade and Sergiy Derevyanchenko are other middleweights that would be for more preferable for Jacobs to fight than Suleci. A better match for Jarrell Miller would have been Carlos Takam, Agit Kabayel, Dillian Whyte, Dereck Chisora, Hughie Fury, Alexander Ustinov, Oscar Rivas, Adam Kownacki, Dominic Breazeale or Charles Martin. Duhaupas loses each time he steps up a level and faces a good opponent.

The 6’4”, 300 pound Jarrell should be able to get past Duhaupas. This is a mismatch on paper.
Jacobs, 31, is promoted by Eddie Hearn in the UK with his Matchroom Sport company. This is Jacobs second fight with Hearn and HBO, who signed him recently to a multi-fight deal. Jacobs’ first fight with HBO and Hearn was against Luis Arias.

Ranked #6 with the WBC, Duhaupas, 37, has won his last 3 fights against weak competition since being knocked out in the 6th round by Alexander Povetkin in December 2016. Povetkin looked like Superman that night. The Russian fighter was at his best. Povetkin hasn’t looked the same since then. Duhaupas had the bad luck of fighting Povetkin when he was fighting at a VERY high level. Duhaupas challenged for a world title against WBC heavyweight champion Deontay ‘Bronze Bomber’ Wilder in September 2015, but he was stopped in the 11th round of a one-sided contest. It was never at any time a competitive. Wilder was hitting Duhaupas at will with power shots in the 11th round at the time the referee Jack Reiss stepped in to stop the match. The positive news about Duhaupas is he’s won his last 3 fights against these little known fighters: Newfel Ouatah, Evgeny Orlov and Davit Gogishvili. Duhaupas’s best career wins have come against Manuel Charr and Robert Helenius. Duhaupas has loses to the aforementioned Povetkin, Wilder, Francesco Pianeta and Erkan Teper.

For the 29-year-old Miller, he’ll be making his second fight on Jacobs’ undercard. Miller fought Mariusz Wach on the undercard Jacobs’ fight against Luis Arias on November 11th last year on HBO Boxing at the Nassau Coliseum in Uniondale, New York. Miller stopped Wach in the 9th round. Miller is still unbeaten since turning pro in 2009.

Miller has recent wins over these heavyweights:

A former sparring partner for heavyweight world champion Wladimir Klitschko, Miller looks to be one of the better contenders in the division. Whether Miller has the talent to win a world title against the likes of Deontay Wilder and Anthony Joshua remains to be seen. Miller looked like he was close to being knocked out in the 5th round of his recent fight against the 6’6” Washington last July in Brooklyn, New York. Washington unloaded a barrage of punches to the head of Miller during the round. Miller took all of the shots, but it looked really bad. The only reason Washington stopped throwing was because he got tired of hitting Miller to the head. A heavyweight with more power and better stamina would have likely knocked Miller out. For Miller to have a chance of beating a good heavyweight, he’s going to need to work on blocking punches and moving his head. Miller can’t afford to let the better heavyweights tee off on him the way that Washington did. The 6’5” Duhaupas isn’t a big puncher, but he has decent right hand power, and he moves well for a big man. He might be able to give Joshua some problems with his mobility.

Hearn has mentioned recently that Miller is a possible foe for IBF, WBA heavyweight champion Anthony Joshua (20-0, 20 KOs) in the summer if he doesn’t match him against WBC heavyweight Deontay Wilder.

Hearn recently signed the 31-year-old Daniel Jacobs to his Matchroom Boxing stable. Jacobs lost to middleweight champion Gennady ‘GGG’ Golovkin by a 12 round unanimous decision last year on March 18th on HBO PPV. Hearn insists that Jacobs won that fight against Triple G, and that’s one of the reasons why he signed him. Hearn thinks Jacobs can beat Golovkin and Saul Canelo Alvarez. Hearn’s goal is to get Jacobs a fight against the winner of the May 5th Canelo vs. Golovkin rematch. There’s a good chance that Hearn could get one of them, but probably not Golovkin if he comes out victorious against Canelo. Golovkin wants to finish unifying the 160 lb. division by facing WBO middleweight champion Billy Joe Saunders to win the final belt in the division that isn’t already in his possession. Jacobs will likely lose to Golovkin and Canelo. But it’ll be a positive for Hearn just to have Jacobs fight them. Jacobs needs to make sure he doesn’t lose to Sulecki, because if he gets beaten against him, then he can forget about facing Canelo or Golovkin. Sulecki, 28, has a real chance of beating Jacobs, because he’s a heavy-handed fighter with a lot of talent. Sulecki beat Hugo Centeno Jr. recently with ease.