Daniel Jacobs vs. Maciej Sulecki official for April 28 on HBO 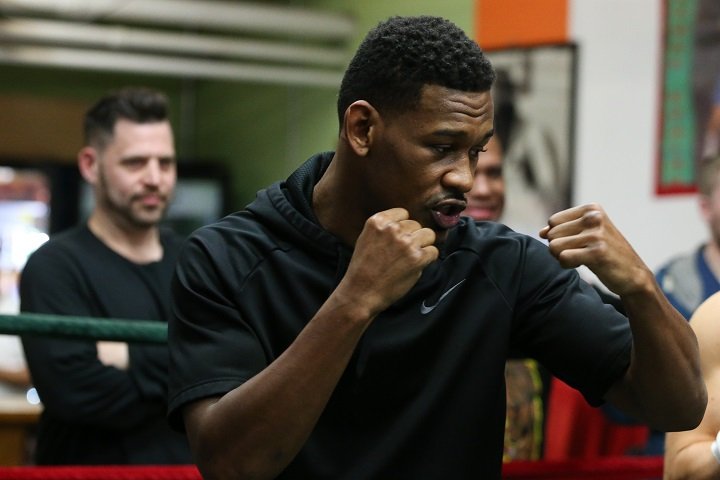 By Dan Ambrose: Earlier today, the Daniel Jacobs vs. Maciej Sulecki and Jarrell ‘Big Baby’ Miller vs. Johann Duhaupas were made official by Matchroom Boxing for April 28 on HBO at the Barclays Center in Brooklyn, New York.

Miller, 29, has a chance of facing IBF/WBA heavyweight champion Anthony Joshua in the summer in the U.S if he beats the 6’5’ Duhaupas on April 28th. That would give Miller a life-changing payday if he can get the Joshua fight. If Miller beats Joshua, he’ll get an even bigger payday in the rematch. That wouldn’t make Matchroom Sport promoter Eddie Hearn very happy, as Joshua is his biggest star in his stable. Joshua needs to win his March 31st unification fight against WBO heavyweight champion Joseph Parker. Miller beat Mariusz Wach by a 9th round stoppage in his last fight in November of last year. Miller wants to face Jacobs.

Jacobs’ new promoter Hearn is saying a win for the 31-year-old Jacobs (33-2, 29 KOs) over junior middleweight contender Sulecki (26-0, 10 KOs) will get him a fight against the winner of the May 5th rematch between IBF/IBO/WBA/WBC middleweight champion Gennady ‘GGG’ Golovkin and Saul ‘Canelo’ Alvarez. Hearn thinks Golovkin and his management at K2 Promotions will opt to take the rematch with Jacobs, who he already beat last year in March by a 12 round decision. Jacobs lost the fight, but he claims he should have won the fight. Hearn says Jacobs deserved the win. The problem is Jacobs isn’t on Golovkin’s immediate radar screen.

If the Kazakhstan fighter defeats Canelo in their rematch on HBO pay-per-view on the 5th of May, he’ll then look to face WBO middleweight champion Billy Joe Saunders (26-0, 12 KOs) in a unification fight later this year. If Golovkin wins that fight, then he’ll probably be facing Canelo in a 3rd fight next year in May 2019. If Jacobs loses to Sulecki, then he can forget about ever getting a rematch with Golovkin or a fight with Canelo. A loss for Jacobs against Sulecki would be a disaster for the New York. It would be difficult to imagine HBO and Hearn sticking it out with Jacobs for another multi-fight contract if he loses to Sulecki. Jacobs is 31, and he’s not a young 31. He’s got mileage on him, and he doesn’t brave fighting style that you would like to see from a fighter. Jacobs looked timid against Arias last November. Jacobs fought like he was still in the ring with Golovkin.

”Daniel Jacobs faces a tough test against Maciej Sulecki, and I believe victory will lead him to the winner of GGG and Canelo the following week,” Hearn said to ESPN.com. ”That’s what Daniel wants, that’s what HBO wants, and it’s what the fans should demand.”

Hearn must not be paying attention to what Golovkin has been saying. Golovkin already beat Jacobs, so he’s not someone he’s interested in fighting. It doesn’t matter if HBO wants it. Golovkin wants to fight Billy Joe Saunders for his WBO title. That’s the last of the middleweight titles not in Golovkin’s possession. If Golovkin doesn’t get beaten by Canelo on May 5, he’s going to be going for the Saunders fight.

The interest from the boxing public in a fight between Jacobs and the winner of the Canelo-Golovkin fight isn’t there. Jacobs hasn’t increased his popularity at all since Hearn took over as his promoter last year. Jacobs fought Luis Arias last November on HBO, and the fight was dull, and it didn’t bring in big ratings. Jacobs now has an equally obscure opponent in Sulecki for his April 28th fight, and there’s not going to be a lot of interest from the casual boxing fans in that fight. The hardcore fans know who Sulecki is, but not the casual fans. Those are the ones that count. This is another fail on Hearn’s part as a promoter. He should have thrown some money at one of the Charlos to fight Jacobs. Of course, Hearn has made it clear that he’s not interested in matching Jacobs against Jermall Charlo. You can read that to mean he’s not confident that Jacobs can beat him.

If everything goes right for Golovkin with him beating Canelo and Saunders in 2018, then Jacobs might be an option for him in the second half of 2019, but not before that. If Golovkin loses to Canelo on May 5th, he’s probably not going to fight Jacobs. That fight wouldn’t make sense at that point. Golovkin might instead go after Saunders anyway if he can’t fight Canelo a in September.

Jacobs needs to keep his career moving after the Sulecki fight. That means he needs to start fighting better opposition. Arias and Sulecki are fringe contenders at best. Sulecki is not even a middleweight. Hearn found Sulecki after combing the 154 lb. ranks for an opponent for Jacobs to fight. That reeks of major desperation on Hearn’s part. If Hearn wants to build Jacobs’ following with the boxing world, he needs to build him up properly by matching him against the Charlo brothers, Sergiy Derevyanchenko, and Ryota Murata. Hearn is trying to get Jacobs to get ahead of Saunders to fight the Canelo-Golovkin winner, and that’s just not going to happen. Saunders has a good chance of getting the winner of that fight. Jacobs is just a contender trying to rebuild after he lost to Golovkin last year.

There will be a news conference this Tuesday in New York on February 20th to announce the Jacobs-Sulecki and Miller-Duhaupas fight for April 28th on HBO at the Barclays Center in Brooklyn, New York.

Jacobs used his first fight of his multi-fight deal with HBO to fight Luis Arias last November. That was not an impressive performance by Jacobs. In his second fight of the contract, Jacobs is fighting Sulecki. That is a worse fight. If Hearn isn’t able to get the Canelo-GGG winner for Jacobs by his 3rd fight with HBO, you have to wonder whether they’ll bother re-signing him or not.

UK middleweight contender Gary ‘Spike’ O’Sullivan was one of the opponents that were in the running for the April 28th fight with Jacobs. Andy Lee was also one of the guys that were being considered for the Jacobs fight. Sulecki, 28, has some recent wins over Jack Culcay, Damian Bonelli, Michi Munoz and Hugo Centeno Jr. Sulecki looked good in those fights obviously. But he didn’t look good to the body where he could beat Jacobs, which is why he’s getting the fight. If Sulecki was looking as good as Jermall Charlo right now, he’d likely not be on the least for Jacobs’ April 28th fight. The point of Jacobs next fight isn’t for him to face someone in a 50-50 fight. It’s more about Jacobs facing a contender that he can get a sure thing win and showcase his talent. Sulecki gives him that opportunity. Jacobs is so flawed though. He could still lose due to his chin issues and the fact that he’s not been the busiest of fighters in the last 2 years. Jacobs fought twice in 2017, and just once in 2016.
“I’ll be very well prepared to stay undefeated and defeat Jacobs in front of the Polish boxing fans at Barclays Center as I continue my march to become a world champion,” Sulecki said.

In the co-feature bout, heavyweight contender Jarrell Miller (20-0-1, 18 KOs) fights Johann Duhapas (37-4, 24 KOs) in what is supposed to be a title eliminator for the IBF heavyweight title held by Anthony Joshua. It’s not a great fight. The 37-year-old ‘The Reptile’ Duhaupas is ranked No.14 by the International Boxing Federation and suffered a recent 6th round knockout loss to Alexander Povetkin in December 2016. Duhaupas has won his last 3 fights against poor opposition to get the chance to face Miller. It’s Miller that is the A-side in this fight. Duhaupas isn’t being brought in to win this fight. He’s just the guy that Miller is supposed to beat and look good against.

Shawn Porter and Keith Thurman boil over in confrontation »