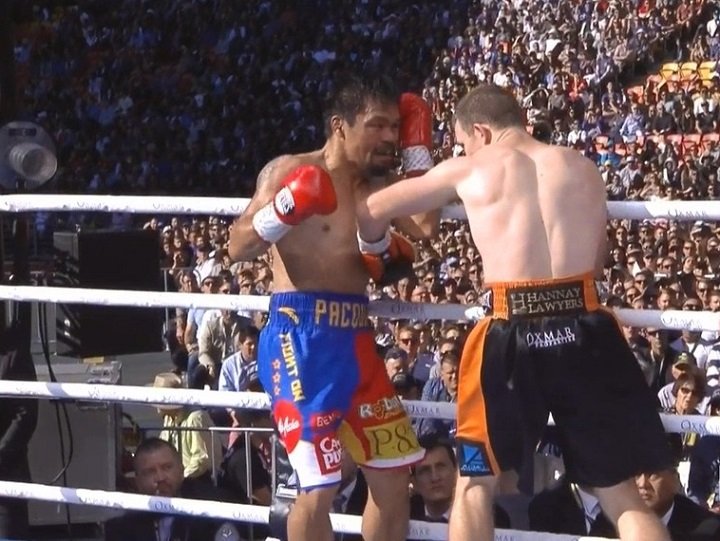 By Chris Williams: Manny Pacquiao WON’T be fighting Mike Alvarado in April in a tune-up fight. That’s the good news. The unwelcome news is there’s a possibility that Pacquiao will be fighting unbeaten #5 WBO Konstantin Ponomarev (32-0, 13 KOs).

There would be some risk involved if Top Rank matches Ponomarev against Pacquiao. Ponomarev is nothing special, but he’s 25, and he could pull off the upset. Pacquiao’s stamina and work rate are not what they once were. We saw that in his loss to Jeff Horn last July.

Pacquiao didn’t have the engine to throw enough punches to beat Horn. Apart from all the head-butts, shoving and head-locks that Horn was putting Pacquiao in all night long, it should have been easy fight for the Filipino star to win if he’d had the conditioning. I see Ponomarev as a 2nd tier fighter, and not a top 15 guy, but he still might beat Pacquiao. That’s how badly Pacquiao has slipped as a fighter.

Ponomarev is one of Top Rank’s fighters. He’s from Russia, and he has a high ranking with the World Boxing Organization for some reason. For a while now, it’s been expected that Top Rank promoter Bob Arum would match Ponomarev with Pacquiao, because the Russian fighter is one of his stable fighters, and it would likely increase his value with his promotional company if he were to fight the Filipino star.

Ponomarev’s best wins of his 8-year pro career have come against these fighters:

Ponomarev hasn’t fought in 8 months, and it’s clear that he needs to get back into the ring soon. Pacquiao vs. Ponomarev is a little better fight than Pacquiao-Alvarado, but not much in my opinion. I see the fight as just a shade better than Pacquiao vs. Alvarado. Ponomarev isn’t a big puncher, but then again neither is Jeff Horn, and he recently beat Pacquiao.

Top Rank match-maker Carl Moretti is reportedly denying Pacquiao will be fighting the 37-year-old Alvarado (38-4, 26 KOs) next. That should make some fans happy, given that Alvarado would have been a poor opponent for Pacquiao to be facing in April. Alvarado is a decent high-level journeyman level fighter, but he’s lost a lot of high profile fights in the last 6 years to Brandon Rios, Juan Manuel Marquez and Ruslan Provodnikov. The hardcore boxing fans wouldn’t be thrilled to learn that Pacquiao is facing Alvarado instead of a relevant fighter. The casual fans would have scant knowledge about Alvarado’s history, so they wouldn’t care either way. In other words, Top Rank wouldn’t gain anything by matching Pacquiao against Alvarado. The knowledgeable boxing fans would criticize the Pacquiao-Alvarado fight, while casual wouldn’t be impressed with the match-up due to them never having heard of Alvarado. The result for Pacquiao is a worthless tune-up. Alvarado would be lucky to make it to the 3rd round. Alvarado was a good fighter for a brief stretch 6 years ago, but his career evaporated overnight after his losses to Rios, Marquez and Provodnikov.

”Rumors of that fight are ‘complete hogwash,’ according to Top Rank’s Carl Moretti, who I spoke to about those rumors. He said the fight is not happening and the rumors are nonsense,” said Dan Rafael to ESPN.com.

Pacquiao, 39, needs a warm-up fight in April to get him ready to face the winner of the Jeff Horn vs. Terence Crawford fight, which is expected to take place on April 21 on ESPN in Las Vegas, Nevada. Ponomarev, 25, is one of promoter Bob Arum’s Top Rank fighters, as is Crawford and Horn. There are already some boxing fans that are predicting that Top Rank will match Pacquiao against Ponomarev for his next fight in April.

It would be great if Top Rank reached out to one of the other promoters and matched Pacquiao against Amir Khan, Adrien Broner or Danny Garcia for April. Khan is available for April. He says he needs a tune-up. Perhaps a fight with Pacquiao would interest him. I think it’s a much better fight for Pacquiao than him facing Ponomarev. Who wants to see Pacquiao fight Ponomarev? That’s a terrible fight. Even worse than Pacquiao’s fights against Brandon Rios, Jessie Vargas, Chris Algieri, Jeff Horn and his third fight with Tim Bradley.

Fury volunteers to face Joshua in winner takes all fight »