Jarrett Hurd: After I beat Lara, I want Jermell Charlo 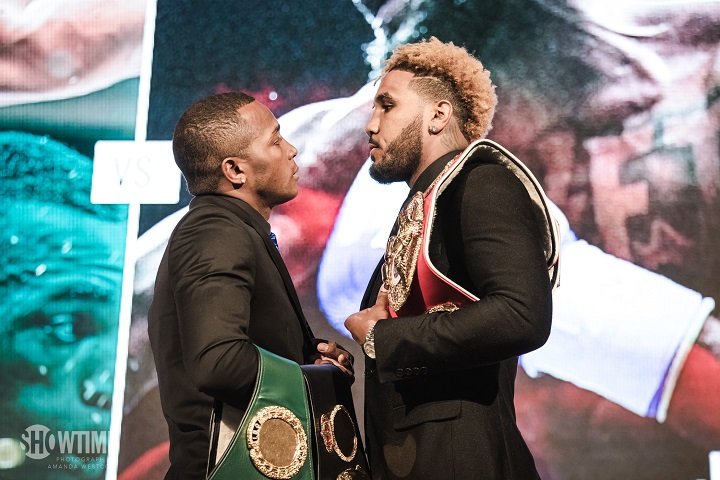 By Jeff Aranow: The younger, stronger and much bigger IBF World junior middleweight champion Jarrett Hurd (21-0, 15 KOs) says he’s going to be shooting for a unification fight against WBC 154lb. champion Jermell Charlo (30-0, 15 KOs) after he adds WBA Super World champion Erislandy ‘The American Dream’ Lara’s name to his win column in their fight on April 7 on Showtime Boxing.

The Lara vs. Hurd fight was announced by Showtime on Wednesday as part of their 2018 television schedule lineup of fights on their network. Initially, some boxing fans thought the 34-year-old Lara (25-2-2, 14 KOs) to be too talented for the younger but MUCH BIGGER 6’1” Hurd. But after the 2 fighters stood face to face on the stage yesterday in New York, the fans are starting to believe that Hurd might be too big for the 5’9” Lara. The 6’1” Hurd looked gigantic next to Lara. It wasn’t just the difference in height. It was the sheer size of Hurd. He’s just a much bigger fighter in terms of weight and build. It was the same case for Hurd in his last fight against the 5’9” Austin Trout last October. Hurd ended up using his bigger size to wear down and stop Trout. If the fight hadn’t been stopped after the 10th, Hurd would have likely knocked Trout out in the 11th.

“I feel like I’m the top guy in the division,” Hurd said to ES News Reporting. “So, I feel like a win over Lara will put me at the No.1 spot. I want to be legendary. After this fight with Lara, that’s the fight I want,” Hurd said about a unification fight against WBC 154 lb. champion Jermell Charlo. “That’s what most definitely I’ll be looking for. I won’t move up before I get it,” Hurd said.

The Cuban Lara will be turning 35 on April 11, but he hasn’t started to show his age yet. However, one reason for that might have to do with the low level opposition that Lara’s management has been feeding him for his fights on Showtime. With the network not making any noise about the lackluster opposition that Lara has been continually facing in his fights on Showtime, he’s been padding his record in beating these fighters since 2014: Terrell Gausha, Yuri Foreman, Vanes Martirosyan, Delvin Rodriguez, Ishe Smith, and Jan Zaveck. For the most part, those are fighters that are largely no longer relevant, and yet Lara has gotten away with defending his WBA title against them in televised fights on Showtime. None of the fights have been interesting to watch due to the one-sided nature of them.

” I feel like my skills are perfect for Lara,” Hurd said.” I feel like my style is similar to [Alfredo] Angulo’s, but I’m much bigger, much faster, much stronger, and much more powerful. I’m bringing that style, that pressure and that aggressiveness. I feel like I can give Lara a lot of problems and get the win,” Hurd said.

Lara had problems with pressure fighter Alfredo Angulo in June 2013. Lara stopped Angulo, 5’9”, but he was dropped by body shots in the 4th and 9th rounds. Angulo doesn’t have the size or the same punching power that Hurd has. Lara isn’t as young now as he was when he fought Angulo 5 years ago. Moreover, Lara hasn’t fought a good opponent since his loss to Saul Canelo Alvarez in 2013. That was a long time ago. The 5 years that Lara has been padding his record against weak opposition obviously won’t help him when he’s forced to deal with Hurd. This could be a bad fight to watch if Lara runs from Hurd like he did against Canelo Alvarez. Lara lost the fight because he wouldn’t stand and fight Canelo enough to win the crucial rounds down the stretch. It was a winnable fight for Lara, but he stayed on his bike and ran during the championship rounds instead of fighting.

”It’s time to put everyone on notice who the best 154-pounder is,” Hurd said. ”I know a win over Erislandy Lara will put me there, so I’m coming for that number one spot,” Hurd continued.

It’ll be interesting to see how Lara deals with Hurd’s size, power, pressure and youth. Will Lara fight him or will he run for 12 rounds? If Lara runs, I don’t think he’ll win the fight, but you never know. It depends on the judges that are working the fight. Some judges like the Mayweather style of fighting, that’s how Lara fights. He tends to hit and run, and make it look ugly. You can call it boxing, but it can be very ugly at times when Lara is facing a real threat. Unfortunately, it’s been 5 years since Lara fought a threat, so he hasn’t hard to run against old timers like 40-year-old Zaveck, 39-year-old Ishe Smith, 37-year-old Delvin Rodriguez and 37-year-old Yuri Foreman. Lara has gotten away with a lot of soft defenses over the years. When you’ve been away from fighting quality fighters for as long as Lara, it’s impossible to know how well he’ll do against a live body. It wouldn’t have to be Hurd necessarily that could give Lara problems. A top contender like Julian Williams, Erickson Lubin and Maciej Sulecki would give Lara problems as well.

Jermell Charlo, 6’0″, may prove to be a much more difficult opponent for Hurd than Lara. Charlo is almost as tall as Hurd, and he’s the same age at 27, and he’s a very big puncher in his own right.

Hurd is going to need to move up to middleweight soon, because he’s huge for the 154 lb. division, and it’s not easy for him to make weight. Hurd has been able to make weight without it draining him thus far, but he likely won’t be able to keep draining down too much longer without him being weakened considerably. Believe me; if Hurd is weight drained for the Lara fight, he’ll end up getting a boxing lesson and lose badly. Hurd will need to be at full strength to win beat Lara. If nothing else, Hurd will need to be strong so that he cut off the ring on the constantly fleeing Lara to force him to fight. 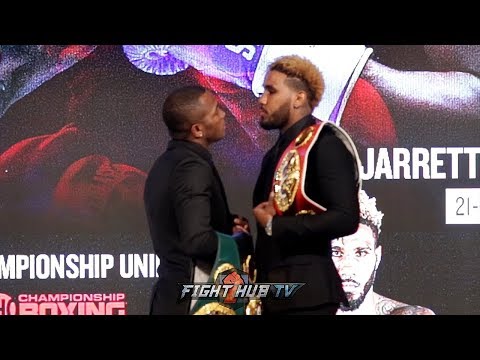