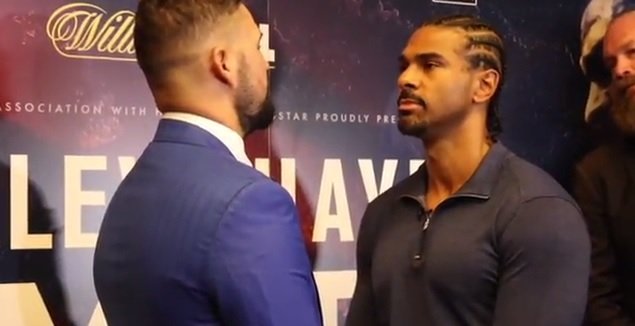 By Marcus Richardson: Promoter Eddie Hearn believes that David Haye (28-3, 26 KOs) will be back healthy 100 percent for his May 5th rematch on Sky Box Office with Matchroom Sport fighter Tony Bellew (29-2-1, 19 KOs) at the O2 Arena in London, England.

Haye, 37, is coming off of biceps surgery to repair a tear that he suffered while training for the rematch with the 34-year-old Bellew.

Haye is now trained by Ismael Salas out of the U.S.

Haye and Bellew will have been out of the ring for 14 months by the time they face each other in their rematch on May 5. That’s IF they fight each other on that date, as there’s always the chance that one of these 2 aging fighters will suffer a training injury that will cause their rematch to be postponed yet again. Haye still wants to challenge for a world title against IBF/WBA heavyweight champion Anthony Joshua.

If Haye can’t even make a training camp without a physical breakdown, he’s not going to get a title shot against Joshua. At this point, it would be extremely risky for Joshua to give Haye a crack at his titles in a voluntary defense due to the high probability of him suffering a training camp injury. That means that the likely only way Haye is going to eventually get a shot at Joshua is if he becomes his mandatory challenger. Haye fighting once a year is not going to please the sanctioning bodies to make them want to rank him No.1 with their organizations.

“He wants to try and be in big fights, he wants to try and fight for the heavyweight championship of the world,” said Hearn to skysports.com in talking about Haye. “I’m expecting him to be 100 per cent. If he wasn’t, I think he knows that’s his career over. But for Tony Bellew, he believes he is going to end his career for him on May 5.”

Hearn shouldn’t count his chickens before they’re hatched in terms of Haye being 100 percent. As we saw recently, Haye doesn’t even need to be sparring for him to suffer an injury. He was merely walking on the Stairmaster machine when he suffered an injury. The world is a like a minefield for Haye when it comes to injury. He has to maneuver just right through his environment for him to keep from suffering injuries that might postpone his fights.

Bellew’s career is also coming to an end. It’s not as if he’s got a lot of time left either. Bellew doesn’t belong at heavyweight. He vacated his WBC cruiserweight title after the World Boxing Council made Mairis Briedis his No.1 challenger. That’s a fight that Bellew likely would have lost. If Bellew moved back down to cruiserweight, he would be facing the prospects of having to compete against the likes of Briedis, Aleksandr Usyk, Murat Gassiev, Yunier Dorticos and Denis Lebedev. Those are all dangerous fighters that Bellew would have problems with. If Bellew stays at heavyweight, he’ll need to figure out what he wants to do. Fighting IBF, WBA heavyweight champion Anthony Joshua would give Bellew a big payday, as would a fight against WBC champion Deontay Wilder. But he’s not going to beat either of those fighters, and he might even get hurt if he soaks up too much punishment against either.

“I think there is plenty of fight left in Tony Bellew,” said Hearn. “He’s talking about one or two more fights. I think you might see him around for a while.”

Hearn should talk Bellew into fighting Joshua. That’s his best option for getting a big payday out of all the top heavyweights in the division. There’s no real money for Bellew in facing Dillian Whyte, Dereck Chisora or Dave Allen. Those are all fighters that Hearn promotes. Tyson Fury isn’t likely going to bother fighting Bellew, but you never know. If Bellew talks enough trash, Fury might choose to fight him. Fury will need some good tune-up level opponents. Bellew and Shannon Briggs would be excellent guys for Fury to face while he’s getting back in shape and prepared for a big money match against Joshua. Bellew is a good fighter, but he’s too small for Fury, and it would be a size mismatch. If Bellew was 6 inches taller, he’d have a chance to beat Fury, but unfortunately, he’s only 6’3”, and he doesn’t have the size to compete on an even playing field with the much taller 6’9” Fury.

Haye suffered a bad Achilles tendon tear in the 6th round in his 10th round stoppage loss to Bellew last year on March 4th in London. Haye was winning the fight at the time of the injury. Once the injury occurred, Haye was forced to hobble around the ring until the fight was halted in the 10th by his trainer after he slipped outside of the ring.