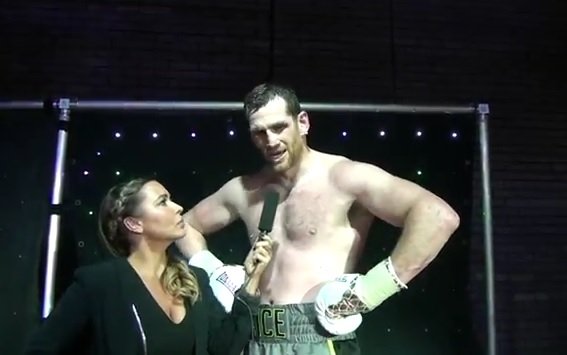 By Marcus Richardson: Promoter Eddie Hearn says he expects to have the Alexander Povetkin vs. David Price heavyweight match ready to be announced by the end of this week for the March 31st undercard of the Anthony Joshua vs. Joseph Parker unification fight at the Principality Stadium in Cardiff, Wales. This would be televised on Sky Box Office.

This is a big opportunity for Price (22-4, 18 KOs), because if he wins the fight, he’ll put himself in line for a title shot against Joshua (20-0, 20 KOs) as his WBA mandatory challenger. Price, 34, has nothing to lose and everything to gain by fighting the 38-year-old former WBA heavyweight champion Povetkin. For Povetkin, this is little more than a fight for him to show off his skills to the British boxing public to get them primed for a fight between him and Joshua.

Povetkin wanted the opportunity to fight on the Joshua-Parker undercard to help make his fight with Joshua much bigger. Povetkin is already Joshua’s WBA mandatory challenger after beating Christian Hammer by a 12 round unanimous decision on December 15h in Russia. Povetkin doesn’t have to fight Price for him to get a title shot against Joshua. Povetkin wants to do this, and he’s fine with facing the 6’8” Price. He obviously believes he’ll beat Price and stay in his slot to fight Joshua for his IBF and WBA titles either later this year or in 2019.

”We’re nearly there [on announcing the fight]. [David] Price has agreed, [Alexander] Povetkin has agreed and we hope that by the end of this week we will be announcing Povetkin vs. Price at the [Principality] Stadium for the WBA Inter-Continental title [currently held by Povetkin] and the number one position with the WBA for Anthony Joshua,” Hearn said to the liverpoolecho.co.uk. “This is a massive opportunity for David Price, don’t blink in that one.”

The former British and Commonwealth heavyweight champion Price could get life changing money if he can defeat Povetkin and get a world title fight against Joshua. Price could make in the millions for a fight with Joshua, but he’ll need to get past Povetkin for that to happen. It’s a gamble for Price to face Povetkin on the Joshua-Parker undercard. Price has been knocked out 4 times in the last5 years to Christian Hammer, Erkan Teper, and Tony Thompson [x 2].

It must give Povetkin confidence that he can beat the 6’8” Price after seeing him mowed down by Hammer in 7 rounds last year in February. Price looked out of shape at 275, and he was ultimately stopped in the 7th due to him gassing out more than from anything spectacular that Hammer did in the fight. Price lost some of the weight, but he still didn’t look good in winning his last fight over little known Kamil Sokolowski by an unimpressive 6 round points decision win last December. Price was so tired at the end of the fight that he was barely able to conduct an interview. Even 5 minutes after the fight, Price was still gasping for breath while speaking to the media. It was troubling. because the fight was a one-sided affair that was fought at a slow pace. As bad as Price looked in that fight, he’s going to have major problems against Povetkin. The only thing Price has going for him is how bad Povetkin has been looking lately in his last 2 fights against Hammer and Andriy Rudenko. Povetkin’s punching power seems to have abandoned him, and he’s suddenly fighting his age and not like he’d been up until 2016. If Povetkin can’t knock Price out, he could fall victim to his big power shot. Price may have lost some hand speed and a lot of conditioning, but he can still punch with a lot of powr when he’s sitting down on his shots.

Povetkin has been trying to get in position to win another world title since losing his WBA heavyweight title to Wladimir Klitschko in October 2013. Povetkin has taken the hard road back to the top in defeating Manuel Charr, Carlos Takam, Mike Perez, Mariusz Wach and Johann Duhaupas, but was foiled by a positive drug test in 2016 that wiped out a title shot against WBC heavyweight champion Deontay Wilder that was scheduled for May of 2016 in Moscow, Russia. Whether Povetkin could have won that fight or not is unknown. Povetkin was still fighting at a prominent level at that point in his career, and he likely would have given Wilder all kinds of problems. Povetkin later tested positive for another drug before a scheduled fight with Bermane Stiverne in December 2016. That was cancelled as well. Povetkin ended up fighting replacement opponent Duhaupas, and he looked good in stopping him in the 5th round.

Unfortunately, that was the last time Povetkin looked great. In Povetkin’s last 2 fights against Rudenko and Hammer, he’s looked nothing like the fighter that destroyed Duhaupas. Povetkin fought slower and couldn’t sustain a fast-enough pace to knock Rudenko or Hammer out. Whether Povetkin was taking it easy on those guys or if he’s gotten old suddenly is the magic question. If Povetkin has lost something from his game, then Price could have a chance to win this fight and put himself in position for a big money fight against Joshua. Price is going to need to be able to fight hard in each round, because he might not be able to knockout Povetkin. No one has stopped the Russian fighter yet, not even Wladimir Klitschko. Povetkin is vulnerable to getting hurt from big shots as we saw in his loss to Klitschko. He was knocked down 4 times in that fight. Fighters sometimes get old quickly when they reach Povetkin’s age at 38. It’s possible that father time has finally caught up to Povetkin in which case he might lose to Price on March 31.

Hearn: Khan’s career will be over if he loses to Phil Lo Greco »