Gomez to talk with Canelo to decide on GGG rematch 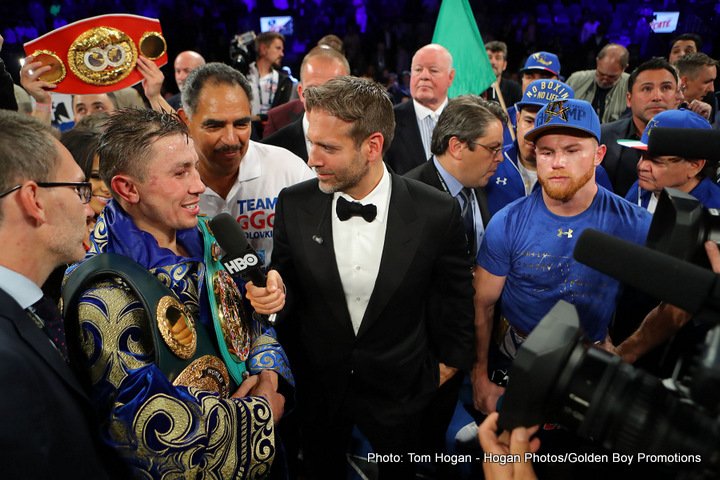 By Jim Dower: Eric Gomez of Golden Boy Promotions says he plans on having a sit down meeting with Saul “Canelo” Alvarez in the next few weeks to decide on whether they’ll be going ahead with the rematch with IBF/IBO/WBA/WBC middleweight champion Gennady “GGG” Golovkin for May 5 next year.

The negotiations for the Canelo-Golovkin rematch are ongoing, and there are fewer things to confirm for the rematch. Canelo, 27, will be the one that chooses whether the negotiations will precede or not after Gomez meets with him in the next 3 weeks. If Canelo chooses to stop the negotiations, then Golden Boy will look for another option for him for his next fight on Cinco de Mayo on May 5 in Las Vegas, Nevada. One of those options is David Lemieux, who is facing WBO middleweight champion Billy Joe Saunders on December 16. Lemieux is with Golden Boy promotions, and he’s well-known in the States. If Lemieux can get his hands on the World Boxing Organization 160 lb. title, it would setup an interesting fight between him and Canelo in early 2018. Winning the WBO middleweight belt would give Canelo added leverage at the bargaining table for the rematch with Golovkin.

Gomez has been working with Golovkin’s promoter Tom Loeffler on the negotiations for the rematch with Canelo. It seems like they’ve gone over most of the details, and are close to having an agreement on the rematch. The one thing that needs to be settled though is whether Canelo wants the rematch now. Nothing can be decided until Canelo gives his blessing to the fight. Of course, Golden Boy will lay out the options to Canelo for what fights he has available to him. It’s likely they’ll give him their view of what he should do next.

Given that Golden Boy promotions CEO Oscar De La Hoya has repeatedly brought up Lemieux’s name as a possible opponent for him in May, it’s highly possible that Golden Boy is interested in making a Canelo-Lemieux fight in early 2018 instead of the Golovkin rematch. That would mean that the rematch with Golovkin would be put on the shelf to let it marinate until September of next year or possibly until 2019. It all depends on Canelo and what options he wants to take. Canelo has pressure being put on him by the boxing public to make the GGG rematch, but he’s been immunue to pressure in the past. For 2 years the boxing fans worldwide called for Canelo to make the fight with Golovkin. It wasn’t until 2017 that Canelo finally faced him. Some fans feel this was a strategy by Golden Boy and Canelo to wait Golovkin out until he was older, and not as dangerous. To be sure, 2 years ago, Golovkin looked invincible at 33. It’s only recently that Golovkin has started to appear vulnerable.

”We’re talking. There’s one detail that has to be fixed and finalized and in the next few weeks we’re going to sit down with Canelo to present everything to him and he’s going to make the decision,” Gómez said to ESPN Deportes.

Besides Lemieux vs. Saunders fight that Golden Boy is waiting on, they also have WBO junior middleweight champion Miguel Cotto’s farewell fight with Sadam Ali on December 2. Those are both Golden Boy fighters, Coto and Ali. If Cotto can be persuaded to stick around for one more fight after the Ali match on December 2, then he possibly face Canelo in a rematch in May of next year. Canelo beat Cotto 2 years ago in November 2015 by a close 12 round unanimous decision. The fight did good numbers on HBO PPV in bringing in 900,000 buys. Those are good numbers compared to Canelo’s fights with Liam Smith and Amir Khan on HBO PPV. Cotto is supposed to be retiring after his fight with Ali, but if Golden Boy can tempt him with huge money for a Canelo fight, it’s possible those two could be facing each other in May.

Golovkin would be the casualty for Canelo going in a different direction for his May 5th fight next year, but there’s not much he can do about it. Canelo is the one bringing in the big money. It doesn’t matter who Canelo fights. He still brings in a lot of PPV buys. Golovkin will have to defend his titles against the best possible option. Golovkin can fight Jermall Charlo, Danny Jacobs, Sergiy Derevyanchenko and Ryota Murata. Those would be tough fights for Golovkin, and possibly even more difficult matches that a second fight with Canelo. Those are bigger fighters than Canelo, and more suited to the middleweight division than he is. Golovkin could lose to one of those guys. If that happens, Canelo and Golden Boy will miss out on a ton of money they could have made in the rematch with GGG. The rematch between Canelo and Golovkin could still happen, but the buy rate would likely be far fewer than it would have been.

Gomez says the venue for the Canelo-GGG rematch still needs to be decided. That’s going to wait until Canelo decides whether he wants to face Golovkin in May. The rematch could take place in Las Vegas, Los Angeles, California, and New York or at AT&T Stadium in Arlington, Texas. Loeffler and Golovkin both would like to have the rematch in Texas. De La Hoya likes the idea of putting the Canelo-Golovkin rematch in Las Vegas, which is where the two fighters fought last September. The controversial scoring for the fight last September left a bad taste in the mouth of Golovkin and Loeffler.

The judges scored the Canelo-GGG fight a 12 round draw. One judge had Canelo winning 10 rounds to 2. Another had the fight scored even at 114-114. Both of those judges saw a different fight from the boxing public, who generally thought Golovkin had won the fight in a clear manner. Golovkin and Loeffler don’t want to have to deal with scoring like that again in a rematch, and they would prefer not to risk fighting in Las Vegas again. Las Vegas has become a second home for Canelo in terms of where he now prefers to fight. He brings in a lot of money to the city each time he fights.