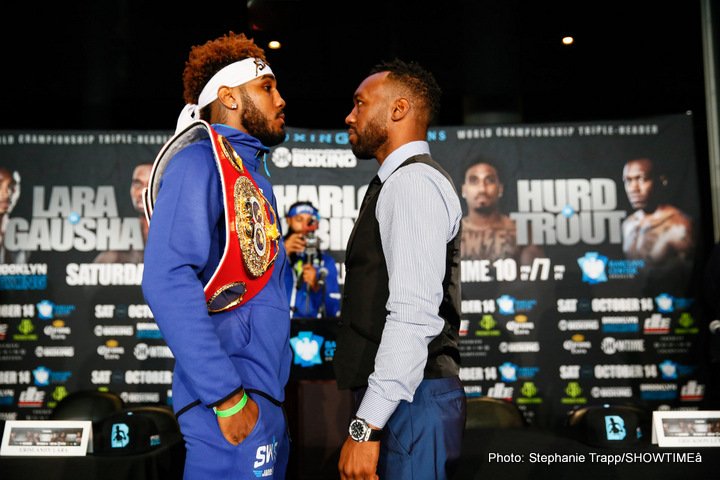 Hurd vs. Trout will be televised this Saturday on Showtime Championship Boxing. The start time for the televised portion of the card is at 10:00 p.m. ET/7:00 p.m. PT. Also on the card is WBC 154 lb. champion Jermell Charlo defending against #1 WBC Erickson Lubin and WBA Super World junior middleweight champion Erislandy “The American Dream” Lara fighting unbeaten Terrell Gausha.

The tripleheader helps setup important fights in the future between the winners of these fights. As such, you can call the tripleheader the start of a mini-tournament. The winners could face each other at some point soon. The losers go home and try to rebuild their careers as best as they can. The positive news about the guys that fail to win on Saturday is they’re still good enough to get other opportunities for world title shots.

Charlo, Lubin, Lara, Hurd, Trout and Gausha are all highly talented guys. Even if the losers of these fights come up short, they can still come back from the losses to get other big fights. Charlo, Lubin, Hurd and Hurd are all big enough fighters to move up to 160 and compete in that division. Charlo probably should probably already be fighting at middleweight, because he’s a very big junior middleweight like his brother Jermall, who recently moved up in weight to the 160-lb. division.

For this fight against Hurd, Trout will be coming off of a 17-month layoff since his defeat to former IBF junior middleweight champion Jermall Charlo last year in May. Trout wanted to fight a long time ago, but there haven’t been any quality fighters that were interested in fighting him during all this time. The good news is Trout is fighting for a world title against IBF champion Hurd.

That negative is Trout has lost almost 2 years of his boxing career with inactivity. Given how short the average boxer’s career is, it’s not good that Trout has lost so much time. Trout can’t afford too many more long layoffs like that if he wants to take advantage of the little time he has left in the sport. The inactivity may hurt Trout’s chances of beating Hurd.

Trout, 32, sees holes in the game of the undefeated 27-year-old Hurd that he can take advantage of on Saturday night. Trout, 5’9 ½”, doesn’t say what those holes are, but he seems to be pretty sure of himself that he’s going to be able to beat him and take his IBF title.

“We see holes in his game,” Trout said. “At the end of the day, it’s just going to end up being me and him and we have to punch through those holes.”

Trout has been trying to rebuild his career for the past 4 years since suffering a controversial 12 round unanimous decision loss to Saul Canelo Alvarez on April 20, 2013. Like Gennady “GGG” Golovkin, Trout found out how hard it is to defeat the highly popular Canelo Alvarez. Despite out-landing Canelo and keeping him pinned against the ropes for the last 6 rounds of the fight, Trout wound up losing to him. Trout lost his next fight after that against Lara by a wide 12 round unanimous decision on December 7, 2013. There was nothing controversial about that loss for Trout. He was simply outclassed by Lara. He didn’t have the talent, boxing skills or the chin to deal with the game of the Cuban fighter in that bout. After winning 4 straight fights, Trout was beaten by Jermall Charlo by a 12 round unanimous decision in his last bout over a years ago on May 21, 2016.

“We’ve knocked all the ring rust out in camp,” said Trout. “I’m peaking at the right time and I’m more than excited to be go out there and show everybody that not only am I a live dog but I’m championship material.”

Hurd will have a 3 1/2” height and a 4” reach advantage over Trout in this fight. That doesn’t mean that Hurd will automatically win the fight based on his height and reach, but it helps that he’s that much taller than Trout. Hurd, 27, is also 5 years younger than Trout, and he doesn’t have the mileage that he has. Physically, Hurd has a lot of things going for him in this fight. He’s bigger, stronger, younger and the more active fighter of the two. Trout brings experience and a lot of talent to the ring with him. Trout is also a southpaw, which could help him in the fight if Hurd isn’t comfortable with fighting southpaws.

“I’m not happy about it, but it is what it is,” Trout said about his long layoff from boxing. “But I thank God I’ve been in the gym and keeping in shape. Call it vanity or not, trying not to get fat and trying to keep this beach bod so I’m still sharp.”

Trout held the WBA 154lb title for a couple of years before losing the title to Canelo. During Trout’s time as the WBA champion, he beat Miguel Cotto, Frank Laporto, David Lopez and Delvin Rodriguez.

Hurd recently captured the WBA title earlier this year in defeating Tony Harrison by a 9th round knockout on February 25. It was a close fight going into the 9th round. Harrison, 6’1”, gave Hurd all kinds of troubles before he got tired and his chin gave out on him in the 9th round. At the time of the stoppage, Hurd was up on the scorecards 77-75, 77-75 and 76-76. That fight showed that Hurd is a good fighter, but also a very flawed one as well. Harrison had been knocked out by fighter Willie Nelson 2 years earlier in a 9th round knockout on July 11, 2015. The fact that Nelson did just as good as Hurd did against Harrison, suggests that he’s not that solid of a champion.

Hurd is beatable. Whether Trout has the talent to do the job on him or not is unclear. We’ll find that out on Saturday night. Trout gave Jermall Charlo all he could handle in their fight last year on May 21. Trout lost the fight by a 12 round unanimous decision, but he fought well in the second half of the contest after Charlo got tired and ran out of gas. In the first 6 rounds, it was terribly one-sided with Charlo landing at will on Trout. Surprisingly, Trout took Charlo’s best punchers without going down.

“I feel like I have the superior footwork,” Trout said. “I like my mental capacity as far as being able to adapt and figure him out. But besides experience, I can fight, too. No just box. I think he feels he’s the stronger guy. But I’m going to go ahead and test that and see if he truly is.”

Trout will need to fight Hurd if he’s going to get the win. He’s not going to out-box this guy over 12 rounds without mixing it up with him. Trout tried to beat Canelo Alvarez by boxing him, and it didn’t work. A lot of these judges focus more on the cleaner landing shots instead of the more numerous lighter punches. That’s one reason why middleweight champion Gennady Golovkin failed to get a win in his recent fight against Canelo. The judges like to see hard punching when it comes to them scoring the rounds for one fighter or another.

Wilder: Joshua needs to fight me in the U.S »