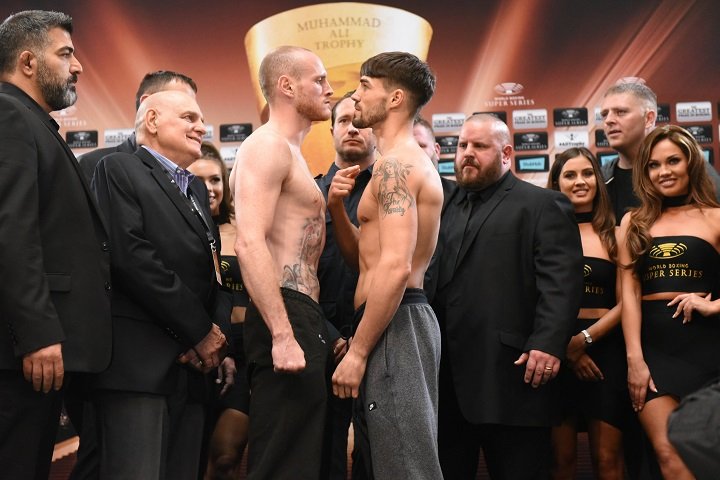 By Scott Gilfoid: George Groves and Jamie Cox both weighed in successfully on Friday for their fight this Saturday night in the World Boing Super Series tournament at the SSE Arena in London, England.

Groves, 29, will be defending his WBA Super World super middleweight title that he recently won last May in defeating Fedor Chudinov by a 6th round knockout. Cox is Grove’s handpicked opponent. Groves wanted Cox because he preferred that his first fight in the World Boxing Super Series tournament take place in the UK. There are 4 fighters from the UK taking part in the WBSS tournament and they are as follows: Groves, Cox, Callum Smith and Chris Eubank Jr. One fighter in the tourney is from the U.S in Rob Brant, 2 fighters are from Germany in Juergen Bvaehmer and Avni Yildirim and 1 fighter from Sweden in Erik Skoglund.

“I have worked hard all my life to become a world champion,” said Groves via the World Boxing Super Series pressor. “Now I will work hard to win the Muhammad Ali Trophy. I am in great shape, I have great experience and I know exactly what it takes to win this tournament. I can’t wait for Saturday night.”

It’s difficult imaging Cox pulling off the upset in this fight, because he’s so over-matched in this fight that it’s not even funny. Cox hasn’t looked good against the fodder opposition that his promoter has been feeding him for his entire 10-year pro career. Cox has been kept in the slow lane in terms of opposition, and he’s only now at 31 taking his first step up fight of his career.

This has got mismatch written all over it. It’s good for Groves to be defending his WBA title for what amounts to be a showcase fight, but it’s not a good deal for the boxing fans hoping to see a good fight. Cox would likely lose to everyone that Groves has fought in the last 4 years of his career, and I’m talking about EVERYONE. Cox doesn’t have the pedigree that the fighters that Groves has been beating. That’s the one major negative about Saturday’s fight between Groves and Cox. I don’t think Cox would beat past Groves’ opponents like Martin Murray, Badou Jack, Fedor Chudinov, Eduard Gutknecht, David Brophy, Andrea Di Luisa and Christopher Rebrasse.

“I am relaxed,” said Jamie Cox. “I have got my team, my friends, my family and my fans here. I am ready to go, I have trained hard for this. It is obviously my first world title fight and I am ready for the occasion. When I looked into George’s eyes, I saw a scared man. I am predicting a great, great win.”

Cox has looked less than confident in his recent interviews with the boxing media. He’s seen secretive, and entirely guarded during his interviews, as if he’s afraid he’ll lose the fight if he gives even a hint about what he’s going to be trying to do inside the ring on Saturday night. I don’t think it matters what Cox tries to do in this fight. Groves could give away the game plan for what he’s going to do in the fight, and Cox will still not win the fight. This is about levels.

Cox hasn’t fought any talented fighters during his career, and he’s likely been given a No.9 ranking from the World Boxing Association largely based on his unbeaten record than on who he’s beaten. That’s what’s wrong with the sport. The sanctioning bodies rank fighters all the time based on their unbeaten records rather than on who they actually have beaten during their careers. Based on Cox’s poor resume,

Personally, I don’t think Cox should be even ranked in the bottom 100. His record is filled with lesser opposition. The only guy on Cox’s entire resume with a shred of talent is Obodai Sai, and he should have lost to that fighter in their fight on September 9, 2011. If you saw that fight, Cox was outworked and pummeled by Sai. At the end of the fight, Cox was given a 12 round unanimous, and the crowd booed him loudly. The fight took place in London, England, and Cox was the home fighter. Sai was the visiting guy from Ghana, and yet he was the one that the boxing fans felt won the fight. Cox never fought Sai in a rematch, which is troubling, because he definitely should have. When you get a controversial decision win like Cox’s victory over Sai, it’s important that you go back and at least try and erase the stain of the controversy by showing the boxing fans that you deserved the win the first time around. Cox didn’t do that though. He instead has gone completely soft with his opposition in his fights ever since that ‘win’ over Sai.

These are the fighters that Cox has beaten since the Sai fight:

The journeyman Kandelaki was the last guy that Cox beat on July 23 of this year. It’s hard for me to understand how an unbeaten fighter with 10 years of experience in boxing is STILL fighting a guy like Kandelaki at this point in his career. It’s hard to understand why Groves would want to fight Cox when you look at the guys’ resume. Groves could have picked out anyone in the WBA’s top 15 that would have been more deserving of a world title shot than Cox in my opinion.

I would have liked to have seen Groves fight one of these contenders:

Groves is in a no win situation by fighting Cox. Even if Groves looks sensational in defeating Cox, the boxing fans aren’t going to give him much credit because he’s facing a guy so far out of his league. 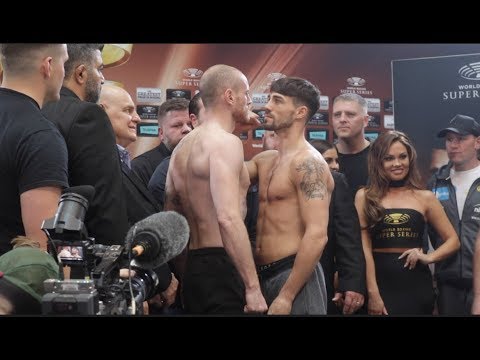 
« Groves and Cox on the scales: Cox saw a scared man