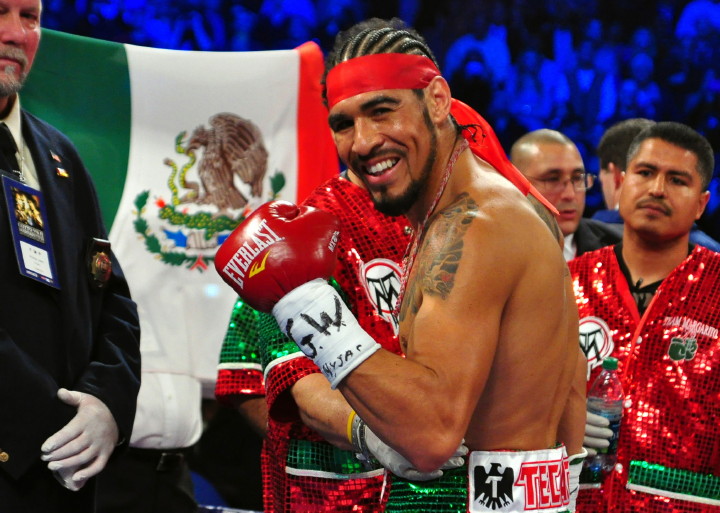 By Dan Ambrose: Antonio Margarito (40-8, 27 KOs) is counting on fighting a viscous war with Carson Jones (40-11-3, 30 KOs) tonight in their 10-round scheduled bout at the Gimnasio Manuel Bernardo Aguirre, in Chihuahua, Mexico. Margarito-Jones will be televised tonight on Beinsports espanol.

Margarito, 39, has been out of the ring for over a year since his win over Ramon Alvarez on August 13, 2016. Margarito is counting on the 31-year-old Jones standing and going to war with him for 10 rounds rather than running around the ring. Jones is not a mover, so Margarito has a fair chance of getting the brawl that he craves for this fight.

Margarito weighed in at 154 pounds for Friday’s weigh-in. He looked in good shape. Jones also came in at 154 lbs. During the face off, Margarito towered over Jones, staring down at him and looking confident. Jones looked a little intimidated. It’s perhaps the confidence from Margarito that seemed to throw him off.

Margarito is still hoping he can shine tonight in beating Jones to earn a world title shot against WBO junior middleweight champion Miguel Cotto. That would seem like a real long shot at this point though. However, anything is possible in boxing.

“I’m at my best level in years and in condition to fight 10 strong rounds,” Margarito said. “This fight is important for my plan to again become world champion. I want to fight Miguel Cotto in a third and final fight and Jones will not stop me.”

A win for Margarito over Jones will certainly get the attention of the sanctioning bodies. If Margarito can keep winning, he could eventually get a high enough ranking for one of the champions to fight him. As far as fighting Cotto goes, that’s not happening for Margarito. Cotto won’t likely do Margarito a favor in fighting him a third time. There’s no money for Cotto in taking that fight, and it’s doubtful HBO would want anything to do with televising a third fight between Cotto and Margarito.

Cotto is retiring in December, and he wants his last fight to be on HBO PPV. That means he’s got to fight either the winner of the Saul Canelo Alvarez vs. Gennady “GGG” Golovkin fight or David Lemieux. Those are Cotto’s options. I wouldn’t say that Cotto’s chances of getting the Canelo-GGG winner are good for December. Cotto isn’t in the position to tell those two fighters when they must fight him. Cotto can hope that they’ll want to fight him in December, but I can’t see it happening. I think that’s a pipe dream on Cotto’s part, just it’s a pipe dream for Margarito to hope that he’ll get a third fight against Cotto.

There isn’t much of an undercard for the Margarito-Jones. It’s mostly obscure prospects. Saul Canelo Alvarez’s brother Ramon Alvarez is fighting on the undercard against Johnny Navarrete at middleweight. Margarito already beat the 31-year-old Alvarez in his last fight over a year ago. However, the presence of Alvarez on the undercard would seem to suggest that a rematch between him and Margarito is very likely. Margarito wants to fight Canelo or Cotto, but he may need to settle for facing Ramon Alvarez in a rematch. That would be a 50-50 fight. Margarito had a lot of problems with Alvarez last year.

Margarito previously, held the IBF/WBA/WBO welterweight titles many years ago in the earlier part of his career. The 5’11’ Margarito was a real terror when he was at his best, typically throwing over 100 punches per round in his fights. Margarito has wins over the likes of Kermit Cintron, Miguel Cotto, Joshua Clottey, Golden Johnson, Sebastian Andres Lujan, Roberto Garcia, Antonio Diaz, Frankie Randall, Sergio Martinez and Buck Smith. Margarito struggled when he fought better fighters like Paul Williams, Shane Mosley, Manny Pacquiao and Daniel Santos.

Margarito lost to Cotto in a rematch in 2011 after his surgically repaired eye swelled shut. Margarito wants one more fight against the 36-year-old Cotto. This would be an exciting time for Margarito to get a fight against Cotto, as the Puerto Rican fighter just captured the vacant WBO 154 lb. title last Saturday night with a 12 round unanimous decision win over Yoshihiro Kamegai on HBO World Championship Boxing.

Margarito’s reputation took a hit with the hand wrap incident before his fight against Shane Mosley 8 years ago in 2009. Margarito lost his boxing license for over a year. When he did come back, he beat Roberto Garcia before losing to Manny Pacquiao by a 12 round unanimous decision in 2012. Margarito suffered an eye injury in the Pacquiao fight. Margarito should have stopped fighting after he sustained the injury, but he stayed in there for the full 12 rounds. Pacquiao seemed to let up on Margarito in the second part of the fight by using movement to stay away from him. Margarito had also hurt Pacquiao with a body shot in the fight that seemed to make him less willing to brawl.

Margarito’s surgically repaired eye looks bad. It appears slightly sunken in. It’s unclear if Margarito is risking losing his eye site with that eye by continuing to fight. Margarito retired from boxing after his loss to Cotto in their rematch in December 2011. Margarito stayed retired until coming back in early 2016 to fight Jorge Paez Jr. and Ramon Alvarez. Margarito did not look good in either of those fights. However, he hasn’t impressed since his win over Roberto Garcia n 2010. That was a long time ago. If Margarito can fight like that tonight, then it’s going to be an easy win for him over Carson Jones.

“We are going to win in a clear way,” said Margarito, 39. “The fans are going to see the best version of Margarito and we are going to give you a great fight. I had a great preparation without any problems. I feel like I’m at my best. Power, speed and rhythm are like when I was world champion. I hope Jones comes to fight and not to run, and the fans will see a great fight that I’ll win overwhelmingly.”

Margarito can’t possibly be at his best with him coming off a 1-year layoff from boxing. He looked terrible before he took the long layoff in his fights against Alvarez and Paez Jr. Margarito’s hand speed is slower than it used to be, and he doesn’t have the incredible punch volume that he had during his best years in the sport. During his prime, Margarito could throw over 100 punches per round on a consistent basis. It didn’t matter that he never a huge puncher. Just the fact that Margarito would throw over 100 punches per round, it would wear down his opponents.

Margarito’s nickname “El Tornado de Tijuana” was totally fitting for him during the prime of his career. Cotto was worn down by Margarito in their first fight. Even in their rematch, Margarito looked like he was starting to get to Cotto with his nonstop aggression. It was perhaps lucky for Cotto that Margarito’s eye swelled close, causing the fight to be stopped by the ringside doctor’s advice.

In his prime, Margarito had Cotto’s number. I have no doubts that if Margarito was still fighting at the level he was at in 2008, he would stop Cotto without any problems in a third fight. Cotto’s face was looking swollen in his fight against Kamegai last Saturday, and the Japanese fighter wasn’t throwing a lot of punches. Cotto seemed very uncomfortable with Kamegai being in front of him at all times. Cotto got away with a lot of shoving in that fight. It was surprising that the referee let him shove Kamegai so frequently without addressing the issue. It’s likely Cotto would try the same thing against Margarito if the two of them were to face each other in a third fight. Cotto would likely win, but you couldn’t’ rule Margarito out from getting another knockout. Cotto does not handle pressure well. If the referee kept Cotto from shoving Margarito repeatedly like he did against Kamegai, I could see Margarito stopping Cotto.

Jones, 31, is a decent journeyman level guy, with a win over British fighter Brian Rose 2 years ago. That was the best victory of Jones’ career. He was arguably robbed in his first fight with Kell Brook in 2012 in losing a 12-round majority decision in Sheffield, England. Brook stopped Jones in the 8th round in their rematch in July 2013.

Jones also lost to Rose in his rematch in August 2015 in getting beaten by a 12 round unanimous decision. Jones is now well-known in the UK from his 2 fights with Brook and Rose. Las year, Jones fought British domestic level fighter Ben Hall, beating him by a 6th round knockout on November 26. It’s likely that Jones will continue to be brought back to the UK in the future to periodically fight domestic level opposition that needs a name fighter to test their skills on.

“I’m a better boxer, more speed, better rhythm and youth compared to Margarito,” Jones said. “I not only come to win, I come to get into the world rankings and to retire an icon of Mexican boxing.”

Jones could win if Margarito isn’t in top form tonight. Jones is easy to hit, and his boxing ability is suspect. Margarito can probably out-box Jones if he chooses to stay on the outside and use his jab. Margarito can box well when he wants to. That would be the smart thing for him to do if he can’t overwhelm Jones with punches in the first few rounds. Margarito can throw a lot of punches even at his age, but I don’t know if he’ll be able to sustain a furious pace long enough for him to knockout Jones tonight.

“I reiterate: I will win Saturday,” said Margarito. “It will be a great fight and then I’ll force Miguel Cotto to retire in December. That rivalry isn’t over. He hits like a girl and knows that he was helped in the second fight, but right now my focus is Jones.”

De La Hoya: Canelo has something to prove against Golovkin »