Robert “The Ghost” Guerrero hangs up his gloves 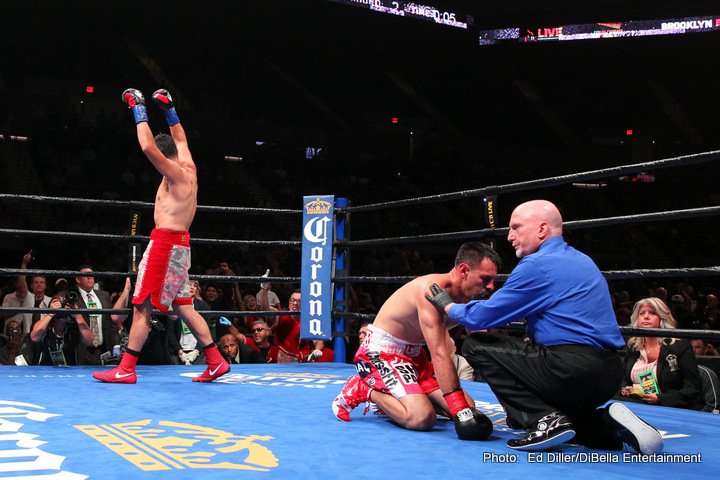 By Dan Ambrose: In a predictable move, Robert “The Ghost” Guerrero retired from boxing on Monday following his 3rd round knockout loss to Omar Figueroa Jr. last Saturday night at Nassau Coliseum in Uniondale, New York. If there was ever any doubt whether the 34-year-old Guerrero (33-6-1, 18 KOs) should hang up his gloves, it was erased with him getting dropped 5 times by Figueroa Jr. in his 3rd round knockout loss.

It would have been interesting to see what Guerrero could have done against Figueroa Jr. if he had fought a smarter fight by using his outside fighting skills. Guerrero got caught stuck with the wrong game plan against Figueroa Jr., and he failed to make the adjustments that needed to be made. Whether that was Guerrero’s trainer’s fault or his own, it’s unclear.

It was pretty obvious going into the fight that Guerrero needed to stay on the outside. He was hammered by David Peralta, Aaron Martinez, Danny Garcia, Keith Thurman and Yoshihiro Kamegai when he was on the inside against them. Guerrero should have learned that he’s not a good inside fighter to beat the top tier opposition at 147. Figueroa Jr. isn’t even a welterweight. He’s a 140lb fighter, but he was still able to take advantage of Guerrero’s sloppy inside fighting skills.

Guerrero had problems on the inside even when he was fighting at featherweight. The reason Guerrero was able to do well in that division was because of his size and the fact that he didn’t fight a lot of high quality guys. Back there weren’t talented featherweights like Oscar Valdez, Leo Santa Cruz, Gary Russell Jr., Abner Mares, Scott Quigg and Carl Frampton in those weight classes.

”I want to thank God for allowing me to have a wonderful career,” said Guerrero. “I’m a kid from a small town in Gilroy, California, who made it to the mountain top of the boxing world. When I was a young kid growing up, I always believed in myself, but never in my wildest dreams would I have imagined a small-town kid like myself, would be fighting in front of millions of fans.”

The defeat by Guerrero was loss No.5 in his last 7 fights. Guerrero started his professional boxing career in 2001, and fought well in winning titles at featherweight and super featherweight. At 5’8”, Guerrero was able to use his height and reach to get the better of his opponents at 126 and 130. Guerrero moved up to lightweight in 2010, and fought well in that division in defeating Efran Hinojosa, Robert David Arrieta, Joel Casamayor, Vincente Escobedo and Michael Katsidis.

If Guerrero had stayed at lightweight, he probably would have had a long reign in that weight class. He had the size and the talent to dominate at 135. You can argue that Guerrero got a little greedy, because he quickly moved up 2 divisions to welterweight, and he found immediate success in beating Selcuk Aydin and Andre Berto in back to back fights. Those wins were pretty the last hoorah for Guerrero, considering that he lost badly in a dream fight against Floyd Mayweather Jr. in May 2013.

Guerrero got a good payday in losing that fight to “Money” Mayweather. Guerrero then made the mistake of staying out of the ring for an entire year following his loss to Mayweather. That wasn’t a smart move. Guerrero should have continued fighting. When he did come back, he won a grueling 12 round unanimous decision victory over Japanese slugger Yoshiro Kamegai on June 21, 2014. Guerrero made the same mistake against Kamegai that he did against Figueroa by fighting him on the inside the entire fight and taking a lot of punishment. Fortunately for Guerrero, Kamegai wasn’t as good at fighting on the inside as Figueroa Jr. despite being a bigger puncher as him. Kamegai wasn’t hitting Guerrero with uppercuts the way that Figueroa Jr. was.

In dissecting the loss for the 34-year-old Guerrero, he made a couple of tactical mistakes in the fight that led to him getting knocked out by the 27-year-old Figueroa Jr. The first mistake was Guerrero choosing to fight Figueroa Jr. on the inside where he’s very good. Guerrero played to Figueroa’s strengths by fighting him on the inside. The second mistake Guerrero made was he was frequently looking away to the side when he was throwing shots. He wasn’t concentrating on watching Figueroa’s arms to track the punches he was throwing.

The result was, Figueroa could frequently hit Guerrero with shots that he never saw coming. Figueroa Jr. isn’t a big puncher, but he needed to be. With Guerrero not looking at Figueroa’s arms, he was getting hit with shots that were unexpected. That made the shots much more powerful than they would have been. The real question is why a professional like Guerrero didn’t make adjustments after the 2nd round to stay on the outside. Guerrero and his trainer should have realized that he needed to stay on the outside and not let Figueroa Jr. land his uppercuts in close, which was really the only he could win the fight. Figueroa is not a great outside fighter. His whole game is to fight on the inside.

It’s too bad that Guerrero couldn’t have learned to be more disciplined in the ring by using his size to fight on the outside. Guerrero’s father/trainer Ruben Guerrero should have rebuilt him by moving him back down in weight to the lightweight division, and had him fighting only on the outside. Guerrero looked good last Saturday when he was using his skills to fight on the outside. It was only when he decided to stay in close where he would have problems with Figueroa Jr. It would have been a much different fight if Guerrero had fought smart instead of brawling with Figueroa Jr. at close range. Guerrero was knocked down three times in round 2 and two times in round 3. The fact that Guerrero even made it to the 3rd round was a miracle, as he was hurt badly in the 2nd. The referee gave Guerrero a big break in not stopping it in the 2nd.

The victory for Figueroa Jr. temporarily has his career looking good. I don’t see it staying that way for long. As soon as Figueroa Jr. fights someone good like Julius Indongo or Terence Crawford, the party will be over. Figueroa Jr. will be brought back down to early and exposed. Those guys wouldn’t fight a dumb fight the way that Guerrero did by fighting Figueroa Jr. on the inside. They would fight him at a distance and out-box him and possibly stop him with single pot shots to the head. I don’t know why an experienced fighter like Guerrero didn’t take advantage of his ring knowledge to box Figueroa Jr. from the outside.