Mikey Garcia: I’ll move back down to 135 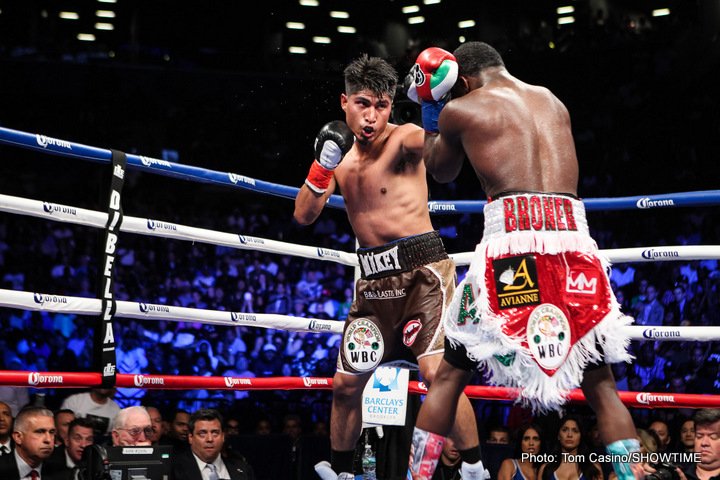 By Dan Ambrose: Despite beating Adrien “The Problem” Broner (33-3, 24 KOs) in a one-sided fashion in defeating him by a 12 round unanimous decision last Saturday night, Mikey Garcia (37-0, 30 KOs) doesn’t plan on sticking around at 140 to challenge the winner of the August 19 unification fight between WBC/WBO light welterweight champion Terence “Bud” Crawford (31-0, 22 KOs) and IBF/WBA champion Julius Indongo (22-0, 11 KOs).

Mikey is going to scat from the 140lb division and go back down to 135. You can form your own opinions as to why Mikey has made this decision. Is it fear of getting beaten and exposed by Crawford or Indongo or does Mikey believe that a unification fight against Robert Easter Jr., Terry Flanagan or Jorge Linares would be a bigger fight for him? I don’t see how any of those fights would. Mikey fighting the winner of the Crawford-Indongo is MUCH bigger than facing lightweight champions Easter Jr., Flanagan or Linares.

“I had a very good night tonight. Adrien Broner, he’s a tough fighter,” said Mikey at the post-fight press conference last Saturday night. ”He’s a great champion but I was the better fighter tonight. I’m just very happy with the way things turned out for me. I felt really comfortable at 140 right now. I felt my power was still there, my speed, my reflexes. My power doesn’t carry on but I feel strong. If there’s an opportunity at 135, I’ll do that. I’ll move down to 135.”

Mikey’s power was there, but it wasn’t the kind of power that does damage at 140. Mikey was hitting Broner with the power of a lightweight, and it wasn’t nearly good enough to hurt him. Had Broner not been so weight drained from going through a serious weight loss to get down to the 140 lb. contractually agreed weigh-in limit, the fight would have been different. Broner looked just like Oscar De La Hoya looked when he fought Manny Pacquiao in 2008. De La Hoya looked emaciated and half-starved in that fight, and there was no way that he could mount any type of offensive attack against the youthful and blistering fast Pacquiao.

Broner took off too much weight to get down to the 140 lb. weight limit. Frankly, I think Broner was scared of having to pay the steep $500,000 weigh-in penalty that was part of the contract for that fight. But I believe that Broner started training camp way too heavy, and he then went overboard the way that a lot of fighters do when they have an important fight. Instead of fighters doing what they’ve always done in the past to get prepared for a fight, they tend to do more, thinking that it’ll make them better. That’s not how it works in boxing. You can’t do more and think you’re going to get better results. You have to stick with what brought you to this point in your career.

Broner, 28, looked over-trained and BADLY weight drained for the fight. The size difference between Broner last night and the Broner that fought Khabib Allakhverdiev in 2015 at 140 was shockingly different. Broner looked 15-20 pounds heavier when he fought Allakhverdiev than he did last night. The difference was, Broner didn’t have the $500,000 weight penalty hanging over his head when he fought Allakhverdiev like he did last night. That’s why it was a mistake for Broner to agree to the weight penalty. The management for fighters put those things in for a reason. It gives them an edge, a big edge. Broner was popular enough to reject the $500K weight penalty. I don’t know why he ever agreed to it. He probably would have gotten the fight anyway. Even if Broner didn’t, he would have avoided an embarrassing loss to Garcia. I think it’s better to skip a fight if the contract is asking for a weight penalty. What we have now is Broner having been beaten in a one-sided manner, and that likely will hurt his marketability in boxing. Had Broner not agreed to the weight penalty, he might have been bigger, stronger and given himself a better chance of winning.

If Lomachenko is going to fight Mikey, then he needs to get him to agree to a rehydration clause to keep him from rehydrating over a certain weight, because he looked huge last night against Broner. Garcia looked like the bigger fighter in terms of size. It’s no good for Lomachenko if he has to fight Mikey with him weighing over 150 on fight night. Lomachenko and his management might want to ask for a weight penalty of their own by putting in a $500,000 weight penalty to make sure that the two fighters can’t be over 145 pounds on the night of the fight.

Garcia doubts super featherweight champion Vasyl Lomachenko will move up to lightweight to fight him. “I don’t see him making the move up at 135. If he’s serious about it, he can come give us a phone call.”

I think that would be fair to both. We’d see another weight penalty like the one that existed for the Broner-Garcia fight, but it would even the playing field. Mikey is a big fighter. They need to bring his weight down to closer to that of Lomachenko for the fight to make sense. You wouldn’t want to see Lomachenko outweighed by 20 pounds on fight night facing Mikey.

What happened to Mikey’s power? His trainer Robert Garcia has been saying for months that he’s been told that Mikey hits harder than Marcos Maidana. I didn’t see that last night. From what I saw, Mikey’s power looks more like the kind of power that we see in light welterweights like Adrian Granados and Rances Barthlemey. Mikey’s power is nothing special at 140. He clearly doesn’t punch with the same kind of power that Crawford, Indongo or Kiryl Relikh has. Those guys can all punch. Mikey is a more of a midlevel puncher at the light welterweight level. That doesn’t mean that Mikey can’t succeed at light welterweight. But it does mean he would need to put more emphasis on boxing, moving, jabbing, and tying up his opponents.

Spence says Broner will bounce back from defeat »