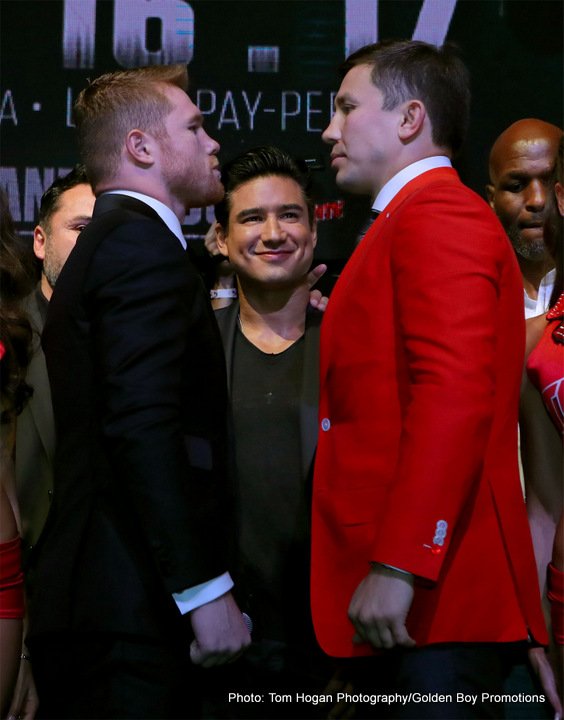 By Jeff Aranow: Saul “Canelo” Alvarez (49-1-1, 34 KOs) has apparently sized up 35-year-old IBF/IBO/WBA/WBC middleweight champion Gennady “GGG” Golovkin (37-0, 33 KOs), and he’s now guaranteeing that he’s going to be knocking him out on September 16 in their fight on HBO pay-per-view at the T-Mobile Arena in Las Vegas, Nevada.

Canelo has already been saying he’s going to win the fight, but it’s news that he’s now guaranteeing a knockout win. That’s a little different. It’s unclear what has sparked this new bold prediction from the 26-year-old Canelo. He must have seen something in Golovkin’s recent fights for him to be guaranteeing a knockout.

Canelo has never knocked out any of the only 4 good fighters – Erislandy Lara, Miguel Cotto, Austin Trout and Floyd Mayweather Jr. – he’s faced during his boxing career. Canelo didn’t even knockout Julio Cesar Chavez Jr., who looked like a zombie on the night of their fight on May 6 last month.

“This fight, I don’t see it going 12 rounds,” said Canelo to TMZ.com about his fight with GGG. “I can almost guarantee it won’t make the 12 rounds. It will end by knockout,” said Canelo.

When asked if he’ll be the one knocking out Triple G, Canelo said, ”Yes, without a doubt.”

To get a knockout, Canelo will need to fight in a certain way for him to sit down on his shots with enough power to hurt Golovkin. The one drawback to Canelo shooting for a knockout over Gennady is it will leave him open to taking the big shots from the Kazakhstan knockout artist. Golovkin is a better knockout artist than Canelo. There’s no comparison. You only have to look at Golovkin’s percentage of 89 to Canelo’s 67% to see that Golovkin is the one that has a great chance of getting a knockout in this fight.

It’s the size of Golovkin that will be a real danger to Canelo. Golovkin is so much bigger than Canelo in terms of his frame. Canelo might wind up heavier than Golovkin on the night of the fight, but Golovkin is the guy with more height and the sturdier looking frame. Golovkin looks like he’s built to throw with major power.

Canelo looks more like a shorter fighter that is designed to knockout smaller guys. Golovkin has already shown that he has more power than guys that are bigger than him. He’s a fighter that has unreal power for his size. There’s something very different about Golovkin as far as his strength goes that other fighters don’t possess. Golovkin comes from Eastern Europe where he stood out above the countless fighters in that area of Europe. Canelo doesn’t have that kind of power that Golovkin carries. Canelo is more of a fighter that boxes and has decent strength when he was fighting at 154. Now that Canelo is at 160, he’s just an average puncher and not a powerhouse.

It might be a mistake for Canelo to continue to view himself as a knockout puncher now that’s he’s moved up to middleweight. Canelo needs to see himself in a more realistic manner. Canelo’s recent fight against Chavez Jr. showed clearly that he’s NOT going to be a knockout puncher at 160. It’s not going to happen. Canelo wasn’t a big puncher at 154. Canelo was more of a guy that would get knockouts by hitting over-matched, smaller opposition over the course of his fights.

At 154, Canelo didn’t knockout the best fighters in the division. He didn’t knockout Erislandy Lara or Austin Trout. Both guys went the full 12 rounds with Canelo. Canelo never fought Jermall Charlo, his brother Jermell, Demetrius Andrade, Jarrett Hurd, Erickson Lubin or Julian “J-Rock” Williams. Could Canelo have knocked out those guys? It’s doubtful. He might have been able to knockout one or two, but it’s difficult to picture Canelo stopping the Charlo brothers, Andrade, Lubin or Hurd. Those guys are pretty solid fighters.

Here are Canelo’s knockout wins in fighting at 154:

Canelo not bothered by Mayweather-McGregor fight

Canelo doesn’t seem to realize that the Mayweather vs. McGregor fight can badly hurt the pay per view sales for his fight with GGG. Mayweather-McGregor is a fight that will possibly go for a lot of money at $100 per household on PPV. The fans that purchase the fight will be paying out a lot to see it. Canelo-Goiovkin will be coming along 3 weeks later on September 16.

If the boxing fans are already broke from paying for the expensive Mayweather vs. McGregor fight, then they might choose to cut back on their expenses by choosing not to purchase the Golovkin and Canelo fight for $70. If the fans purchase both fights, they would be looking at a cable bill of $170 for just PPV alone on top of what their normal monthly cable bill is. For many boxing fans, they’re going to make a calculated decision to choose one fight but not both.

Since the Mayweather vs. McGregor fight comes before the Canelo-Golovkin match, it would seem more likely that the first fight will be the one that the fans overwhelmingly pay to see. There’s also the hangover that some boxing fans will have if the Mayweather-McGregor fight turns out to be a real disappointment.

The casual boxing fans could steer away from purchasing the Canelo-GGG fight out of fear of being burned again. The hardcore fans obviously know better. They’ll choose to pay to see Canelo vs. GGG because they’ll recognize that it’s the far better fight than the event between Mayweather and McGregor, which bits the sport’s best fighter against a novice making his pro debut in boxing. But it’s the casual fans that will be the ones that decide not to pay to see the Canelo and GGG fight if they’ve spent all their money on Mayweather-McGregor or if they’re angry at feeling ripped off by the fight.

“No interest whatsoever,” said Canelo when asked if he’d be interested in fighting Conor McGregor. “If we were talking some level of business, that’s different, but for the sport, not at all. I respect boxing, and I wouldn’t disrespect it that way,” said Canelo.