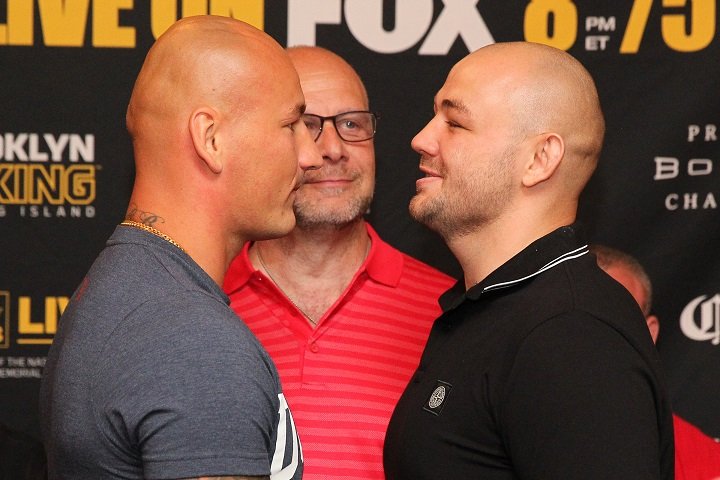 Former title challenger Artur Szpilka and unbeaten Adam Kownacki squared-off for the first time at a press conference in Brooklyn Wednesday as they prepare for their Polish heavyweight showdown featured on Premier Boxing Champions on FOX and FOX Deportes Saturday, July 15 in the first boxing event at the newly-renovated NYCB LIVE, home of the Nassau Veterans Memorial Coliseum.

Televised coverage begins at 8 p.m. ET/5 p.m. PT and is headlined by a welterweight brawl between former world champions Omar Figueroa and Robert Guerrero plus a matchup of unbeaten light heavyweights Marcus Browne and Seanie Monaghan.

Szpilka and Kownacki spoke to press at Krolewski Jadlo Restaurant in Greenpoint, Brooklyn before heading to Johnny’s Café in Queens for a meet and greet with fans.

Here is what the participants had to say Wednesday:

“Everything has been different this training camp. I’m focused on training for Adam Kownacki. I’ve lost some weight and I feel faster. Everything is feeling perfect.

“I want to show the world and my country that what happened in the Wilder fight was an accident. I feel ready and I can’t wait.

“The sparring has been perfect for this camp. I have two great sparring partners who are giving me different looks and getting me ready for Adam. I’m glad that I’ve been pushed really hard in sparring.

“I’m not worried about fighting in his hometown. I’m only focused on the man who is in front of me. It’s my job to go in there and take care of the man trying to knock me out.

“I have heard the talk from Kownacki about my chin, but there is nothing that he can say once we’re in the ring. On July 15 everyone will see my power and it will verify that I am the better fighter.

“We have talked a lot today, but on July 15 only our fists can talk and I can’t wait to perform in front everyone. I will show the whole world that I am ready for another shot at the world title.”

“I’m feeling great right now. I was in Poland for four weeks to spar with Tomasz Adamek and I think that helped me a lot. Now I’m back here with my team to finish up camp and work on preparing for a tough southpaw.

“I think I’ll be able to control my emotions on fight night. This is another fight in my long career. I have to go and do my best. This is a big step on my way to becoming a world champion and making my dreams come true.

“I think that styles make fights. My style is perfect for his style. I come forward and bring pressure and he’s been dropped so many times, I think his chin is probably gone. It’s hard to recuperate from a knockout like he had against Wilder.

“We’ve been working on everything we can in the gym. Knowing how to cut off the ring against a lefty is definitely very important. I’m getting better every day and with every sparring session. I’ll be ready on July 15.”

“This is a big chance for me to shine. I wish Artur all the success in the world, but it’s my time right now. July 15 you will see a great fight.”

“Artur is at the level where he’ll fight anybody in the world. We know how god Adam is. It’s going to be skill against skill.

“Training camp has been going great for Artur. He’s been having some really good sparring with some strong fighters who can simulate what Adam is going to do.

“Szpilka is in great shape right now, he’s ready to go. We’re going to make sure he doesn’t make the same mistake from the Wilder fight. He’s watched the tape and he knows what to do.”

“I’m thankful that Adam has this opportunity. I grew up on Long Island so it’s a dream come true to be a part of this event.

“This is going to be a great fight for the fans. The way people get behind their soccer teams, we will see that on July 15 from the Polish fans. It’s going to be a hell of a night.

“Adam is training so hard and he’s ready to go the distance. We’re ready for a war. Artur fought for a title recently so we couldn’t ask for a better fight. If we get this win, there are big things ahead for us.”

“It’s great to be here in Greenpoint where there is such a great Polish population and they understand the significance of this fight. This is the biggest fight you could make between two Polish heavyweights.

“Artur was a lifelong resident of Poland, who now has ties in Houston training with Ronnie Shields, while Adam is on the rise as an American Polish kid from Brooklyn and now living on Long Island. This is the first time in 31 years that there will be a big show on Long Island. Anybody that knows boxing knows that this is going to be a great fight.

“The winner of this fight is right there contending in the heavyweight division. Artur fought a great fight against Deontay Wilder before getting caught. They’re both warriors. This is a chance for Adam to prove himself. This fight has been brewing for a long time and there is a lot of pride at stake here.”