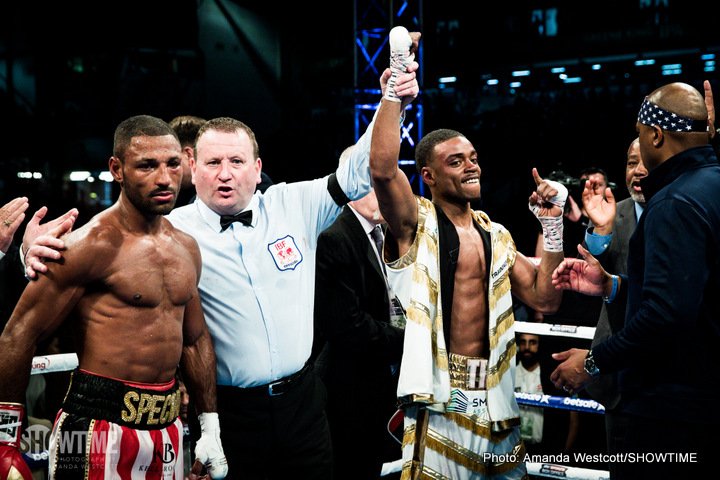 By Damian Poole: Bramball Lane, May 27th witnessed the crowning of the new IBF Welterweight champion – Errol Spence Jr. (22-0, 19 KOs), who defeated the brave and talented Kell Brook (38-2, 25KOs) in front of 27,000 British fans. A couple of questions I wish to address in this article are: Was Spence too much for Brook? Is all the Spence hype justified? Or was it a case of a lucky one in a million shot? First thing is first, part of being British is keeping a stiff upper lip, walking around with a crumpet up our backside, and admitting when one is wrong. So, I would like to take this opportunity to say… The best man won on that night. Congratulations to the new IBF champion, Errol Spence Jr and his team.

I personally don’t have much experience of being an author/writer or blogger but I do have a passion for boxing. I feel it is my duty to follow up on my previous article which I am sure many of followers on this website are aware of. So, I hope my piece sheds some light on something we can all agree on – it was a great night for boxing.

There were many surprises in this fight that I did not expect to see. I thought Spence was going to be the aggressive dominant boxer, coming forward and trying to push Brook back on the ropes all night. This was the case but only after Brook’s eye socket was broken in the 7th – 8th round. For the majority of the fight brook was coming forward and pushing Spence back on the ropes. When the two came together and clinched. Brook looked to be the stronger of the two and was able to hold Spence with relative ease. Again, this is something I thought Spence would have been stronger at or at least be able to stop Brook from doing. I personal thought Spence looked superb with his counter punches. Normally this would be an area where I would have to back Brook as he is a superior counter puncher. On this night, Spence was “on-point” by outperforming Special K in his normally dominant area.

• Round one: Was a close one to call. I would give it to Spence with the better work on the side. But both boxers looked somewhat timid and seemed to be testing one another.

• Round two: I gave to Brook with the better work rate, power shots, being able to judge the distance, as well as timing better.

• Round Three: Again, another close call. Spence started off fast landing some good shots on Brook but as the round carried on Brook came into his own. Eventually backing Spence into the ropes and landing some power shots that. Round 3 could have gone either way but I gave it to Spence.

• Round Four: Both boxers worked hard. Spence landed jabs and swung wide with power shots. Brook worked well on the outside and was able to cut Spence’s lip. In the last 40 seconds of fourth round, Brook was able to land a flurry of hard punches which backed Spence up. Brook was starting to having the final say in the exchanges. I gave this round to Brook.

• Round Five: I gave to Brook again as he clearly took control. He was able to man handle Spence, even landing some shots that knocked Spence off-balanced. We saw this in the last 52 seconds of the round, Brook landed a staggering right hook while pushing Spence back on the ropes.

• Round Six: Another very close one I would say. Spence came out fast landing some nice body shots and counter punches. While Brook tried to take control of the centre ring. But late in the round Brook stunned Spence with some body shots, an uppercut and combos which backed Spence on the ropes again. I gave this round to Brook.

• Round seven: I gave to Spence because Brook looked hurt and his work rate had slowed down towards the end of the round. This was probably the round Brooks eye gave out.

• Round Eight: Brook started off looking good by backing Spence up, unloading combos, and taking control of the ring. But as the round went on Spence took control. In the last-minute of the round, Spence was able to unload power shots onto Brooks head. It was almost like Brook did not see them coming or forgot to block them. I gave this round clearly to Spence.

There on out, Spence took control of the fight and the rest of the rounds with little reply from Brook. The Tenth Round Brook was knocked down within the first minute. But after watching the reply countless times, you could make a case that Brook was pushed down more than punched down causing him to lose his balance. It was not like Brook’s legs gave out. Regardless, Spence was knocking Brook around the ring from pillar to post. Brook did show the fighting spirit in round eleven by somehow digging up some energy with limited sight and a broken eye socket to temporarily halt Spence’s attack. But this was the last stance we would see from Brook, as his eye was too badly damaged. Brook decided enough was enough in middle of round eleven, ending his defence of his IBF title and handing victory over to Errol Spence.

I was surprised to see Brook throwing in the towel so easily. I thought Brook would have kept on going no matter what, fighting it out like a warrior. As we seen Anthony Joshua do in his fight against Wladimir Klitschko. But looking back on the decision some days later, Brook did the right thing. Losing your eye sight is not worth trying to look good.

Was Spence too much for Brook? Personally, I do not think so. I had Kell Brook easily ahead on points and taking control of the fight before his eye socket was broken in round 7. There was a lot of talk that Brook would not be able to make weight or take Spence’s body shots. But as we seen throughout the fight, Brook never looked troubled, stunned, or buzzed by Spence’s Body work all while making 147lbs.

Is the Spence hype justified? Again, I do not think so. If you look at this from an American point of view, the general consensus among the American community is Brook himself was a hype job with a poor resume. The only name on Brook’s record is Shawn Porter. Derrick James (Spence’s team member), said that in the Pre-Fight Press Conference Brook was at 21-0. His defeated opponents had 874 losses between them. So, my question is – how can you hype up Errol Spence when he has just beaten another so called “Hype Job” … Kell Brook? Spence still would not have a valid name on resume? Sorry but Keith Thurman is still No1 in the division and has the record to prove it. Just stating facts.

It is kind of ironic Brooks left eye was broken. Everyone, including myself was questioning whether or not the right eye would hold out after the GGG fight. Kell Brook must be the unluckiest boxer in the world. Having both eye sockets broken by a one in a million punch. Either that or Brook really needs to drink more milk. Personally, I believe that if Brooks eye was not broken he would still be IBF champion. I had Brook well ahead on points, he did not look gassed out or like he was getting worn down by Spence’s body shots. We can all state the “what if” but facts are facts. The better man won on the night. So, what is next for Kell Brook? I believe a rematch in the near future with Spence is possible after his 2nd titanium plate is healed. Brook has proven Spence is beatable is, though Brook might want a confidence booster tune up fight first. Maybe against Jessie Vargas or Amir “Kardashian” Khan. As for Spence, there is only one man he needs to focus on, No1 WBA, WBC Welterweight champion Keith Thurman.