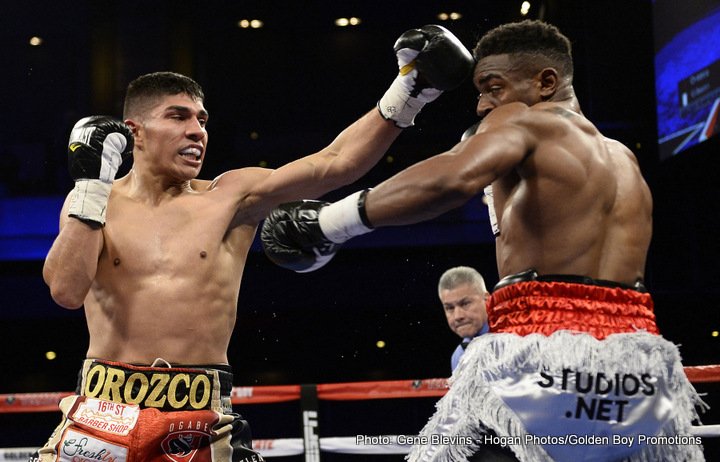 By Dan Ambrose: Unbeaten light welterweight contender Antonio Orozco (26-0, 17 KOs) kept his perfect record intact on Saturday night in stopping unbeaten KeAndre Gibson (16-1-1, 7 KOs) in the 4th round in a scheduled 10 round fight at the Cosmopolitan of Las Vegas, Las Vegas, Nevada. Orozco, 29, dropped Gibson with a right to the head in the 4th. The fight was then halted after Gibson failed to get back to his feet. The official time of the stoppage was at 1:31 of the round.

Orozco hurt Gibson with a left hook to the head late in round 3 that caused him to back up against the ropes. Orozco spent the remaining 20 seconds of the round in hitting the 27-year-old Gibson nearly at will with power shots while he gamely attempted to dodge the punches. After the round ended, it was pretty clear that Gibson was not going to be able to make it through the next round. Gibson’s corner should have perhaps pulled the plug on the fight and stopped it before the 4th because he was hurt, and he was not going to be able to survive the next round with the way that he was getting hit by Orozco.

In rounds 1 and 2, Orozco, WBO #4, WBA#8 IBF#11, WBC#10, was hitting Gibson with hard body shots and punches to the head without anything of substance coming back at him. Gibson was able to land jabs, but they weren’t keeping him in the fight. He was getting far too often with Orozco’s best shots, and it looked like a real massacre.

Gibson was landing his shots, but he lacked the power on them to give Orozco anything to think about when he was coming forward looking to land his power shots to the head and body. Orozco was moving up in down with his stance, as if it was making him hard to hit. He wasn’t hard to hit. Orozco never got out of the way of thing that Gibson threw at him.

The only reason Orozco didn’t get hit more in the fight was because was keeping Gibson busy with his high volume offense. Gibson couldn’t throw as many punches as he wanted to because he was constantly getting hit by Orozco. Now if Gibson had any power, he could have changed the equation by making Orozco afraid to throw punches at him, because he wouldn’t have been nearly as busy with his punches if he had to worry about getting hit back with something big.

All in all, it was an alright performance from Orozco. He looked good when he was throwing to the body. However, his punching power was not what it should be for him to have a chance at beating the stronger fighters in the division. In my estimation, Orozco doesn’t hit hard enough for him to beat the best fighters at 140 like Terence Crawford, Adrien Broner, Ricky Burns and Julius Indongo.

Orozco needs to work on his punching power in a big way, because he’s going to come unstuck when he eventually faces someone good. Orozco looks like a good career contender type of fighter, but he doesn’t have the pop in his punches for him to get past the better fighters in the 140lb division. The good news is that Orozco is young enough to where he can wait out guys like Terence Crawford until he moves up in weight.

Orozco can then go after Crawford’s vacated titles. That’s about the only way I see Orozco winning a world title at 140. If he gets in the ring with the champions right now, I see it ending badly for him. But if you put Orozco in with guys like KeAndre Gibson, he can look good against those types of fighters. Gibson showed that he didn’t have the power in his punches o give Orozco any problems. It was the idea fight for Orozco. In other words, it was a showcase fight to make Orozco look better than he actually is.

Other boxing results on the card, former lightweight world title challenger Mercito Gesta (30-1-2, 16 KOs) had to get up off the deck in round 3 to defeat Gilberto Gonzalez (27-3, 22 KOs) by a 10 round unanimous decision. The final judges’ scores were 99-91, 98-92, 96-93. Gesta, 29, out-landed Gonzalez by a significant margin in each round, but he lacked the punching power to put him down. Gesta was landing a lot of weaker shots that were connecting but have zero effect on the 30-year-old Gonzalez.

The win for Gesta was his second straight since his 10 round draw against Carlos Molina in 2015. Gesta was beaten by former IBF World lightweight champion Miguel Vazquez by a lopsided 12 round unanimous decision in December 2012. Gesta was not ready at the time to fight for a world. He looked like a deer caught in the headlights in that fight. He did not look mentally ready to fight someone of that talent level. After seeing Gesta labor to a dull 12 round deision tonight, I still don’t see him being talented enough to challenge any of the top lightweight champions. If this had been Mikey Garcia or Jorge Linares that Gesta was facing tonight, I think he would have stomped by them.