Hearn: If Haye loses to Bellew, no Joshua fight 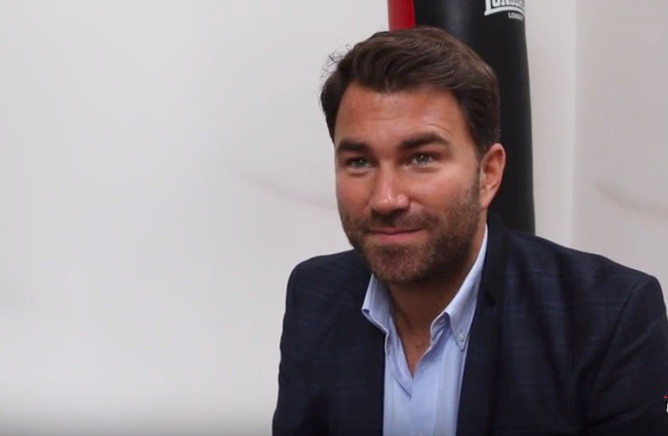 By Scott Gilfoid: Matchroom Sport promoter Eddie Hearn says David Haye (28-2, 26 KOs) can forget about fighting IBF heavyweight champion Anthony Joshua if he loses his fight this Saturday night against Tony Bellew (28-2-1, 18 KOs) on Sky Box Office pay-per-view. Hearn promotes Bellew, and he wants him to win the fight, as does Joshua. Haye vs. Joshua would be a huge money fight, but Hearn and Joshua seem to be less than thrilled at the idea of making that fight for some reason.

Unfortunately for Joshua and Hearn, Bellew is the underdog in the fight against Haye, and he’ll be lucky if he sees the final bell in round 12. If Joshua and Hearn are going to root for someone to beat Haye, then they’re probably going to need to get on the Deontay Wilder bandwagon, because I think he might be the only one that can do a job on Haye right night. I don’t think Luis Ortiz is young enough to do the job against Haye, and the other heavyweights in the division are too flawed.

“We’re looking at unification fights, the David Haye fight with Joshua is a big fight, but on Sunday that fight might not be existing ever again,” said Hearn to skysports.com. “I don’t think he’s the biggest fan of David Haye,” Hearn said about Joshua “I have seen a few interviews lately with AJ, where he’s not bit, but sort of said I don’t like that guy.”

What difference does it make whether Joshua likes Haye or not. That’s not exactly a good reason for him not to fight him, is it? If Joshua doesn’t like Haye, then he should be more interested in fighting him so that he can show him how much he likes him rather than rooting for one of your stable-mates to beat him.

Some boxing fans think Joshua and Hearn are afraid of Haye, because he has the punching power and the hand speed to derail the gravy train. I can understand what those fans are talking about. If Haye whips Joshua, then it might be hard for Hearn to continue to sell his fights on Sky Box Office PPV. How do you justify asking the British fans to continue to pay to see Joshua fight on PPV if/when he gets knocked out by Haye, especially if it’s a fast knockout in 1 or 2 rounds.

Does Hearn just ignore the knockout loss for Joshua and keep pushing to sell his fights on PPV like nothing ever happened? It would be very interesting to see if Joshua sees a drop off of PPV buys for his fights if he loses to Haye. Of course, if Joshua and Hearn never make the fight against Haye, then they don’t need to worry about ever losing to him.

It’s going to be hard for them not to take the fight with Haye if he keeps winning. You can dismiss Haye as an opponent for Joshua if he loses to Bellew, but if he blasts him out in 1 round like some boxing believe will happen on Saturday, then what do you do? How long does Joshua and Hearn steer around Haye? I think the fans are going to start talking sooner or later and point out that Joshua should be fighting Haye rather than the likes of Dominic Breazeale, Eric Molina and Wladimir Klitschko.

“As far as AJ is concerned, and us of course, we only want one thing and that’s a Tony Bellew win,” said Hearn.

Why would Joshua want Bellew to win against Haye? That’s what I don’t understand. Hearn has talked about wanting to match Bellew against Joshua, but that’s such a dreadful mismatch. I guess the British boxing public would still purchase the fight, but I don’t think it would be a good fight at all.

If Bellew beats Haye, and then defeats someone else like Luis Ortiz to show that he’s a major player in the heavyweight division, then I think it would be a great idea for him to face Joshua. The reality of the situation is that Bellew will likely be destroyed by Haye on Saturday. I don’t think for a second that Hearn will ever risk Bellew’s hide by putting him in with Luis Ortiz or any other good heavyweight. If Bellew beats Haye, I see Hearn matching him up immediately with Joshua if he gets past Klitschko on April 29. I don’t see Hearn taking any chances with Bellew by having him fight a good heavyweight.

Never the less, I do not see Bellew beating Haye or even being competitive with him in real sense of the word. I think Bellew will run around the ring against Haye, jab and try not to get hit. I wouldn’t be surprised if Bellew turns it into a dirty fight with him nailing Haye low, and then teeing off on him quickly while he’s bent over. We saw that in Bellew’s last fight against BJ Flores. The referee didn’t do anything to address the low blow. It was very strange to watch. Bellew fouls Flores with a low blow, and then he tees off on him while he’s hurt from the shot.

I think if Hearn and Joshua are going to permanently avoid David Haye, they’re going to need to look for another reason to do so. I don’t see Bellew being the one that removes Haye from Joshua’s hair. It’s going to take another reason for Joshua and Hearn to avoid ever fighting Haye. It’s too bad that Joshua doesn’t just take the fight with Haye. After all, Hearn has built him up as the best heavyweight in the division. If you’re the so-called best, then you should be able to fight Haye, right?


« Haye: Bellew is in for a world of hurt

Golovkin says Chavez Jr. will be weak for Canelo fight »