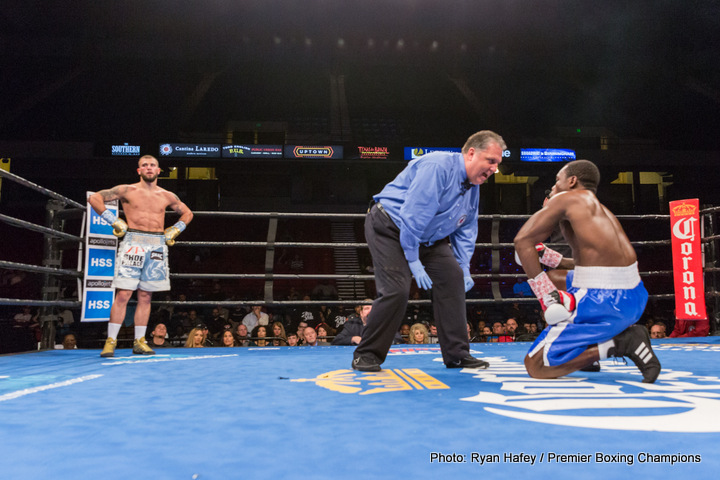 By Jim Dower: Unbeaten #13 IBF fringe super middleweight contender Caleb Plant (15-0, 10 KOs) kept his perfect record intact in defeating Thomas Awimbono (25-7-1, 21 KO) by a 10 round unanimous decision on Saturday night on the undercard of the Deontay Wilder vs. Gerald Washington card at the Legacy Arena in Birmingham, Alabama.

The 24-year-old Plant’s fight against Awimbono didn’t make it on the televised portion of the Wiider-Washington card on Premier Boxing Champions on Fox TV. The card already had two very good undercard fights involving top fighters.

The final judges’ scores for the Plant vs. Awimbono fight were 100-89, 100-89 and 99-90.
Plant controlled the fight throughout using his jab and hard right hands to get the better of Awimbono in the exchanges. Plant took the fight to the 36-year-old Awimbono from the 1st round, hitting him hard with body shots and hooks to the head.

For Awimbono, this was his third straight defeat that he’s suffered since last year. Awimbono was beaten by Derrick Webster and Mike Gavronski in his last two fights in losing 10 round decisions. One thing you can say about Awimbono is he can take a good punch. He was hit a lot in tonight’s fight, and he was able to get out of the fight on his feet.

Plant was getting hit by Awimbono early on in the fight, but he took the shots well, and didn’t stop throwing his own big shots. Awimbono was down in the 1st round, but got up and was no worse for the wear. Plant need to go after Awimbono if he wanted to score a knockout. He played it too safe by not pushing for the knockout after he had him down.

Plant was hit with a number of good shots from Awimbono in rounds 3 through 7. Plant continued to get the better of the action, but he was definitely in a fight. It wasn’t a pushover he was in with compared to some of the guys he’d been fighting.

It was a good performance by Plant. He needs to upgrade the level of his opposition so that he can keep developing.

In other boxing action on the card, undefeated super featherweight Tugstsogt Nyambayar (8-0, 8 KO) defeated Jhon Gemino (15-8-1, 7 KO) by 10th round knockout. The official time of the stoppage was at 1:05 of the 10th round.

The 24-year-old Nyambayar is a 2012 Olympic silver medalist from Mongolia with a bright future ahead of him. He was beaten by Cuban Robeisy Ramirez by a close 17-14 score in the gold medal match in the 2012 Olympics.


« Pacquiao says Khan fight is a done deal for April 23

Khan: I know I can beat Pacquiao »