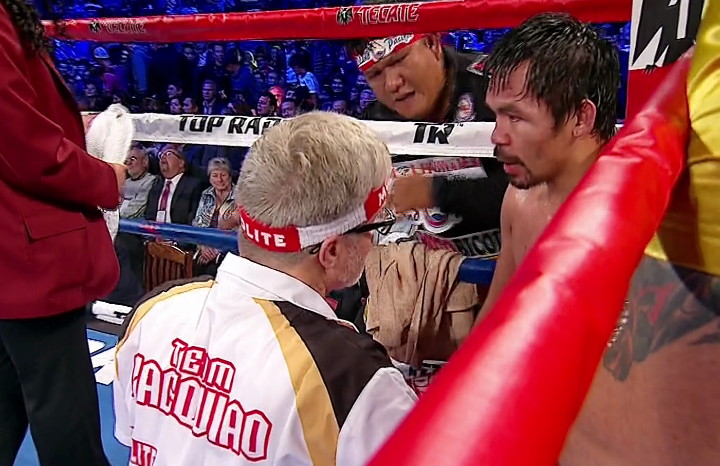 By Chris Williams: After ignoring Terence Crawford for well over a year despite their Top Rank promoter Bob Arum badly wanting the fight, 38-year-old Manny Pacquiao is finally willing to face the Omaha, Nebraska native, but for a high a price of $20 million guaranteed. That’s the amount that Pacquiao reportedly wants, and he wants the fight to take place in April.

The $20 million would be in addition to the pay-per-view upside that Pacquiao (59-6-2, 38 KOs) could be getting for the fight. Now the question is will Arum be willing to give Pacquiao that kind of cash for the fight with Crawford? Pacquiao isn’t a draw like he used to be on PPV. You can blame a lot of that with the very, very stale match-making from Top Rank for Pacquiao in his last two fights.

If Pacquiao’s recent fights against Tim Bradley and Jessie Vargas are any indication, Top Rank might be taking a huge gamble if they give Pacquiao a huge $20 million guarantee. Crawford is popular in one city in the U.S, and that’s Omaha. Crawford is well known to the hardcore boxing fans, but not the casual fans. He’s another Floyd Mayweather Jr., not in terms of popularity or his fighting style.

You can argue that Crawford is even less well known than Tim Bradley. Pacquiao’s last fight against Jessie Vargas brought in just 300,000 PPV buys on HBO on November 5. Pacquiao’s third fight against Tim Bradley hauled in only 400,000 PPV buys in April of 2016. What we’re seeing from Pacquiao is deteriorating PPV numbers. A fight against Crawford may not be any different. If Arum can absorb a potential loss of money from a fight between Pacquiao and Crawford, then it might be a doable fight.

Pacquiao’s adviser Michael Koncz said this to the Manila Bulletin about a fight against Crawford:

“If it’s Crawford that Top Rank wants for Manny Pacquiao, then we’ll fight Crawford but we want a guarantee of $20-million,” said Koncz after talking to Pacquiao on Sunday. “The (Philippine) Senate will take a break starting mid-March and will resume sessions on May 2.”

Arum has been talking of Pacquiao returning to the ring in June of this year. That’s not going to work with Pacquiao’s senate schedule, however. If Arum wants to schedule a fight between Pacquiao and the 29-year-old Crawford (30-0, 21 KOs), then he’s going to need to put the fight together in a hurry for April.

That’s not much time for Arum to try and put together what he feels will be a big fight. As I was saying, it might not be a big fight. There aren’t enough hardcore boxing fans to guarantee that Pacquiao vs. Crawford is a successful one, because the casual fans are the ones that signal whether a fight is going to be a success or failure.

In Pacquiao’s successful fights in the past on HBO PPV, he was fighting either guys with huge fan bases or fighters that were well known from having been televised for years on U.S television. We’re talking about guys like Mayweather, Miguel Cotto, Shane Mosley, Antonio Margarito, Juan Manuel Marquez and Oscar De La Hoya. That’s only seven fighters. The guys that Pacquiao didn’t bring in huge PPV buys fighting were guys that weren’t huge stars or didn’t have large fan bases backing them. We’re talking about Joshua Clottey, Tim Bradley, Chris Algieri, Jessie Vargas, and Brandon Rios.

If Pacquiao is going to get a large guarantee of $20 million for a fight against Crawford, then you have to assume that Crawford would want at least 75/25 cut of the revenue for the fight. $4 million would plus a percentage of the PPV upside for the fight is likely what Crawford would be looking to get. If the Pacquiao-Crawford fight fails to bring in a lot of PPV buys, then Top Rank could wind up in the red with this fight. I’m sure Arum has a good idea what the fight can bring in, but at this point it’s hard to tell. The PPV market is down after the disappointment of the Mayweather vs. Pacquiao fight in 2015.

It’s possible that the boxing fans won’t want to pay to see Pacquiao fight Crawford on HBO PPV, especially if Top Rank markets the fight as a replay of Mayweather vs. Pacquiao. I think the fans will stay away in droves. If they hike the PPV prices to $100 per household like the Mayweather-Pacquiao fight last year, it could further hurt PPV sales. I don’t think the fans are going to want to pay that kind of money for another fight that could be just as disappointing.

If the Pacquiao-Crawford fight does take place, you have to hope that Crawford fights in a more exciting style than he showed in his last two fights against John Molina Jr. and Viktor Postol. Those were very, very boring fights for me to watch due to all the movement that Crawford was doing. Crawford moved for seven rounds against a slow as molasses Molina Jr. until stopping him in the 8th round with some body shots. In the Crawford-Postol fight, Crawford chose to get on his bike and move in the last four rounds of the fight when he had Postol there for the taking.

Crawford ran around the ring in round 12, sticking his tongue out at the 5’11” Postol rather than trying to finish him off. This was on HBO PPV. It looked like Crawford was trying to stall out the fight. It was the wrong way to fight for a guy that is trying to become a PPV star. When you see fighters like middleweight champion Gennady “GGG” Golovkin breaking his back trying to make it entertaining for the boxing fans by pressuring his opponents to try and score knockouts, then you see Crawford running around the ring stalling out a fight, it just shows you which of the two is trying to give the fans their money’s worth. If Crawford chooses to run and befuddle the 38-year-old Pacquiao rather than fight him, the two of them might get booed out of the arena. I hope for Pacquiao and Top Rank’s sake that Crawford is willing to try and make it exciting for the entire fight rather than moving, holding and just trying to box Pacquiao.

You can understand why this might not be a good fight for Pacquiao. He’s nearing 40-years-old, and he would be forced to potentially chase after Crawford for 12 rounds to try and get the ‘W’ against him. It would be difficult.

While Pacquiao’s trainer Freddie Roach likes to compare Crawford to a younger, stronger Floyd Mayweather Jr, they’re completely different fighters in my estimation. Mayweather used to like to stay in the pocket and make his opponents miss with his defensive skills and fast reflexes. Mayweather had MUCH faster hand speed than Crawford. There’s no comparison in the speed department. Crawford is a lot slower than Mayweather, even the 39-year-old version we saw against Andre Berto.

Crawford DOES NOT stay in the pocket for any length of time when facing good opposition. He moves around the ring, changes fighting stances from orthodox to southpaw, and he likes to tie up his opponents frequently. It’s not nearly as exciting as Mayweather in my opinion. It’s a watered down version of Mayweather once you take away the quick reflexes, blazing hand speed and his ability to fight in the pocket.

Fighter of the year: Lomachenko or Frampton? »