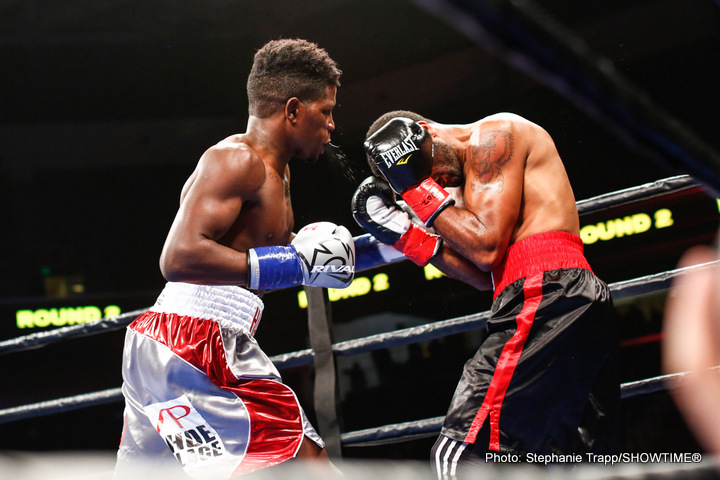 By Jeff Aranow: Undefeated #8 WBA junior middleweight contender Erickson “The Hammer” Lubin (17-0, 11 KOs) will be fighting #8 WBC Jorge Cota (25-1, 22 KOs) in the co-feature bout on March 4 on the Danny Garcia vs. Keith Thurman card at the Barclays Center in Brooklyn, New York. Showtime Championship Boxing will likely be televising the card. However, there’s a chance that CBS could televise the fight card, according to RingTV.

Lubin, 21, is still a prospect at this point in his career despite him being ranked by the WBA at No.8. He’s got a lot of work to do before he’s ready to mix it up with champions like the Charlo brothers and Erislandy Lara.

The Lubin vs. Cota fight will be televised as part of the March 4 Garcia-Thurman card. Unfortunately, it’s not a great fight between Lubin and Cotto in terms of it being a can’t miss match-up. There’s not much to get excited about this fight. Lubin isn’t well-known by the casual boxing fans, and the 29-year-old Cota hasn’t beaten anyone of note during his career. His biggest win thus far was against Yudel Johnson in August 2015 in winning a 12 round decision.

Cota didn’t fight at all in 2016. So when he does return to the ring to fight Lubin on March 4, he’ll have been out of the ring for a year and a half. In Cota’s toughest fight of his career in 2012, he was knocked out in the 7th round by Marco Antonio Rubio. Cota has won all nine of his fights since that setback, albeit against less than world level opposition.

Cota can punch, but he doesn’t appear to have enough talent to get him to the next level. The ring rust Cota will have in fighting Lubin off of a 1 ½ year layoff isn’t going to help him any. Cota has it bad enough fighting the highly thought of Lubin, but taking the fight off of a super long layoff clearly shows that he’s been picked as the B-side opponent for Lubin to beat and look good against.

The winner of the Lubin-Cota fight will face the winner of Vanes Martirosyan’s soon to be ordered fight by the World Boxing Council to pick an eventual mandatory challenger to WBC junior middleweight champion Jermell Charlo. There are a lot of hoops the contenders need to jump through just to get a title shot against Charlo, who is seen as the weaker of the Chalo brothers by a lot of boxing fans. It’s a good thing for Lubin, because I don’t think he’s near ready enough for him to compete with Jermall Charlo, the IBF 154lb champion.

#2 WBC Srisaket Sor Rungvisai (41-4-1, 38 KOs) is predicting a knockout win over unbeaten WBC super flyweight champion Roman “Chocolatito” Gonzalez (46-0, 38 KOs) in their fight in two months from now on March 18 on HBO pay-per-view at Madison Square Garden in New York. The Gonzalez-Rungvisai fight was officially added to the Gennady “GGG” Golovkin vs. Daniel Jacobs card on Tuesday to help beef up the fight card.

It’s a great addition to the card. It’s debatable how many extra PPV buys the Gonzalez vs. Rungvisai will bring in though. It’s a great way for K2 Promotions to increase the popularity of Gonzalez to make him a bigger name in the UK. The idea is to make Gonzalez popular enough for him to headline his own cards.

That would be impressive, because the super flyweight division historically is not one that attracts a great deal of interest from the casual U.S boxing fans. The fact that Gonzalez has been able to get as popular as is he is in such a short period of time since being teamed up with Golovkin on his undercards says a lot about the talent level of Gonzalez.

“I was able to hurt Carlos Cuadras in the way that Gonzalez could not. Cuadras did not hurt me when we fought but he hurt Gonzalez throughout their fight last year,” said Rungvisa to Fight News. “I am confident I can beat Roman Gonzalez. And the fight will not go twelve rounds .”