Canelo explains why he was willing to go up in weight 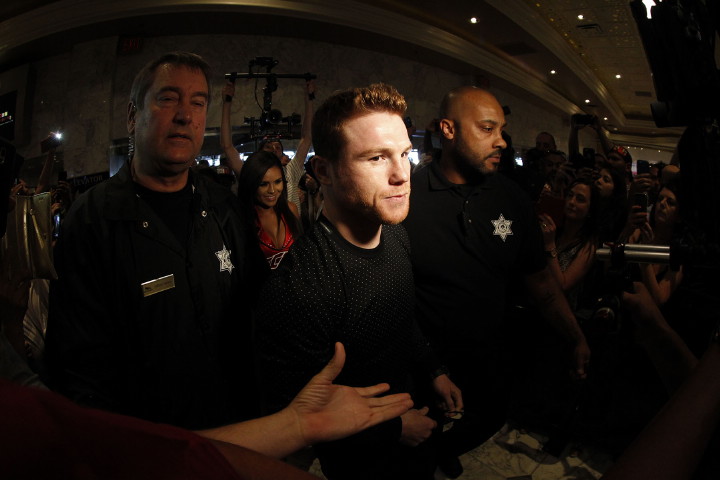 By Dan Ambrose: Saul Canelo Alvarez surprised boxing fans this past week when he decided to move up in weight 9 ½ pounds to take on Julio Cesar Chavez Jr. at a catchweight of 164 ½ pounds on May 6 in their big Mexican showdown HBO pay-per-view. Before agreeing to fight Chavez, 30, Canelo had been unwilling to move up to the full weight of 160lbs to fight middleweight champion Gennady “GGG” Golovkin for his titles.

Canelo’s promoters at Golden Boy maintained that he hadn’t grown into the middleweight class, and that he needed time to keep filling out, even though there were many rumors about Canelo (48-1-1, 34 KOs) rehydrating into the 180s for his fights. But with Canelo agreeing to go well beyond the 160lb division to fight Chavez Jr.(50-2-1, 32 KOs) at a catchweight of 164.5lbs, it looks strange to boxing fans how he had no problems with moving up in weight for this match-up.

So why did Canelo suddenly change his mind about needing to take things slowly in moving up in weight. It is because Chavez Jr. is seen as a slow, past his prime fighter that is no longer considered one of the best, or is because Canelo finally decided he had filled out enough to fight at a higher weight than 155?

“He talks too much about me. He’s talked bad about me and criticized me so many times,” said Canelo about Chavez Jr.”I will prove to him in the ring who’s the better man. I think what convinced me to make the move was the fight itself, which is one of the biggest, if not the biggest, in the history of Mexico. That’s what intrigued me. The significance of the fight is what convinced me to make the move.”

There are other fighters that have criticized Canelo, and he’s not chosen to fight them. Is the real reason that Canelo has finally decided to move up in weight to fight Chavez Jr. because he wants to shut him up or is this just seen as another winnable fight for him against a faded fighter, whose career has never been the same since his loss to Sergio Martinez in 2012? Canelo says the reason why he is willing to come up in weight so much to fight Chavez Jr. at super middleweight is because he’s trash talked him so badly for a long time. Golovkin has talked about Canelo too, and he’s not come up in weight to fight him. Is that really the reason?

The weight for the Canelo-Chavez Jr. fight is a real big deal, because it’s considerably more than what he’s fought at in the past. But also the catchweight hurts Chavez Jr. because it’s 3 ½ pounds below the 168lb limit, which he really doesn’t seem to be able to make on a consistent enough basis for him to be thought of as a true super middleweight.

That’s why the 164 ½ pound catchweight is seen by many boxing fans as the insurance policy for Canelo and Golden Boy to get a victory over Chavez Jr. The guy is now more of a cruiserweight than a light heavyweight, and he’s definitely not a super middleweight. Chavez Jr. has plenty of time for him to get down to the 164 ½ pound weight limit for the fight. There’s 4 months to go before the fight on May 6.

Chavez Jr. should be able to get down to the weight limit for the fight by the time the two of them step on the scales to be weighed on May 5. Of course, Chavez Jr. is going to need to still treat his training camp as a weight reduction camp, and that’s never a good idea. The main problem that Chavez Jr. has is he’s filled a lot over the last five years, and he’s probably a true 190+ pound fighter at this point. I don’t care that Chavez Jr. has 4 months to take weight. If your true weight is 190+ pounds, then you’re going to have major problems getting down to 164.

You’re still talking about 30 pounds of weight. With Canelo, it’s not as bad. He might be coming down from the mid-180s, so he would need to lose 20 pounds. But he seems to be very good at cutting weight. Canelo has it down to the science with his expertise at making weight. The only time Canelo didn’t make weight was his catchweight fight against Matthew Hatton in 2011, when the two them fought for the vacant WBC junior middleweight title. Canelo was able to fight a welterweight in Matthew Hatton for that vacant belt rather than one of the top 15 contenders in the World Boxing Council’s 154lb rankings for some reason.

Canelo is expected to go down to 160 for his next fight against Gennady Golovkin to challenge him for his titles next September. That fight will be contingent upon the fighters’ camps being able to negotiate the purse split. It’s good that the weight at least will finally be a non-issue for Golovkin vs. Canelo, but it’s difficult to imagine Golden Boy Promotions being wiling to give Golovkin a decent purse split after they bring in a lot of buys for the Canelo-Chavez Jr. fight.

If the shoe was on the other foot and Golovkin was able to get the fight against Chavez Jr. in his next fight on March 18 on HBO PPV, the fight would likely bring in big PPV numbers as well. That would help Golovkin if he were able to make that fight happen, but he just didn’t get lucky like Canelo in getting the Chavez Jr. Ultimately, I think the Canelo vs. Chavez Jr. fight will work against the Canelo-Golovkin fight getting made. If the Canelo vs. Chavez Jr. fight brings in a ton of PPV buys compared to the Golovkin vs. Daniel Jacobs fight on March 18, then Golden Boy Promotions CEO Oscar De La Hoya can tell Golovkin’s management, ‘See, I told you that Canelo is the bigger star. Here’s your offer. Take it or leave it.’ Golovkin’s promoters at K2 Promotions will be negotiating from a position of weakness more than ever rather than a position of strength. Unless Golovkin is willing to take small money for a chance to beat Canelo and possibly get a rematch against him, I don’t think the fight will be worth it for him. Canelo doesn’t seem to rematch fighters that do well against him. Erislandy Lara is still waiting for a rematch, and he arguably beat Canelo in 2014. If Golovkin takes the small money for a fight against Canelo, I don’t there will ever be a rematch if Golovkin destroys Canelo. Why would there be one? Golden Boy isn’t going to let Golovkin stomp their flagship money maker twice. This is a one time shot for Golovkin. The only way he gets a rematch is if he loses in my view.

Jacobs will use size advantage against Golovkin says Rozier »