Badou Jack: DeGale is too small to go to 175 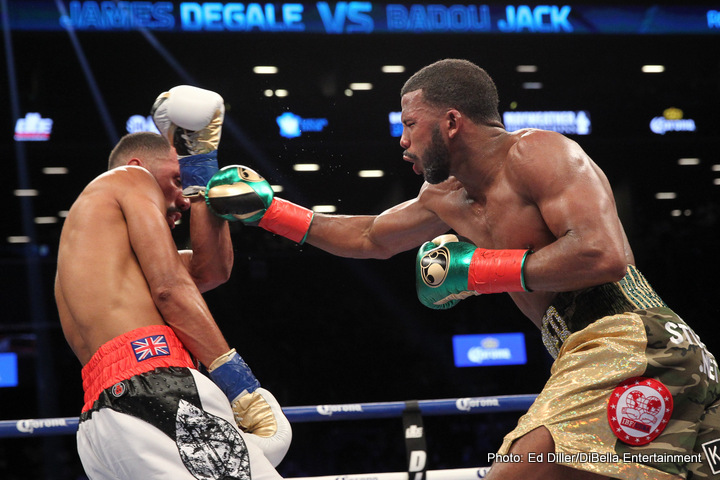 By Scott Gilfoid: As far as Badou Jack is concerned, he whipped IBF super middleweight champion James DeGale last Saturday night, and there’s no point in them fighting a rematch. The judged that were assigned to the DeGale-Jack fight scored it a 12 round draw last Saturday night at the Barclays Center in Brooklyn, New York.

Jack, 33, finished the fight looking like the winner with him dropping DeGale in round 12, knocking out some of his front teeth, and busting his eardrum. It was a methodical beating that Jack inflicted on the 30-year-old DeGale.

DeGale wants a rematch with Jack in the worst way, as he wants to be able to prove that he’s the better fighter of the two. Jack and his promoter Floyd Mayweather Jr. have other ideas. Jack is moving up to light heavyweight to chase bigger fights and bigger paydays against the likes of Adonis Stevenson. The money is now in the 175lb division rather than at 168. DeGale can try and get a rematch with Jack if he wants to, but it’s quite clear from listening to Mayweather that he’s not going to change his mind about Jack moving up to 175. That’s what they plan on doing.

Jack said this via ESPN.com about a rematch against DeGale:

“He’s not strong enough to beat me at super middleweight, so how’s he going to go to light heavyweight,” Jack said about DeGale. “He’s too small for that, but I already proved I won the fight. Why would there be a rematch? I want to fight the best. I don’t care [who it is].”

That makes sense what Jack says. I totally agree with him about DeGale being too weak and small to move up to 175 to compete with him in that weight class and I don’t think he and his promoter Eddie Hearn are even going to consider that move. DeGale has two payday fights against fellow Brits George Groves and Callum Smith, and he’s not going to move away from the division were those fights are going to be there for him.

Besides that, it might be too hard on DeGale’s body to take a second fight against Jack, even if the fight were to take place at 168. We saw the nasty aftereffects of Jack’s heavy hands on the face, teeth and eardrum of DeGale last Saturday night in the 168lb division. If a rematch between these two fighters takes place at 175, it might be a real bad day at the office for DeGale. He would be better off remaining at super middleweight to bide his time for an eventual rematch against Groves and a fight against Callum Smith. The Smith fight for DeGale only makes sense if Smith can get past Anthony Dirrell when the two of them face each other for the vacant WBC super middleweight title that Jack is about to give up when he moves up to 175.

“I never want to be remembered as a cherry-picker. Give me the best guys,” said Jack. “If I win, I win. If I lose, I lose. I want to be tested. I want the challenges. I want the big money fights. I don’t care who’s in front of me. Anyone. … Yeah, I’m ready to fight him [Stevenson].”

Fighting Adonis Stevenson is a win-win situation for Jack. The cash is going to be really sweet for Jack. He can good payday against the 38-year-old Stevenson that would likely dwarf the money he would make in a rematch against DeGale. Promoter Eddie Hearn says he wants to turn DeGale into a pay-per-view attraction in the UK to make him a big name in British boxing, but that’s not happened yet.

If DeGale was a big name right now, then it would make all the sense in the world for Jack to fight him again, but he’s not. DeGale is still a road warrior. He didn’t help his situation in fighting to a 12 round draw against Jack. I know that Carl Froch still became a big name when he had to go on the road in the Super Six tournament many years ago and lost to Andre Ward in the finals of the tournament. DeGale isn’t going to get a popularity bounce in the UK from his 12 round draw with Jack, because he appeared to lose that fight in the eyes of a lot of boxing fans, and he finished in a weak manner in getting dropped in the 12th, and having a couple of teeth knocked out.

I’m still trying to figure out why DeGale’s teeth got knocked out. He must have not been hitting down on the mouthpiece while trying to get some air.

Jack wouldn’t be a seen as a cherry-picker if he remained at 168. He would either be defending his WBC title against his mandatory challenger Callum Smith or facing DeGale in a rematch next. The boxing world wouldn’t see Jack as scraping the bottom of the barrel if he fought deGale a second time or fought Smith. Obviously, neither of those fights compare to the risk that Jack would be taking in facing Stevenson. If you threw Callum Smith or DeGale inside the ring with Stevenson, I think it would end badly for them. Stevenson is too fast, too strong and too experienced for the likes of DeGale and Smith.

“Adonis Stevenson,” Mayweather said. “We looking forward to a Badou Jack and an Adonis Stevenson fightin’. We gonna make that fight happen. We’re not worried about that because at Mayweather Promotions we can make anything happen.”

Canelo explains why he was willing to go up in weight »