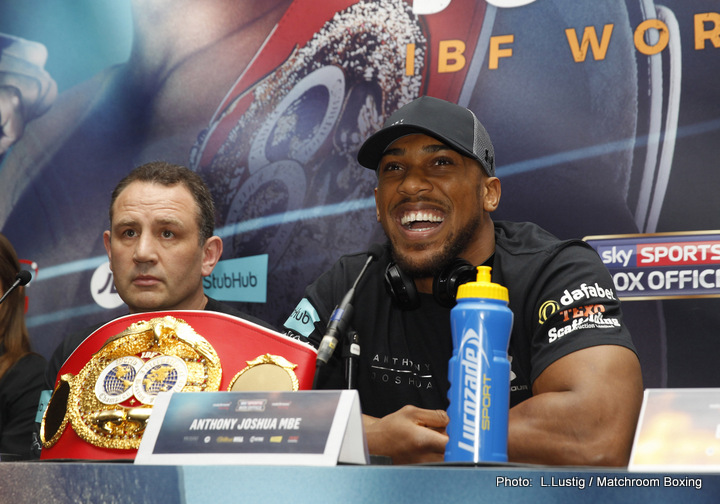 By Scott Gilfoid: Anthony Joshua thinks the British Boxing Board of Contro (BBBofC)l did the right thing in allowing British heavyweight Dereck Chisora to go ahead and fight Dillian Whyte (19-1, 15 KOs) this Saturday night on Sky Box Office PPV at the Manchester Arena in Manchester, England.

The BBBofC had a meeting on Thursday to decide the face of Chisora, who had created a big ruckus during Wednesday’s press conference after he picked up a large table and hurled it in the direction of Whyte.

No one was injured; this violent acting out by the 32-year-old Chisora had to be addressed, especially after some of his past behaviors. The BBBofC let Chisora off lightly in fining him £25,000 and giving him a 2-year suspended 2-year ban.

“At the end of the day, this is fighting. Throughout the history of boxing, you have these types of incidents,” said Joshua to skysports.com. “It doesn’t happen at every press conference, but one out of 100 it may happen. This is not tennis, this is a gladiatorial sport. It’s fight or flight, so you’re going to get it. You saw that with Tony Bellew and David Haye – guys are going to attack each other. It happens sometimes.”

I bet Joshua is relieved that he’s not losing the Whyte vs. Chisora fight for his co-feature bout, because that’s the only decent fight on the undercard on Saturday night that appears to be attracting interest from the boxing fans. Let’s be honest, the boxing fans aren’t talking about the undercard fights involving Callum Smith vs. Luke Blackledge, Luis Conception vs. Khalid Yafai, Luis Ortiz vs. Dave Allen, Marcus Morrison vs. Harry Matthews, Conor Benn vs. Steven Backhouse, Katie Taylor vs. Viviane Obenauf, Hosea Burton and Scott Quigg vs. Jose Cayetano.

With that many mismatches involving fights that have failed to interest the paying fans, it’s no wonder that Joshua is so happy that the Whyte vs. Chisora fight have been allowed to take place. It would have been dreadful news if the fight hadn’t taken place.

It meant that the fans would have had to make the choice of whether or not to purchase the December 10 card based on whether they wanted to see Joshua fight Molina. I’m guessing that not a lot of fans are too excited about that fight. It could be something about Molina being knocked out by Deontay Wilder last year or the fact that Molina was knocked out in one round by Chris Arreola in the past. There’s also the fact that Molina looked terrible in his recent fight against Tomas Adamek.


« Roach: Crawford could be next for Pacquiao

Joshua vs Molina: Joshua says he might toy with Molina »