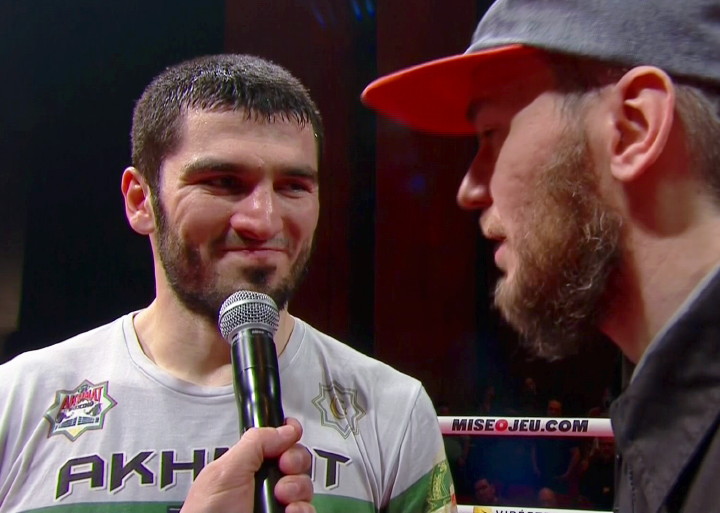 By Allan Fox: Artur Beterbiev (11-0, 11 KOs) is poised to take over the light heavyweight division in 2017 when he faces the winner of the Andre Ward vs. Sergey Kovalev fight. Beterbiev destroyed contender Isidro Ranoni Prieto (26-2-3, 22 KOs) in 1 round last Friday night at the Lac Leamy Casino in Gatineau, Quebec.

The victory showed how great of a puncher Beterbiev is on the inside, and he’s not someone that can be mauled like we saw with Kovalev in his fight against Ward. The inside smothering, mauling and wrestling tactics of Ward would likely be completely effective with Beterbiev.

He’s got this uncanny ability to throw short power shots from close range. You can’t smother Beterbiev’s offense or wrestle because his punches are too powerful in close, and he’s impossible to wrestle due to his upper body strength.

Kovalev might have a better chance against Beterbiev than Ward, because he at least is capable of fighting on the outside. Ward is strictly an inside fighter at this late stage of his career. He once had good boxing skills to fight on the outside, but he’s aged and his hand speed has slowed down.

Ward is now an inside mauler/wrestler type of fighter, and that’s not going to work against Beterbiev. He’s got those short power punches that he likes to throw to score knockouts. We saw those short shots last night while Beterbiev was in the process of mowing down Prieto in one round. We also saw Beterbiev use his short power punches to smash former world champion Tavoris Cloud in 2 rounds in 2014, Jeff Page Jr., Gabriel Campillo, Alexander Johnson and Ezequiel Osvaldo Maderna. Beterbiev just looks very, very dangerous for anyone in the light heavyweight division, but especially for Ward. If you don’t have an outside game, then you’re in trouble against Beterbiev, because he’s way too good on the inside to be beaten there.

Ward will try and use his boxing skills to win a decision over him, but it’ll definitely be an inside fight against Beterbiev, because Ward can no longer fight on the outside at this advanced stage in his career. I don’t think Ward figured on having to fight someone dangerous like Beterbiev when he got the idea of moving up to light heavyweight to fight Kovalev for his titles.

Ward likely scouted out Kovalev’s fighting style before he moved up in weight and figured that he could wrestle/smother him for 12 rounds. The problem with Ward winning all of Kovalev’s three light heavyweight titles is that Ward is now in the position where he’s going to need to defend those titles against Beterbiev if he doesn’t lose to Kovalev first in their rematch or if he doesn’t choose to vacate his titles rather than defend them.

Hopefully, Ward doesn’t choose to retire from boxing before or after the Kovalev rematch. It would be great to see Beterbiev fight Ward to see how well he handles his inside fighting. That would be a real treat for the boxing fans to see Beterbiev on the inside trading shots with Ward, and not holding. Beterbiev doesn’t hold on the inside; he fights. That’s why you have to like Beterbiev. He’s a breath of fresh out for the sport. The two-time Russian Olympic boxer has been a pro since 2013, and has won his first 11 fights by knockout. That’s pretty impressive, especially when you see the guys that Beterbiev has knocked out. He’s beaten some real solid fighters among the 11 knockouts he has on his record.

Beterbiev is expected to be back inside the ring inside the ring in an eliminator fight between January and March against a still to be determined opponent. Beterbiev will set himself up for a title shot in that fight, and then all he’ll need to do is wait for the fight to happen.

The winner of the Ward-Kovalev II fight should take place within the first six months of 2017. They can’t sit on the titles for the remainder of the year without fighting again. By late 2017, Beterbiev should be fighting for a title. All total, Beterbiev is expected to fight three times in 2017, which is great news for the boxing fans. Beterbiev is winning over a lot of fans in a hurry despite having missed a year recently with a shoulder injury.

Beterbiev vs. Sullivan Barrera, Joe Smith Jr, Erik Skoglund, Sean Monaghan, Dominic Boesel or Oleksandr Gvozdyk would be great fights for him. Gozdyk would especially be a good opponent for an eliminator bout. However, Gvozdyk is promoted by Top Rank, and they might not want to risk putting him in with someone that can punch like Beterbiev. We saw how Gvozdyk was knocked down by fringe level fighter Tommy Karpency recently. If you put Gvozdyk in with a real puncher like Beterbiev, he might go down for the count early on. I doubt Top Rank would want Gvozdyk beaten so quickly before he’s even gotten a crack at WBC champion Adonis Stevenson, who he’ll likely lose to when that fight eventually happens.