Arum: Vargas will be a superstar if he beats Pacquiao 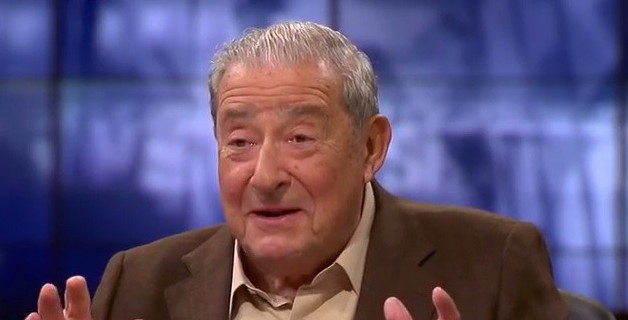 By Dan Ambrose: Top Rank promoter Bob Arum is talking about WBO welterweight champion Jessie Vargas (27-1, 10 KOs) being transformed into a superstar if he beats Manny Pacquiao (58-6-2, 38 KOs) in their fight this Saturday night at the Thomas & Mack Center in Las Vegas, Nevada.

Vargas about as far away as possible to becoming a superstar as anyone could ever get. He’s not really considered star material. One of the reasons for that was Vargas’ lopsided 12 round unanimous decision loss to Tim Bradley last year in June. Apart from a homerun right hand that Vargas landed in the 12th round out of sheer desperation, it was an embarrassingly one-sided loss for him.

Vargas was trying to hurt Bradley all throughout the fight, but he lacked the power and talent to do the job. Vargas did hurt Bradley in the 12th, but that was just Bradley being sloppy and not because he was hit with a shot that he couldn’t handle under a normal situation.

Arum said this to ESPN.com about his belief that the 27-year-old Vargas could be turned into a superstar if/when he beats Pacquiao on Saturday night:

“He becomes not just a champion but a superstar,” said Arum. I will deny to him that I said that, because I will have to negotiate his next fight. He would be a superstar. There is no question about that if he were to beat Manny Pacquiao. He has a hell of a shot to do that.”

Does Vargas become a superstar by just beating Pacquiao? I don’t think that’s how it works. You can kind of understand now why Arum has been so eager to match Pacquiao against one of his other Top Rank fighters in Terence Crawford. If Arum believes that a win over Pacquiao will turn one of his fighters into a superstar, then it’s not surprising why he’s been pushing so hard for Pacquiao to fight Crawford. Arum thinks it will turn him into a superstar.

I don’t think it will. Pacquiao is too old to turn anyone into a superstar. If Pacquiao was younger, and if guys like Crawford was proving he could beat other fighters in the 147lb division, then maybe. But I don’t agree that Vargas will be turned into a superstar or anything remotely close to a superstar. If things were that simple, then Bradley and Juan Manuel Marquez would be superstars after they beat Pacquiao.

The reality is if you stick Bradley and Marquez on pay-per-view without someone like Saul Canelo Alvarez, Floyd Mayweather Jr. or Pacquiao, they’re going to bomb. I don’t know of anyone that Pacquiao has fought that has turned into a superstar after beating him. He’s lost six times, and one of those was against Floyd Mayweather Jr. last year. Mayweather was ALREADY a superstar. Vargas is not going to be a superstar if he beats Pacquiao. It’s going to take wins over more youthful fighters for Vargas to become a superstar. It’s not easy to become a star nowadays, especially if you can’t punch like Vargas.

Here are the fighters that Vargas will likely need to beat for him to become a superstar:

Manny Pacquiao – This is going to be a very hard fight for Vargas to win, because he’s slower, easier to hit, and not shown the ability in the past to compete with a fighter on the same level as Pacquiao.

Keith Thurman – Vargas doesn’t have the speed, power, chin or the game to last 12 rounds with a guy like Thurman. This would be a knockout waiting to happen for Vargas.

Errol Spence Jr. – Vargas doesn’t have the punching power to last long against Spence. I doubt that Arum would ever green light a fight between them. I think Arum knows what would happen if he threw his Top Rank fighter Vargas in with a truly talented young fighter like Spence. It wouldn’t be pretty.

Shawn Porter – Vargas would get walked down and stopped by Porter in the same way Paulie Malignaggi did. This fight would be a massacre.

Terence Crawford – This is another fight Vargas would lose badly. I think Crawford wins 12 rounds to 0 in a shutout.

Danny Garcia – This is a fight that Vargas would have a chance of winning, as long as he doesn’t get hit with one of Garcia’s big left hooks. Vargas gets hit, and that’s a bad thing, because it would mean that he would need to be able to take Garcia’s best left hooks in order to beat him.

Saul Canelo Alvarez – Vargas lacks the power, speed or the sheer size to compete against Canelo, especially if he rehydrates into the 180s. Vargas would need to move up to middleweight to fight Canelo, and weight would be too much for him.

Gennady “GGG” Golovkin – Vargas doesn’t have the talent, power or the chin to hold up to 12 rounds of pounding from Triple G. Therefore, Vargas does not become a superstar.

Tim Bradley – Vargas will never beat Bradley no matter how many times they fight.

If Vargas beats all of these guys, then he will definitely become a superstar. Unfortunately when I look at that list, I have a hard time seeing Vargas beat any of those guys. Bradley beat Vargas in a way that suggests that he’ll always be able to defeat him. You could stick those two inside the ring 100 times, and Bradley beats him 100 times. The fact is if Vargas can’t even beat Bradley, then he surely won’t be able to hang with Crawford, Porter, Spence Jr., Thurman, Garcia, Canelo or Golovkin.

“What I am focused on is that I am in my prime,” Vargas said via ESPN.com. “I have a lot to show and I have a lot to give in this sport, and on [Saturday] I am going to perform at the highest level.”

“This is where I belong,” Vargas said. “I’ve been waiting for this moment since I was 8 years old. This moment is not so big. It’s here and I am going to take full advantage of it.”

Beating Pacquiao won’t do a thing for Vargas in my view. He’s going to need to prove that he can defeat the guys on my list before he can become a superstar. The key to Vargas becoming a superstar is by beating ALL of these guys: Keith Thurman, Errol Spence, Golovkin, Canelo, Danny Garcia, Porter, Pacquiao, Crawford and Bradley. There’s becoming a superstar on the cheap. You must good fighters over and over again to become a super star. Defeating Sadam Ali or an old Pacquiao isn’t going to do it.

Vargas feels that he’s learned from his loss to Bradley, but I think he’s learned the wrong lesson. Vargas seems to think he’s a puncher now, sand he lacks the power to be a that kind of fighter.

“It gave me that fire, that anger to — excuse me if I say it — to really hurt somebody or kill somebody inside that ring, and to take it and not have any compassion for my opponent,” said Vargas about his loss to Bradley last year. “That has built a stronger Jessie Vargas.”

Sanchez: Golovkin could go down to 154 for Pacquiao »