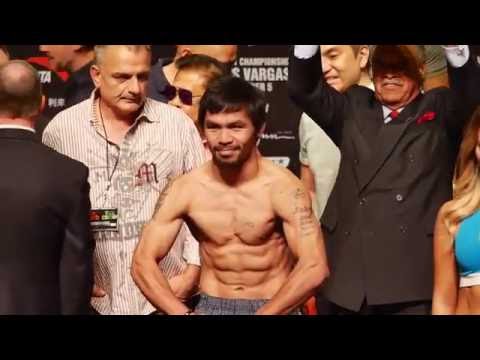 In just one day, boxing’s only eight division world champion and the reigning Fighter of the Decade Senator MANNY “Pacman” PACQUIAO (58-6-2, 38 KOs), from General Santos City, Philippines, collides with World Boxing Organization (WBO) welterweight world champion JESSIE VARGAS (27-1, 10 KOs), of Las Vegas. Pacquiao and Vargas will go mano a mano and toe-to-toe in a high-stakes welterweight showdown. While Pacquiao will be looking to become a three-time WBO welterweight champion as well as the first senator to win a world title, Vargas will be resolute in enforcing a term limit on the future Hall of Famer’s boxing career.

Pacquiao vs. Vargas takes place Tomorrow! Saturday, November 5 at the Thomas & Mack Center on the campus of the University of Nevada, Las Vegas. Pacquiao vs. Vargas and its three co-main event world title fights will be produced and distributed live by Top Rank® Pay-Per-View, beginning at 9:00 p.m. ET / 6:00 p.m. PT, and will be available on all conventional platforms, including all major cable and satellite systems, as well as Top Rank’s digital distribution via www.TopRank.tv and mobile devices.

Promoted by Top Rank, in association with MP Promotions, Wynn Las Vegas and Tecate, remaining tickets to the Pacquiao vs. Vargas world championship event are priced at $1,000, $700, $500, $300, $100 and $50, not including applicable service fees. Tickets may be purchased at the Thomas & Mack Center Box Office (except on Wednesday, October 19 because of the Clinton – Trump presidential debate), online at http://www.unlvtickets.com/, at UNLVtickets Outlet Town Square Las Vegas and La Bonita Supermarkets. To charge by phone call 702-739-FANS (3267) or 866-388-FANS (3267).

BoxNation will be the only place to watch boxing legend Manny Pacquiao’s ring return as he takes on WBO welterweight world champion Jessie Vargas on November 5th from the Thomas & Mack Center in Las Vegas.

The bout will be broadcast exclusively live on ‘The Channel of Champions’ BoxNation as eight-division world champion Pacquiao takes a break from his political commitments in the Philippines in a bid to become the only sitting Congressman and Senator to win a world title.

That task, however, will not come easy he steps in against the accomplished Vargas who has won all but one of his 28 fights, and, at 27-years-old, is already a two-weight world champion.

Future Hall-of-Famer Pacquiao is regarded as one of the best pound-for-pound fighters on the planet and has decided to carry on with his career in the ring despite expecting to hang up the gloves after being elected to the Philippines Senate in the summer.

“Public service is my calling but boxing is my passion. I realised this summer I was not ready to retire from the ring,” said Pacquiao. “I made history when I became the first congressman to win a world title and now that the good people of the Philippines have elected me to the Senate I want to make more history by becoming the first senator to win a world title. I promised the voters I would not miss a Senate session which is why I will be training in Manila until the Senate goes into recess in late October. I dedicate this fight to my fans and to my countrymen throughout the world who have kept me in their prayers. And as always, I fight to bring glory to the Philippines.”

Las Vegas resident Vargas is coming-off an impressive ninth-round stoppage earlier this year over the highly-touted Sadam Ali in which he claimed his second world title.

Vargas has always had his eye on the formidable Pacquiao and can’t wait to get revenge for the losses he inflicted on his fighting heroes.

“When I was younger I watched what Manny did to my two boxing idols, Erik Morales and Marco Antonio Barrera – two great Mexican warriors. I told myself, someday I would get into the ring against Manny and avenge what he did to them. Now I will fight for them as well as myself. To me, this fight isn’t about a friendly ring rivalry between our countries. This fight is about payback,” said Vargas.

Jim McMunn, BoxNation Managing Director, said: “It is fantastic that BoxNation will be showcasing Manny Pacquiao’s return to the ring exclusively live on November 5th. Pacquiao is among the most exciting fighters in the world and is rightly regarded as one of the very best pound-for-pound around today. BoxNation subscribers will be in for a great fight as he takes on the WBO welterweight world champion and a top fighter in his own right in Jessie Vargas. This fight will be action-packed as both boxers have exciting and come-forward styles that can only make for a thrilling spectacle.”


« Sanchez: Golovkin could go down to 154 for Pacquiao