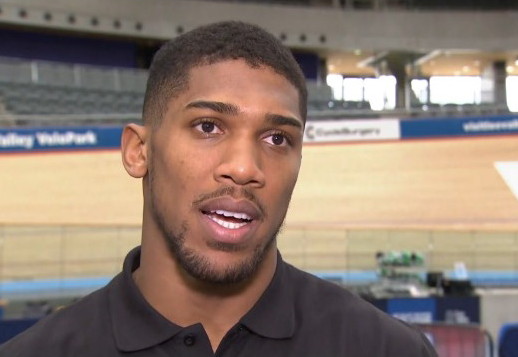 By Scott Gilfoid: IBF heavyweight champion Anthony Joshua (17-0, 17 KOs) believes his opponent Eric Molina (25-3, 19 KOs) will put out as much as 60% more effort next month in their fight on December 10 at the Manchester Arena in Manchester, England. Joshua believes that fighters give more of themselves when they fight in big fights like the one that Molina will be in next month.

Joshua thinks the 34-year-old Molina is the toughest guy of the ones they were looking at for him to fight. The other opponents that Joshua had to pick from were from this list: Bermane Stiverne, Kubrat Pulev, Hughie Fury, Johan Duhaupas, Joseph Parker, and Jarell Miller.

I can’t say that Molina was the toughest of this bunch. I do think Molina is a heck of a lot better than Hughie Fury though, but that’s the only one on the list that I feel that Molina is better than.

Even Duhaupas is a better fighter than Molina in my view. I think Joshua hand-picked the weakest heavyweight for him to fight.

Joshua said this to skysports.com about the Molina fight:

“Everyone ups their levels by 50-60 percent,” said Joshua. “The people I’ve seen time and time again are not the people I am going to face. When I look at it, I thought he was the toughest out of the few so that’s a good challenge for myself. That’s the one I have to focus on. I always knew I was going to have someone who was game.”

I don’t buy it that Molina is the best guy that Joshua picked from. I see him as being in the same category as Joshua’s last fight against #13 IIBF fringe contender Dominic Breazeale, who Joshua beat by a 7th round knockout last June. Instead of fighting a good opponent that could really test him, Joshua opted to take on Breazeale, who had recently won a controversial decision over journeyman Fred Kassi. Joshua might as well have defended his IBF belt against Kassi, because there were many boxing fans out there who felt that Kassi beat Breazeale.

I’m one of them. I thought it was so sad that Joshua chose to fight Breazeale rather than a talented contender in the division. But as they say, ‘coming events cast their shadows before.’ Joshua is reverting to form by taking on a weaker contender in Molina rather than a dangerous or difficult one. I’m learning more about Joshua with each and every fight he takes. I hate to say it, but I think Joshua is going to wind up a disappointing heavyweight champion.

If this is going to be the Joshua era taking over from the Klitschko era, I think we’re going to see a lot of milking of titles with Joshua in one mismatch after another against over-matched fringe contenders. When you see a champion – or his promoter – picking from near the bottom of the rankings for his title defense, then that tells you that there’s milking going on. It’s too bad.

I had such high hopes for Joshua when he first became the International Boxing Federation heavyweight champion in 2015 after his 2n round knockout win over Charles Martin. What I’ve discovered since is that Joshua isn’t exactly inspiring with his match-making that is being done for him. If Joshua has the final say so in how he fights, then he’s partly to blame for him being put in against over-matched opponents rather than guys that have a chance of beating him.

“That’s why he’s here now,” Joshua said. “Wilder is supposed to be known as a one-punch knockout artist, and [Molina] stood up to a lot of his punches. It shows that this man is here to push the champions to their limit.”

Molina didn’t prove anything in the fight Wilder fight other than he could take Wilder’s shots with him throwing at less than full power. Even with Wilder at less than full strength, he was able to drop Molina on four occasions before getting the stoppage. It was clear from the early point in the fight that Wilder had too much talent, too much power, and too much boxing skills for Molina to compete against him.

There are some boxing fans that think that Molina staggered Wilder in the fight, but this isn’t true at all. The shot that hit Wilder caused him to stumble because it was more of a pushing punch rather than a big power shot.

If Molina is going to win the fight against Joshua on December 10, then the best way to do is it to go all out in the first two rounds. That’s when Joshua tends to bum rush his opponents trying to score quick knockouts If there’s a weakness in Joshua’s game, it’s the way he fights on adrenalin rather than using his boxing IQ. Joshua fights to the roar of the crowd early in his fights, and that makes him vulnerable because he tries to slug.

With this being the heavyweight division, it only takes one big shot from almost anybody to KO a fighter. Joshua is no different. I saw how he was hurt and knocked out in the past when he fought in the amateur ranks in his KO loss to Mihai Nistor in 2011. It was the same Joshua that there is today in terms of his head. The shots that Nistor bounced off Joshua’s head in 2011 would likely do the same job if he landed them in 2016. The only difference is Joshua hasn’t been facing punchers since he turned pro in 2013. He’s been fighting weaker punchers.


« Hearn wants Haye vs. Bellew in January or February