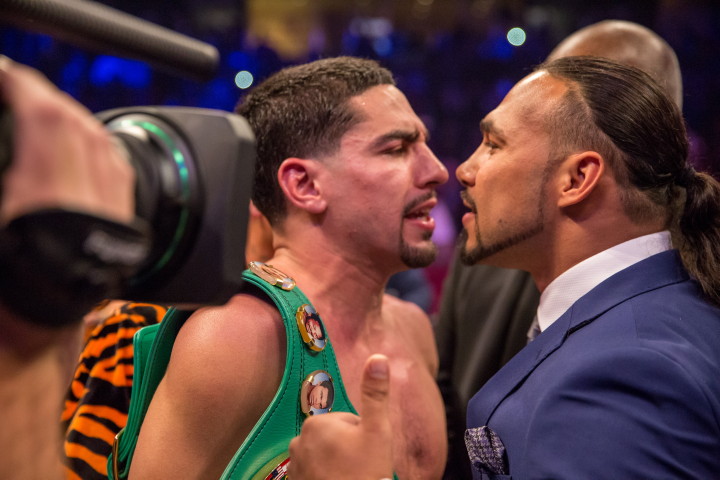 Thurman was in attendance to watch the Garcia-Vargas fight, and he came away unimpressed by what he saw of the hand speed and the mobility of Garcia. In Thurman’s opinion, the 28-year-old Garcia is “flat-footed and slow” and he plans on taking advantage of those weaknesses when they face each other on March 4 in a unification match at a still to be determined venue in the U.S.

There’s talk that the Garcia vs. Thurman fight could take place at the Barclays Center in Brooklyn, New York. The boxing fans are really looking forward to this fight. The fight should make news once February rolls around, as the hype machine gets rolling for both fighters.

Garcia’s shots last night were more of the snapping variety without a lot of weight put behind them. He doesn’t have the size, power or the body punching ability of Spence. That’s pretty obvious in looking at the two fights. Spence was a lot more devastating what he did to Vargas compared to Garcia.

Thurman said this to Fighthype.com about his thoughts on Garcia’s performance last night against the 27-year-old Vargas:

“It’s the fight he wanted,” said Thurman about Garcia’s tune-up mismatch against Vargas. “A tune-up, which sounds like a warm-up, which I hope you warned up, because next time you ain’t going to have it that easy. What he is missing is the fact that he don’t know [expletive] about ‘One Time.’ They’re going to learn something new real quick though. Honestly, I believe I’m one of the most evolving in the sport today. You can go out and watch my tape. You don’t have to see the replay, because I don’t come out the same way. I can fight moving forward. I can fight moving backwards. I got defense. I got offense. I can counter. I use footwork. I can manipulate the ring. I can give you want you want. I can give you what you don’t want. The diversity is real. He’s flat footed and slow,” Thurman said about Garcia.

There’s no doubt that Garcia looked flat-footed and not particularly fast against Vargas. Garcia does not have fast hands, and he’s never been capable of moving around the ring quickly. Garcia has been a flat-footed fighter since his amateur days. I don’t expect that to change now that he’s in his late 20s and about to fight his most dangerous opponent in Thurman. Garcia believes that Lucas Matthysse is a bigger puncher than Thurman. That may or may not be, but Matthysse doesn’t have the hand speed or the elusiveness that Thurman possesses.

Thurman is a lot trickier than Matthysse. Garcia was able to get the better of Matthysse by throwing a lot of jabs and low blows in the first eight rounds of their fight in 2013. With the referee doing nothing to address all the low blows that Garcia was throwing in the fight, it’s a surprise that Matthysse didn’t take matters into his own hands by teeing off on Garcia with his own low blows.

The referee would have been forced to do something about the low blows if both guys were throwing them constantly instead of just Garcia. Matthysse fought a dumb fight against Garcia, and that’s why he lost. Thurman won’t let himself get hit with low blows all night long without doing something about it.

If Garcia is going to let his shots stray low over and over again in each round, then you can bet Thurman will have an answer for that. It’s going to be hard for Garcia to throw low blows against Thurman, because he’s more of an outside fighter. It would look funny if Garcia is throwing long right hands low. He’ll get picked apart if his shots are thrown low from long range.

Vargas never stood a chance last night. He was dropped early by a right hand by Garcia in round two, and then pounded on the ropes in the 7th until referee Gary Rosato stopped the match at 2:17 of the round. Vargas looked like he’d had enough. Despite the fight being a mostly one-sided affair, Vargas had his moments in the fight. He didn’t make it easy for Garcia. He landed a lot of clean shots to the head and body. The main problem that Vargas had in the fight was his lack of punching power. He didn’t have enough power to bother Garcia.
“I got beat up in there,” said Vargas. “It takes a lot of courage to come to North Philadelphia and fight the champ. It just wasn’t my night.”

It wasn’t a real bad beating like the one that Vargas took against Spence. That was a bad beating because it was a relentless beating. Garcia fought in spurts, and mostly looked for single shots to the head. Spence was throwing combinations against Vargas, and putting a lot of emphasis on throwing to the body. It worked well, because he had Vargas wilting early in their fight. Vargas could not stand up to the power of Spence.

The Garcia vs. Thurman fight will be a good one. They’re going to be selling it as a fight to determine who the best fighter is in the 147lb division. I don’t see it as that way. Garcia-Thurman will determine one of the top fighters, but not the No.1 fighter. For the winner of that fight to be seen as the best, they’ll need to beat the likes of Spence, Kell Brook and Manny Pacquiao. Those guys are too good to be overlooked.

“Danny can talk whatever he wants and Angel Garcia can say whatever he wants,” said Thurman. “They can talk smack all day. Danny is real flat-footed. I believe I’ll be able to be on the outside, see the wide punches and counter punch. They said he wanted the tune-up, now he’s ready to see me.”

It should be interesting to see how Garcia’s power matches up with Thurman’s punching power and circle boxing. Garcia does well against fighters that stand in one place, and throw lead right hands. Thurman is different. He rarely stays in one place. Thurman likes to move, and throw left hooks. This could be a battle of left hooks on March 4. Garcia might have a little better left hook than Thurman, but not by much. Thurman is a pretty big puncher, and has the better hand speed. Thurman looks heavier as well. They’re both close to the same height, but Thurman has the size advantage right now. Spence is bigger than both of those guys. He’s going to be a problem for the winner of the Thurman vs. Garcia fight if their manager Al Haymon lets that fight take place.