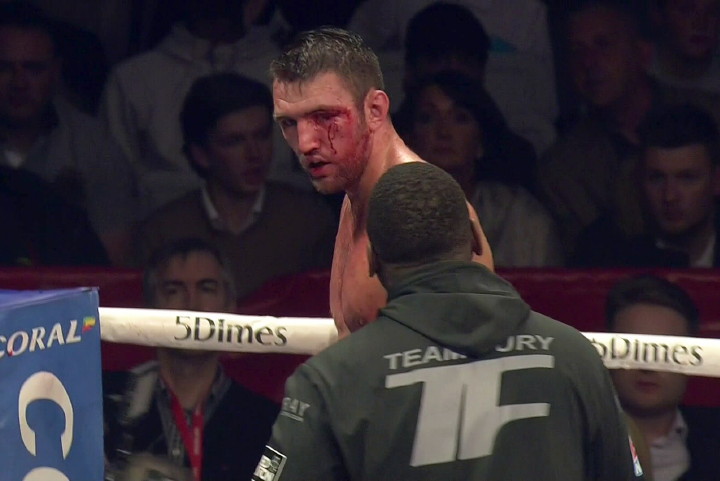 By Scott Gilfoid: After turning down a world title shot against WBC heavyweight champion Deontay “Bronze Bomber” Wilder (37-0, 36 KOs) in 2015, unbeaten #5 WBO, #13 IBF Hughie Fury (20-0, 10 KOs) could now be fighting him in March of 2017. Hughie and Wilder’s team are reportedly in talks for a fight in March.

This is interesting news, because I figured that Hughie would wait two or three more years before he fights for a world title. If he’s serious about wanting to get inside the ring with Deontay now, then he must really see some flaw in his arsenal that he thinks he can take advantage of. in fact, Hughie is yapping about seeing flaws in Deontay’s game that he believes he can exploit.

Deontay needs an opponent, and the 22-year-old Hughie would be perfect for him. By taking Hughie’s scalp, it could lure former heavyweight champion Tyson Fury into the ring to try and avenge Hughie’s likely knockout loss later on in 2017 or possibly 2018. Whenever Tyson Fury comes back, Wilder will be there ready to take his scalp as well. Beating the 6’6” Hughie would be the perfect setup for a much better match between Wilder and Tyson Fury in the future when/if Fury returns to the ring.

Hughie thinks he can come up with a lot of ways to defeat the 6’7” Deontay. Just what those ways are is the big picture. Considering how poor Hughie looked in his last fight against journeyman Fred Kassi, I’d say the chances of him beating Deontay are about zero. Kassi was taking over the fight in the 6th round when Hughie suddenly rammed heads with him, causing a big cut over the right eye of Hughie. It looked weird how Hughie slammed heads into Kassi.

Things were looking pretty desperate for Hughie until he suffered that cut. In the 7th, referee Terry O’Connor stopped the action to have the ringside doctor examine Hughie’s cut. It was at this time that the fight was halted. Kassi was getting the better of Hughie in the 7th as well. It looked like Hughie was on his way to getting knocked out in the fight, as he was very tired and taking heavy shots from Kassi. But with the fight being halted due to his cut, it allowed the match to go to the scorecards. I think this saved Hughie from being knocked out. As such, I can’t see Hughie being capable of causing an upset against Deontay. Heck, Deontay wouldn’t even need to use his right hand to get the better of Hughie, because all he needs to do is wait for Hughie to get tired around the 6th round. Once fatigue sets in, Hughie will be at the mercy of Wilder’s left hand.

Hughie reportedly turned down a title shot against IBF heavyweight champion Anthony Joshua due to the money not being good enough. Joshua’s promoter Eddie Hearn wanted the fight, but I guess the money wasn’t there for Hughie at the time. It’ll be interesting to see if Hearn offers Hughie a good payday in the future.

“We’re in negotiations with Wilder and hopefully it will come off so I can have a showdown with him,” Fury said to the mirror.co.uk. “I definitely see ways I can beat Wilder. Me and my dad (trainer Peter Fury) have already sat down and looked at plenty of ways I can beat him. Wilder is very beatable. He’s never fought a decent opponent. He just has a big punch and I can definitely take his shots. I’ve never been wobbled in my life or put down in any of my fights. I’ve got a good chin whereas Wilder is a bit chinny, to be honest.”

I don’t know how young Hughie can say that Deontay is “chinny” when he’s never been knocked out before during his career. Usually a fighter gets a reputation for having loss punch resistance after they’ve been knocked out, not before. As far as I can tell, the hard hitting Deontay has never been knocked down in his career. I think he was buzzed a couple of times by different fighters, but who hasn’t? Look at Cuban heavyweight Luis Ortiz. He was buzzed from a right hand from the light hitting Malik Scott last Saturday night. Scott isn’t known for his power. Any heavyweight can be hurt. But in order to take advantage of the situation, you’ve got to have T-A-L-E-N-T, and I don’t see Hughie having nearly enough of that ingredient for him to get the job done against Deontay.

I’d be very surprised if the Wilder-Fury fight gets made. My impression of Hughie and his team is that they’re looking to keep him unbeaten long enough for him to become the #1 mandatory challenger to Anthony Joshua. Once that happens, they would look to get a big money title shot against him. I don’t think Hughie would have any chances of winning, but it would be one of those win-win situations for Hughie nonetheless. Hughie would get that nice payday, so it wouldn’t matter that Joshua knocks him out.

Wilder is currently coming back from a bad biceps tear and fractured hand from his win over Chris Arreola last April. Wilder won the fight by a 8th round knockout, but the victory came at a huge cost in terms of him suffering two injuries to his right arm. Wilder will be defending his World Boxing Council heavyweight title against the winner of the Bermane Stiverne vs. Alexander Povetkin fight in 2017. Wilder can take a fight against Hughie possibly.

Will Tyson Fury get energized about wanting to avenge a Hughie knockout loss to Wilder or will he be apathetic about it? If Tyson can’t get motivated to continue his boxing career after seeing Wilder make easy work of Hughie, then I don’t know what will energize him. Perhaps Tyson won’t want to come back no matter what. If that’s the case, Hughie’s potential knockout loss to Wilder won’t be avenged by one of the Fury’s.