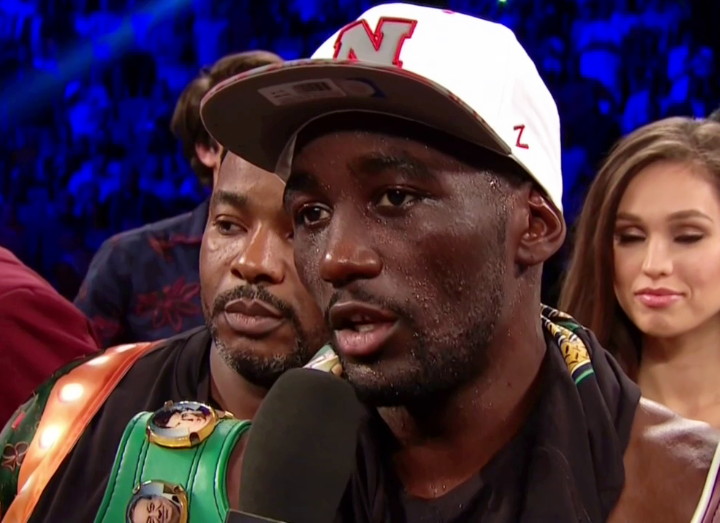 The 84-year-old Arum says he’s going to try again to match Pacquiao and Crawford against each other by trying match them in April next year. Crawford has a fight on December 10 on HBO World Championship Boxing that he needs to first.

Of course, the first thing that boxing fans will think with Arum talking Pacquiao-Crawford is the wily promoter is trying create interest in Pacquiao’s pay-per-view fight against Jessie Vargas, which doesn’t seem to be drawing much interest from the boxing world.

By Arum suggesting now that a fight between Pacquiao and Crawford is possible for April of next year, it might cause boxing fans to want to purchase Pacquiao’s fight against Vargas on pay-per-view. This kind of thing might have been one of the reasons why Pacquiao had such elevated pay-per-view numbers from 2009 to 2015, because fans believed that a fight between him and Floyd Mayweather Jr. was just around the corner.

Once Pacquiao and Mayweather finally faced each other, Pacquiao’s pay-per-view numbers dropped off badly against Tim Bradley in bringing in only 400,000 buys last April. Some fans would argue that there was no longer Mayweather in the background to give fans a reason to want to pay to see Pacquiao fight guys like Bradley and Jessie Vargas, neither of which is great fights.

“If Manny wins the fight and funny enough with Crawford going again in December, it’s possible to do an April fight if Manny and Crawford are successful,” Arum said RingTV.com. “Crawford against Manny — that’s a possibility. That would be a great match.”

Arum could be totally serious about a fight between Pacquiao and Crawford being possible for April next year, OR he could be just name dropping to try and create interest in Pacquiao’s fight against Jessie Vargas. It’s hard to say. You would think that Pacquiao would be better off fighting guys that the boxing fans would be interested in seeing him fight like Saul Canelo Alvarez, Gennady “GGG” Golovkin, Danny Garcia, Keith Thurman, Adrien Broner, Kell Brook or Amir Khan.

I believe all of those guys would be bigger fights for Pacquiao than putting him in with 140lb champion Terence Crawford, who failed to distinguish himself in his last fight for WBC light welterweight champion Viktor Postol last July on HBO pay-per-view.

If Arum is serious about wanting to put Pacquiao in with Crawford, he might need to have lower goals in terms of PPV numbers for that fight. If Arum thinks a fight between Pacquiao and Crawford is going to bring in 1 million buys or more, he might be disappointed if the numbers bring in only one-third of that total. Further, if Arum thinks that Crawford is going to be transformed into a superstar if he beats Pacquiao and takes his scalp, I think he could be disappointed as well.

You can’t make a star. The fighter has to have the star elements to their game. Crawford is a counter puncher who likes to run around the ring. Those are two strikes against Crawford right off the bat. To become a star, you need to be willing to take shots to look for knockouts, and make it exciting for the fans. Fans don’t fighters that stall out fights when they’re ahead in the later rounds like we saw with Crawford in his last fight against Viktor Postol last July. Crawford needed to risk everything to try and get that knocked. It’s what Golovkin and Pacquiao would have done. Instead, Crawford played it safe and just let the fight get stalled out.

I’m sure Arum will convince Pacquiao to fight Crawford, but I don’t see it ending well for either fighter. I think Pacquiao will lose because he won’t be able to cut off the ring on Crawford, who will likely run for 12 rounds. The results of that fight will be a lot of bored boxing fans that will be angry that they bought the fight on PPV, because they were hopping to see an exciting fight filled with slugging. When that doesn’t happen, neither guy is going to come out of it smelling like a rose. It won’t matter that Crawford won the mach. The fans will see it as a boring fight. If Pacquiao and Crawford do fight each other, then I would hope that they come into the fight 100 percent healthy, and that they both are ready to go out on their shields rather than play it safe like we saw with the Crawford-Postol fight.