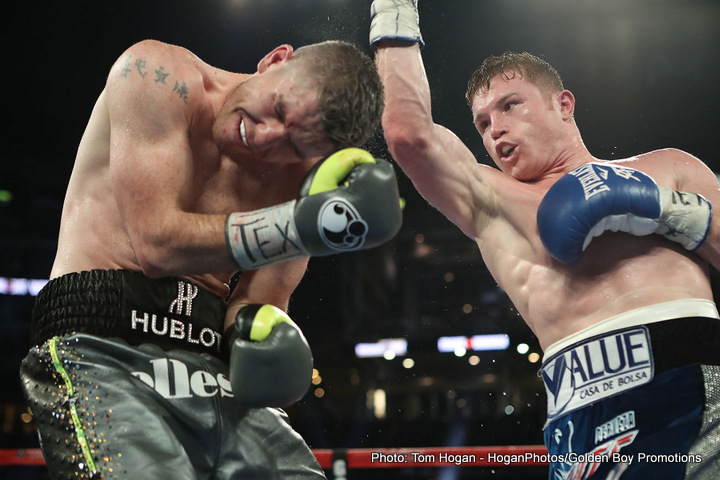 By Patrick McHugh: Mexican star Saul Canelo Alvarez’s fight against against WBO junior middleweight champion Liam Smith last month on September 17 brought in an attendance of 51,240 fans at the AT&T Stadium in Arlington, Texas. It was thought to be the most ever paid fans in the history at the stadium for a boxing event. However, according to Dan Rafael, the Canelo-Smith fight is No.2 drawing fans in the AT&T Stadium behind the Manny Pacquiao vs. Joshua Clottey fight that took place in 2010.

That fight drew 46,371 paying fans compared to the 46,115 paying fans the Canelo vs. Smith fight. Canelo-Smith had an overall attendance of 51,240 fans, but of that total, there were 5,125 complimentary [free] tickets given away to boxing fans for whatever reason. The Pacquiao vs. Clottey fight had 50,994 fans.

It’s admirable that Canelo’s mismatch against little known Liam Smith was able to bring in a lot of fans to see it, because if his promoters at Golden Boy had staged the same fight in Las Vegas, Nevada of New York. it would likely be lucky if even a tiny amount of fans showed up because the fans are lot more shrewd in those locales. They want to see quality fights, not just pay to see a fighter because of hero worship.

Canelo vs. Smith is said to have brought in just fewer than 300,000 pay-per-view buys on HBO Championship Boxing. That’s not the kind of news you like to hear for a fighter that is supposed to have taken over for Floyd Mayweather Jr. in carrying the sport of boxing on his back. That’s a huge drop off in buys from Canelo’s fight against Amir Khan last May, and the 900,000 buys his fight against Miguel Cotto brought in last November.

You can argue that the only reason those fights brought in a decent number of buys is because the fans thought that Canelo would fight Golovkin next. They thought the winner of the Canelo vs. Cotto fight was going to fight GGG. That was what the deal was supposed to be. Then when Canelo fought Khan, it was an interim fight in which Canelo was supposed to fight Golovkin immediately after. Instead, Canelo vacated his WBC title and moved down to 154 o fight little known WBO junior middleweight champion Liam Smith, who many boxing fans felt was the weakest and least known of the 154lb champions. When Canelo took the Smith fight, it was clear to all that he wasn’t going to be fighting Golovkin next.

You can say the low PPV numbers for the Canelo-Smith fight are a result of the fans realizing that there would be no big fight on the horizon for Canelo against Golovkin. Instead, the most the fans can likely look forward to is Canelo fighting WBO middleweight champion Billy Joe Saunders in early 2017. Saunders is very similar to Liam Smith in terms of limited talent and the perception by many boxing fans that he’s the weakest of the 160lb champions.

If Golden Boy Promotions wants to dramatically bump up the pay-per-view revenue for Canelo’s fights in 2017 without matching him in a dangerous fight against Golovkin, they can try one of two strategies: A. Golden Boy can name drop Golovkin’s name constantly by saying that the fight with Canelo will ABSOLUTELY take place in September 2017. However, instead of making that fight, Golden Boy can do the bait and switch by matching Canelo against the likes of David Lemieux or Saunders. B. Golden Boy can tell the boxing fans that the Golovkin fight will take place in May 2018 on the Mexican holiday. If the fans hear a specific date for the Golovkin fight, then they might be more willing to purchase Canelo’s PPV fights in 2017 against the likes of Lemieux and Saunders. Those guys are no bigger names than Liam Smith. normally a poor match-up like that would be lucky if it brought in 300,000 buys on HBO, but the fans might feel differently if Golden Boy keeps talking up a fight between Golovkin and Canelo for early 2018. Once 2018 comes around, Golden Boy can do the same thing they did in 2017 by name dropping Golovkin’s name a great deal and saying the fight will take place in September 2018. They can then push the fight to 2019. At some point, the boxing fans will stop believing the excuses and assume the fight will never take place. At that point, it would definitely be time for Golden Boy to make the Canelo-Golovkin fight in order to save Canelo’s dying PPV numbers. The fans are only going to be willing to see so many mismatches on PPV involving Canelo if they think that a fight against Golovkin is just over the horizon. If that fight fails to take place by a certain point, then it will absolutely be crucial that Golden Boy make the fight with Golovkin if they don’t want to destroy the Canelo brand by having too many mismatches against weak opponents in showcase fights. Golden Boy is already hurting Canelo’s brand by matching him against lesser fighters like Smith, Amir Khan, Alfredo Angulo and James Kirkland instead of against the relevant fighters from the 154 and 160 pound divisions.


« The WBC Is In Mourning; Bhumibol Adulyadej King Of Thailand Has Died