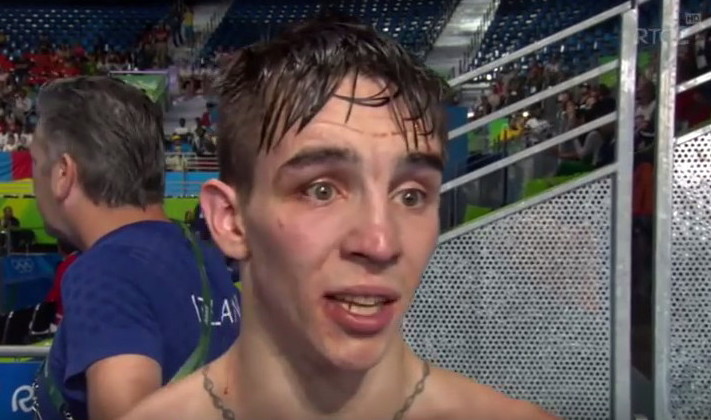 By Allan Fox: Two-time Irish Olympian Michael Conlan has reportedly signed a multi-fight deal with Top Rank promotions to have them guide his career. Conlan plans on fighting in the super bantamweight division.

The 24-year-old Conlan twice fought in the Olympics in getting beaten in 2012 and 2016. There some controversy involved with Conlan’s loss to Russia’s Vladimir Nikitin in the 2016 Summer Olympics in Rios de Janeiro in the quarterfinals of the bantamweight division. Conlan was pretty upset about his loss, but you can understand what the judges were seeing.

Conlan was bouncing around on the outside with his hands down way too much without throwing punches. I thought it was a waste of time and energy, because Conlan wasn’t taking the fight to the Russian Nikitin. It was Nikitin who was pressing the action. Conlan is going to need to change his style of fighting because he’s not going to go far in the pro ranks unless he learns to fight harder, stop bouncing around on the outside, and keep his hands up to protect his head.

In a strange twist, Conlan won’t be fighting in the UK. He’ll be fighting mostly in the U.S. That seems very weird. Conlan would be better off fighting in the UK where his fans are at. I’m not sure if that’s a smart move. Look at Carl Frampton. He packs in huge crowds in Northern Ireland for his fights. With the way boxing is in the U.S, it might be hard for Conlan to become a big draw over here. Top Rank is taking a gamble in signing Conlan and having him fight in the U.S rather than Ireland. I’m just saying. I don’t understand that move.

Conlan will be fighting for the first time as a pro next March at Madison Square Garden in New York. It’ll be on St. Patrick’s Day weekend. Top Rank plans on keeping Conlan busy in 2017 by having him fight six times.

Top Rank has had some success with two-time Olympic gold medalist Vasyl Lomachenko in having him come over to the U.S to fight. Lomachenko is a good fighter, but it remains to be seen if he’ll ever make the leap to stardom in the U.S in fighting at super featherweight. Lomachenko might need to move up in weight if he wants to become a star in the U.S.

“I think this is an incredible signing for Top Rank and incredible for boxing in America, because he will fight the majority of his fights here in the U.S., building a big fan base in the Irish community,” Top Rank executive Todd duBoef said to espn.com.“We think he is the next big star in boxing in America. There’s a huge Irish population here in the United States.”

It’s possible if they only have Conlan fighting in New York, he can be a regional draw. I don’t think it’s going to translate to ratings on HBO. I doubt that. I think Conlan will be able to draw fans in New York for his fights over there. I still think Conlan would have been better off staying in Europe like Carl Frampton. He’d be able to draw a lot of fans over there.

If Top Rank could match Conlan against Lomachenko, it would be a great little fight for New York. I doubt that they’ll do that though. Lomachenko is on another level than Conlan. He’s just a much better fighter overall. Still, a fight between these two guys would be big news, and I think boxing fans in the New York area would want to see them fight. I don’t think the fight would bring in big ratings on HBO, because the viewing audiences like to see knockouts and thrilling slugging matches.

Conlan’s style of fighting involves a lot of bouncing around on the outside with long spells of inactivity due to the bouncing. If Top Rank could work on tweaking Conlan’s fighting style to have less boxing and more actual fighting, I think he might do well in the pro ranks. In looking at Conlan’s losses in the amateur ranks, it was due to hm not engaging enough. He spent too much time using feints and not throwing punches.