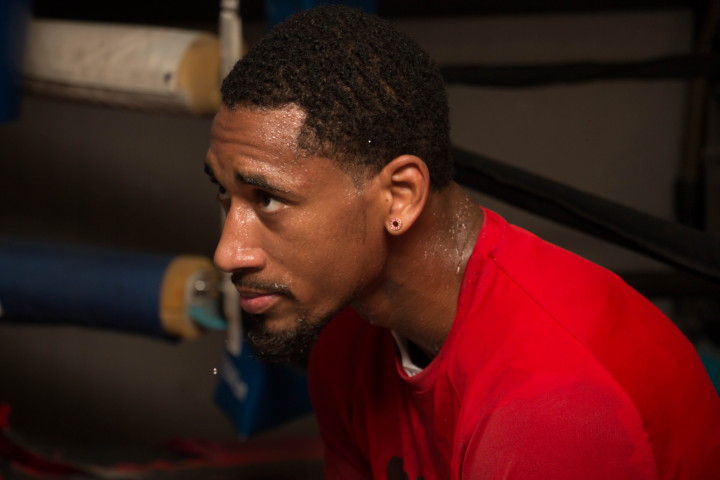 By Patrick McHugh: Former 154lb champion Demetrius Andrade is calling out Saul “Canelo” Alvarez to fight him now that he’s the WBO junior middleweight champion after his 9th round knockout win over Liam “Beefy” Smith on September 17. The unbeaten Andrade (23-0, 16 KOs) is the number one challenger for the WBO 154lb belt that Canelo now holds, and he wants to fight him to prove that he’s the better fighter of the two.

Canelo is now talking about moving up in weight to challenge the best fighters in the 160lb division despite the fact that you can argue that he failed to fight the best guys at 154 like Andrade, Julian Williams and the Charlo brothers.

Demetrius Andrade, 6’1”, would have the height, reach, power and the boxing skills to give Canelo fits if that fight were to be made. Andrade is a former 2008 U.S Olympian, and former WBO 154lb champion. He’s got the size, talent and the ability to beat Canelo. Andrade is in the same boat as unbeaten Gennady “GGG” Golovkin in the fact that he cannot force Canelo to fight him, Andrade can call Canelo out, and point out that he believes him to be scared, but that’s probably not going to get the Mexican star to fight him.

Golden Boy has their own plans for Canelo, and the guys that he’ll likely be fighting from this point on will be from the middleweight division. That doesn’t mean that Canelo won’t occasionally be matched against a welterweight and junior middleweight here and there. A rematch between Canelo and Miguel Cotto is a given. It’s not whether the two of them will face each other again; it’s a question of when. They made too much money for their fight last November for them not to fight again. Besides that, Canelo has the size and youth to beat Cotto every time. There’s no threat for Canelo in fighting the 35-year-old Cotto. Fighting Demetrius Andrade would be a huge threat for Canelo because he’s got the boxing skills, power and size to give him a lot of problems.

It looks like Canelo, 26, is going to be vacating his World Boxing Organization junior middleweight title rather than sticking around to fight Andrade, Williams, Erislandy Lara or the Charlo brothers. Canelo beat Liam Smith to win his WO title, and that seems to be enough, as far as he and his promoters at Golden Boy promotions are concerned. Canelo is supposed to be working his way up to getting acclimatized to the 160lb division in moving up in weight.

Andrade and the other top 154lb fighters don’t appear to be in the future picture for Canelo unless they too move up in weight and try to get a fight against him somehow. Canelo will be facing Billy Joe Saunders or David Lemieux in his next fight if he’ll out of the ring until May of 2017. That’s a pay-per-view date on HBO for Canelo. There’s a chance that Canelo could fight in early 2017 on regular HBO, but that remains to be seen. Canelo suffered a fractured right thumb in his win over Liam Smith on September 17. The injury will keep Canelo out of action for the remainder of 2017. He and Golden Boy had plans for a fight on December 10 against a top middleweight, but that’s not going to happen now.

Hearn expects Fury to be stripped of titles »