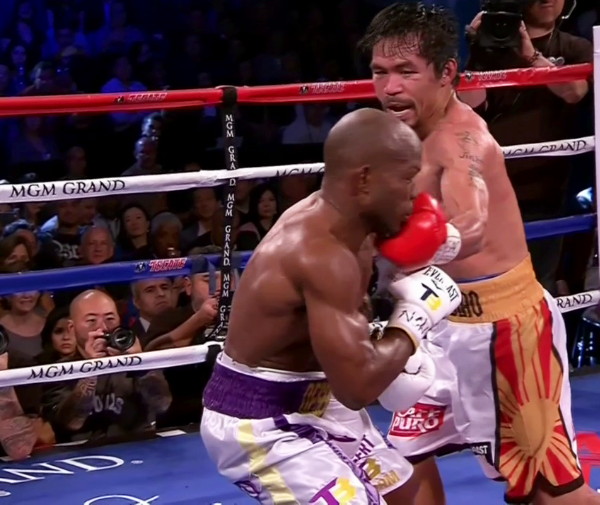 By Dan Ambrose: Manny Pacquiao was supposedly going to be fighting for a world title in his next fight against World Boxing Association welterweight champion Jessie Vargas on November 5. At least this is what Pacquiao’s personal adviser Michael Koncz said this week. He said the decision had already been made about Pacquiao’s next opponent with the 27-year-ol Vargas being the guy he would be facing.

Pacquiao’s promoter Bob Arum now says that nothing has been decided about the Filipino star’s next fight, and that he’ll be flying over to the Philippines on August 9 to talk with him about picking between his Top Rank candidates Terence Crawford and Vargas.

With the way that Arum is talking, he has some boxing fans thinking that he wants Pacquiao to fight Crawford next rather than Vargas. Just why Arum would care either way is unclear, because he promotes Vargas and Crawford. It shouldn’t matter to Arum which of the two gets the fight as long as one of them does because they’re both in his Top Rank stable.

Here are the top five reasons why I think Pacquiao should choose the 28-year-old Crawford:

1. Selecting Crawford would likely help Arum and Top Rank by Pacquiao passing the baton to the next potential pay-per-view star in Arum’s stable. If Crawford can beat Pacquiao, take his scalp in a one-sided contest or by brutally knocking him out, it would help validate the Omaha, Nebraska in the eyes of many boxing fans.

2. It would be seen as a brave move by Pacquiao to take on the toughest fighter in Arum’s Top Rank stable. Right now, there are many fans who feel that Pacquiao is ducking Crawford due to the fight being a potentially tough one that he could lose. By agreeing to take the fight with him, Pacquiao would show courage and take on the best fighter in Arum’s stable at 140. I don’t think Crawford is even close to being Arum’s best fighter in his promotional company. I think Vasyl Lomachenko and Oscar Valdez are far better fighters than Crawford and much more exciting to watch. But those guys fight in weight classes where it’s hard to become a pay-per-view attraction. Crawford is in the wrong weight class as well to become a PPV star, and he’s obviously going to need to move up to welterweight for him to become a star. Crawford won’t go far as a future pay-per-view fighter if he’s going to be stuck fighting guys like Raymundo Betran, Thomas Dulorme, Dierry Jean and Viktor Postol. I don’t care who you are, you’re not going to be able to produce a lot of PPV buys fighting those guys. Arum is going to need to figure out how to get Crawford the competition to make him a star, because beating Pacquiao is not going to be enough.

3. There’s a little bit more money for Pacquiao to make fighting Crawford rather than Vargas on HBO pay-per-view. I doubt that the money will be much more for Pacquiao, but he’ll likely make a tiny bit more money fighting Crawford. If Pacquiao is interested in making the most money possible for his next fight, then Crawford is likely the way to go for him rather than Vargas. Of course, if Pacquiao really wants to make the most money for his next fight, then he probably should reject Crawford and Vargas completely as potential opponents for his November 5. Pacquiao can probably make a lot more money fighting Danny Garcia, Keith Thurman, Miguel Cotto or Saul “Canelo” Alvarez. I wouldn’t be surprised if even Amir Khan vs. Pacquiao would be a bigger fight on PPV than either Vargas or Crawford. If Pacquiao wants to make as much money as possible, he needs to insist on getting access to the best fighters, period. Right now, Pacquiao is fighting a lot of Arum’s Top Rank stable fighters and hits and miss as far as the PPV buys go. I don’t think Pacquiao has gotten any less popular than he was in the past. I think the match-making that is being done for him is poor. If you take away Pacquiao’s fight against Floyd Mayweather Jr. last year, you’re left with Pacquiao’s opponents being lame choices like Chris Algieri, Tim Bradley x 3, and Brandon Rios. With those guys as Pacquiao’s opponents, it’s no wonder what we’re seeing a drop off of his PPV numbers. I don’t think it’s Pacquiao getting less popular. I think it’s Pacquiao being matched against guys that boxing fans do not want to pay to see. It’s a no-brainer. Even if Mayweather were matched against Algieri, Bradley and Rios, he wouldn’t get a lot of PPV buys either. If Mayweather were matched against Crawford or Vargas, I think the PPV buys would be around the same as his fight against Andre Berto. In other words, the PPV buys would likely be extremely poor. Like I was saying, if Pacquiao wants more PPV buys, then he needs to fight guys like Thurman, Garcia, Cotto or Canelo, because I see Vargas and Crawford as doing nothing for him. Pacquiao will be doing something for Top Rank in agreeing to fight those guys, but I don’t see those fights benefiting him. If anything, I think those fights hurt Pacquiao’s earning potential, because they’re not fights that boxing fans want to see. There are some hardcore fans that love Crawford’s constantly moving style of fighting, but there aren’t enough of them. For the most part, you can argue that casual fans don’t know who Crawford is. There’s no upside in Pacquiao fighting him if he wants to make the most money. But if all Pacquiao is being given is two choices, Crawford or Vargas, then obviously the Crawford fight will make a little more money.

4. Pacquiao’s legacy will be enhanced if he beats Crawford, because it would be a better victory for him than it would be if he beats Vargas, who is seen as a paper champion in the eyes of a lot of boxing fans.

5. Taking the Crawford fight would give Pacquiao the chance to show what he would have done against Mayweather if he had two healthy arms. Pacquiao went into the Mayweather fight with an injured right shoulder that he’s since had surgery on. Pacquiao’s trainer Freddie Roach has said repeatedly that he beats Mayweather with two healthy shoulders. Well, now Pacquiao has a chance to beat someone with a similar style to Mayweather in Crawford. If Pacquiao can beat Crawford, then some boxing fans would surmise that he would beat Mayweather as well. The one big problem with that is Crawford is slower than Mayweather in terms of hand speed and reflexes, and he doesn’t move as much.