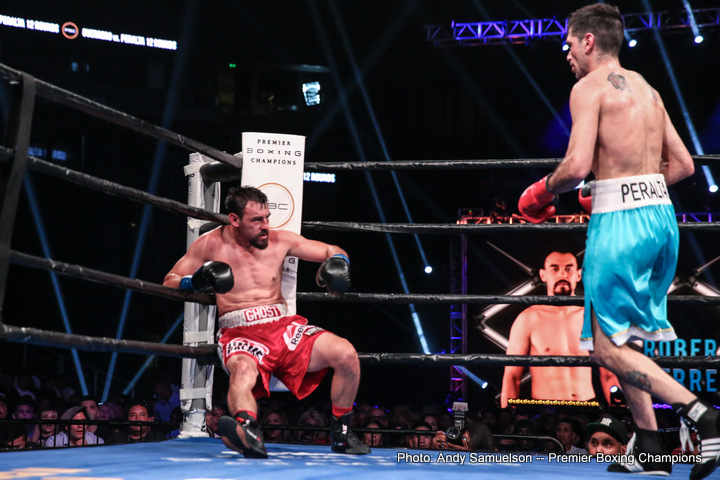 By Dan Ambrose: #13 WBC welterweight contender Robert “The Ghost” Guerrero (33-5-1, 18 KOs) seems to be in real denial about his 12 round split decision loss to unheralded Argentinian David Emanuel Peralta (26-2-1, 14 KOs) last Saturday night on Premier Boxing Champions on Spike from the Honda Center in Anaheim, California.

Guerrero, 33, thinks he should have won the fight despite the fact that he totally caved in from round five to twelve of the contest. Guerrero gassed out in a way that left no doubt who the better fighter was between the two aging welterweights. That’s not to say Peralta looked good, because he didn’t. It was a case of Guerrero looking dreadful after the 4th round.

Guerrero was knocked down in the 9th by Peralta. The referee didn’t count it as a knockdown, but it definitely was a knockdown. Guerrero got hit by a right-left combination from Peralta that dropped him into the ropes like a tall spider. It was pretty sad to see how a referee could miss such an easy call. Never the less, Guerrero wasn’t going to win the fight, because he was getting pummeled and outworked by Peralta.

The judges had the final say so in giving Peralta the win by the scores 116-112 and 115-113 for Peralta and 115-113 for Guerrero. The scores in favor of Peralta seemed fair. It’s hard to know which fight the judge was watching who scored it in favor of Guerrero. How he could give the win to Guerrero with the way he fought is hard to know. Guerrero looked exhausted after the fourth round to the point where his power disappeared on his punches and he stopped throwing shots. It was impossible for me to give Guerrero more than one round in the last eight rounds of the fight.

“I thought I clearly won the fight. For the judge to say I lost eight rounds sounds crazy to me. Peralta was very awkward but I felt I won. I won the rounds when I boxed. This is very disappointing but I’ll be back, that you can count on,” said Guerrero.

What was interesting about Guerrero’s comments last night was the fact that he wasn’t talking rematch against Peralta. The logical thing for the 33-year-old Guerrero to have done after his defeat was to use the soap box to stand on and tell the boxing fans on PBC on Spike that he absolutely wanted a rematch with the Argentinian Peralta.

Guerrero didn’t do that though, and it makes you wonder whether he feels he’s got the talent or not to get the job done in a second fight against him. The way that Guerrero lost to Peralta, I don’t think he could beat him if they fought each other 100 times. Peralta is too tall, too light on his feet, and too energetic for Guerrero at this point in his career. Yeah, Guerrero hits harder than Peralta, but it doesn’t matter because he’s not able to land with a great enough frequency to win the rounds.

This is the same kind of thing that Guerrero was saying after his 12 round unanimous decision loss to Danny Garcia last January in their fight for the vacant World Boxing Council 147lb title. Like in last night’s fight, Guerrero fought well in the first part of the fight, but then he fell apart in the last six rounds. Garcia clearly won the fight by a 12 round decision, and yet Guerrero has been complaining ever since that he should have been given the decision. Guerrero wants a rematch with Garcia, but it’s just not going to happen. It’s definitely not going to happen after Guerrero’s loss to Peralta. Instead of Guerrero talking about wanting a rematch with Garcia, he needs to be calling out Peralta to try and avenge his loss from last night.

Guerrero looked like he was going to easily win the fight last night after four rounds. He was landing really hard shots that made a lot of noise on impact. Compared to the punches that Peralta was landing, it was Guerrero was fighting someone with the punching power of a lightweight rather than a welterweight. Peralta had no power whatsoever. However, after Guerrero stopped throwing punches in the 5th, it didn’t matter that Peralta’s shots lacked pop. He was clearly bothering Guerrero with his limited power by simply hitting him a lot, and then using his quick feet and long reach to get away before the southpaw Guerrero could counter him. Despite having limited talent, Peralta looked good, because the aging, stamina-plagued Guerrero made him look good.

Peralta had come into the fight with past losses to Cristian Nestor Romero and Claudio Alfredo Olmedo. Peralta had some excuses about both losses, but the fact of the matter is, he lost to those mediocre fighters in the past, and he should have lost to Guerrero last night if he had anything left in the tank. But at 33 and after many wars during his career against top fighters, Guerrero does not look capable of beating even 2nd tier guys like Peralta any longer. We saw that last year in Guerrero winning a questionable 10 round split decision to high level journeyman Aaron Martinez in June 2015. Guerrero was knocked down in that fight in round four, and pretty well dominated until he rallied in the second half of the contest to win a controversial split decision.

“Yes, I want to fight bigger names now, no way I’m going to retire now. I’ll be ready again to fight soon, this was no joke and I can beat a lot of great fighters,” said Peralta.

It’s likely Peralta will get some bigger fights in the near future on Premier Boxing Champions. A match between him and he recently beaten Sammy Vasquez would be a good fight. Peralta vs. Felix Diaz would also be a very good fight. I can’t see Peralta beating either of those fighters, however, but they would be good fights nonetheless. Peralta needs to make the most from his win over Guerrero as fast as possible, because I think the window is going to close on him quickly if he doesn’t take advantage of this win right away. I think Peralta’s shelf life will expire after one fight if he gets matched against one of PBC’s fringe contenders. It won’t take a top five contender to beat Peralta in my view.

It doesn’t sound like Guerrero plans on retiring from boxing. I think he might change his mind if he loses two or three more fights against lower level fighters. Guerrero’s fights against Peralta and Aaron Martinez showed clearly that he’s no longer a factor at 147. When it gets to the point where Guerrero can’t even beat 2nd tier fighters like Peralta, then it’s time to hang it up. The thing is I don’t know what Guerrero’s manager Al Haymon can do with him. He can’t put Guerrero in main events if he’s going to lose. Also, I don’t think it works if Guerrero is going to be fighting against 2nd tier guys rather than quality fighters. I was surprised that Guerrero’s fight against the little known Peralta made it onto a main even on PBC card. Having Guerrero continue to fight this level of opposition can’t be good, but what can you do with him? If Guerrero gets put in with a decent quality welterweight like Lamont Peterson, Diaz or Vasquez, I see him losing badly to all three of them.