Shannon Briggs vs. Alexander Dimitrenko official for May 21 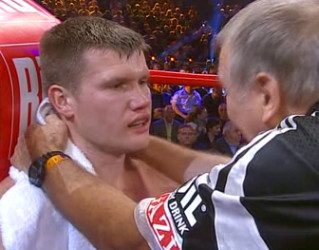 By Scott Gilfoid: As of today, the heavyweight match between former WBO heavyweight champion Shannon Briggs (59-6-1, 52 KOs) and 33-year-old Alexander Dimitrenko (38-2, 24 KOs) is now officially been added to the David Haye vs. Arnold Gjerjaj card on May 21 at the O2 Arena in London, England.

I’m going to go on record right now by saying I don’t think Briggs can beat Dimitrenko. It’s bad that Briggs was given someone so similar to Vitali Klitschko in size and fighting style. Briggs was as harmless as a baby in his loss to Vitali in 2010. By having Briggs fight Dimitrenko, it puts Briggs in a nearly impossible situation to try and win this fight to get the Haye fight later this year.

This is the fight that Briggs must win for him to get a payday match against Haye later this year. Briggs, 44, recently came to the UK to force Haye, 35, to give him a fight, and Haye finally relented by telling Briggs that if he agrees to fight on his undercard on May 21, he’ll give him a fight if he wins his next fight.

It sounds good but it’s not going to be easy for Briggs to beat the 6’7” Dimitrenko because he’s a solid 2nd tier fighter and would give problems to many of the fringe contenders in the heavyweight division.

I think Dimitrenko would give Dereck Chisora many problems with his height and his reach.

What’s troubling about Briggs having to fight Dimitrenko on Haye’s undercard on May 21, is that Dimitrenko is probably a better fighter than the guy Haye is fighting in Gjerjaj.

Dimitrenko has better size, experience and boxing skills than Gjerjaj. It’s understandable why Haye would want to take a soft touch in his next fight because he’s been out of the sport for many years, and he’s trying to get a payday fight against IBF heavyweight champion Anthony Joshua.

I think Haye is less concerned about fighting the best and more focused on winning and getting that payday fight against Joshua. Haye obviously isn’t going to risk missing that payday by taking on someone good that could potentially beat him. Let’s be real; Haye has gotten older and isn’t even as good as he was back in 2011, when he was easily beaten by Wladimir Klitschko.

Haye is older now and not willing to take chances before he gets the fight against Joshua, which some boxing fans see as a cash out fight against Joshua. Haye made a reported $12 million for his fight against Klitschko in 2011. It’s unclear if there’s anything left of that money. What is clear is he wants another big payday and Joshua gives Haye his best chance of getting that payday.

In judging by Haye’s body language and the stiff opponent that is being given to Briggs to earn a fight against him, I get the impression that Haye isn’t eager to face the hard hitting 6’4” Briggs. Say what you want about Briggs being old and rusty at 44, he can still clearly punch with major power even at his ripe age.

All it takes for Briggs to end Haye’s chances of getting his big payday against Joshua is one big right hand or left hook and it’ll be curtains for Haye. Briggs punches with major power with either hand. He’s one of those type of heavyweights. The thing that Haye has in his favor is Briggs’ timing and hand speed appearing to be eroded from age and inactivity. However, Haye is in the same boat and he’s smaller than Briggs. 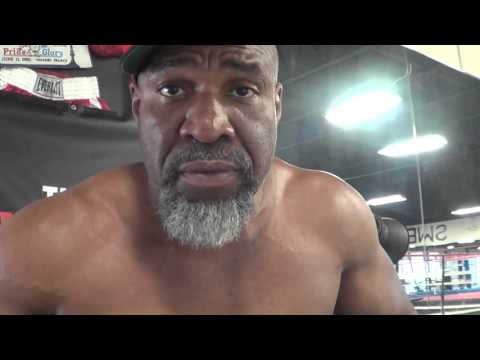 If Haye can’t knock Briggs out early in the fight, as he did with his recent hapless opponent Mark De Mori last January, then it’ll mean that Haye will need to take some of Briggs’ big power shots over the course of the fight. I don’t have much faith in Haye’s chin.

I think that’s his weakness. He doesn’t take shots well and he doesn’t appear to like getting hit. Briggs hasn’t lost a fight since his one-sided beat down at the hands of the 6’7” Vitali Klitschko in 2010. Briggs didn’t land much in that fight due to Vitali being so much bigger than him. Briggs also injured his left bicep early in the fight and was forced to fight with just his right hand.

Dimitrenko said, “Brigg’s is a loud fool, I will do my talking in the ring and he won’t know what’s hit him. The fight will see a former world champion lose in epic style to a future world champion. He is now the champ of Instagram but that’s where his reign ends. Brigg’s is going to learn first-hand what a hard hitter I am!”

Dimitrenko is going to make it really tough on Briggs to get his fight against Haye. I won’t be surprised at all if Briggs loses this fight because Dimitrenko has the size, style and ability to do to Briggs the same thing Vitali Klitschko did in 2010.

The Other Fury: Hughie »