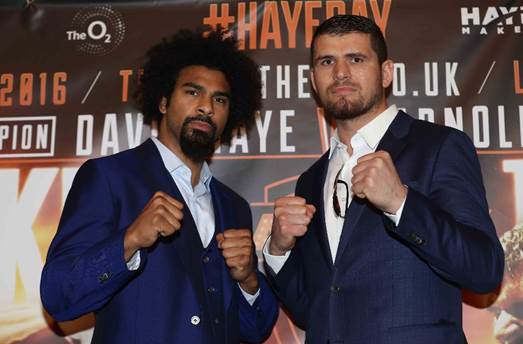 UKTV’s leading free-to-air entertainment channel Dave has secured the exclusive UK rights for former two-weight world champion David Haye’s latest fight as he continues his comeback to the ring. ‘Haye Day’ will once again air on Dave, live from The O2 on Saturday 21 May.

A peak audience of 3.2 million people tuned into Dave in January to watch ‘The Hayemaker’ return to the ring for the first time in three and a half years and knock out Mark de Mori in 131 seconds. Haye, one of only two boxers to have unified the cruiserweight division and won the heavyweight world title, now turns his attention to Arnold ‘The Cobra’ Gjergjaj – the EE-EU heavyweight champion from Kosovo who is unbeaten in 29 fights (21 KOs). ‘The Cobra’ has real pedigree having sparred with some of the biggest names in boxing including current WBA, WBO and IBO heavyweight world champion, Tyson Fury, and the man he won those titles from, Wladimir Klitschko.

Also fighting on the Haye Day bill is former two-time world heavyweight champion Shannon Briggs, with the view to a showdown with David Haye later in the year if both are victorious. Nicknamed ‘The Cannon’, Briggs brings a wealth of experience with a record of 59 wins (52 KOs) and six loses. Briggs has been actively pursuing a fight with The Hayemaker for a number of months but will have to overcome former European heavyweight champion Alexander Dimitrenko, who boasts a record of 38 wins (24 KOs) and only two losses, in order to secure a future fight with Haye.

Haye Day will also see two Essex-based middleweights fight for the English title as ‘Smokin’ Joe Mullender takes on Lee ‘Banjo’ Markham over 10 rounds. The personal rivalry between the two hard hitting, all-action middleweights provides the ideal warm-up with neither fighter willing to taking a backward step in what promises to be a battle that goes the distance.

Commenting on the announcement, David Haye said, “I’m thrilled that my latest fight will once again be free-to-air on Dave. I was overwhelmed with the peak audience of 3.2 million who tuned in to my fight against Mark de Mori. Boxing is booming in the UK right now and these figures prove it. I always said I wanted to bring boxing back to the masses and in partnership with UKTV we really did do that in January.”

He adds, “I was really impressed with the coverage and production of my comeback fight and I’m looking forward to once again be fighting on Dave and taking the sport to a broader audience. This Haye Day will feature a longer live show with an even better undercard and more musical entertainment. It promises to once again be a must-watch event.”

The Hayemaker, who was the first British boxer to become a unified cruiserweight champion in 2008, as he won the WBA, WBO, and WBC titles, as well as The Ring magazine honour. Haye then moved up to heavyweight and won the WBA title in 2009 after defeating Russian giant Nikolai Valuev, making him only the second boxer in history to have unified the cruiserweight titles and won a heavyweight world championship.

Live Boxing: David Haye v Arnold Gjergjaj will be shown live from The O2 and has been ordered by UKTV director of commissioning Richard Watsham and Dave general manager Steve North. The three-hour special will include highlights from the night’s undercard at The O2, including Briggs versus Dimitrenko; a 10-round English middleweight title fight; Sheikh Fahad Bin Khalid Al Thani, a member of the ruling family of Qatar and the country’s first ever professional boxer, makes his debut plus all the action and insight from ringside and musical performances from a number of household names.

Richard Watsham said, “I’m thrilled that David wants to be back on Dave for his next fight, it speaks volumes about our relationships with top talent. We broke records for the channel back in January when David defeated Mark de Mori. I have no doubt that with the developing rivalry with Shannon Briggs adding extra tension, 21st May promises to be bigger, better and even more entertaining.”

Steve North added, “After the smash-hit first match we are delighted to welcome David back to the channel, and we are confident we can continue to build on the brilliant sporting coverage we delivered in January. The second Haye Day promises even more entertainment and even more boxing as we are able to offer more air time for fans to see boxing for free.”

‘Haye Day’ will be promoted by David’s own promotional company Hayemaker Boxing Ltd with support from The O2. Live Boxing: David Haye v Arnold Gjergjaj is produced for UKTV and executive produced by UKTV’s Helen Nightingale.

The announcement comes off the back of the recently announced BDO World Trophy Darts 2016, which airs on Dave the weekend following Haye Day, starting Saturday 28 May at 12 noon.

David Haye takes on Arnold Gjergjaj at The O2 on Saturday 21 May. For tickets to #HayeDay visit theo2.co.uk or watch the fight exclusively live on Dave. #HayeDay

Woods, Williams up the ante in May 13th welterweight war »