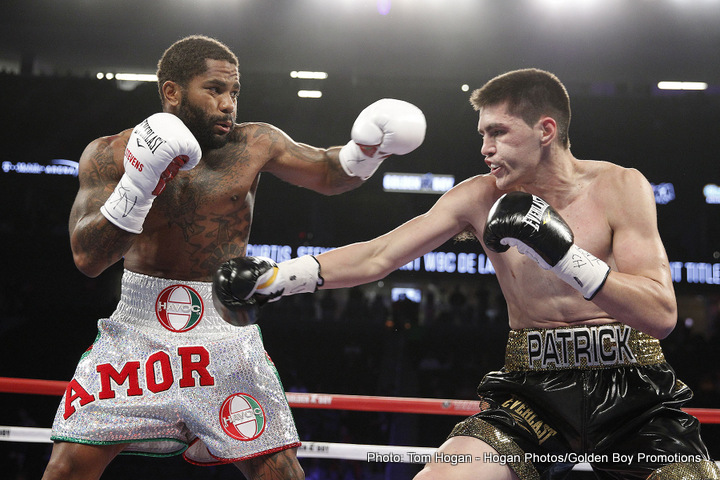 By Jeff Aranow: Veteran Curtis Stevens (28-5, 21 KOs) proved to be too much for previously unbeaten Golden Boy Promotions prospect Patrick Teixeira (26-1, 22 KOs) in stopping him in the 2nd round tonight on HBO PPV from the T-Mobile Arena in Las Vegas, Nevada.

Stevens, 31, dropped the 25-year-old southpaw Teixeira with a big right hand in the 2nd round. Referee Tony Weeks halted the fight after Teixeira got back to his feet and was still staggering.

In the 1st round, Stevens staggered the tall 5’11” Teixeira with a left hook to the head. Teixeira was able to make it out of the round but he needed to use constant movement to stay out of the way of Stevens, who was looking to take his head off with every punch. Teixeira was using his reach to land shots, but they didn’t have the power on them that he needed to keep Stevens off of him. Stevens showed no respect for Teixeira’s power, and he was able to cut off the ring to nail him with big shots. Teixeira reminded me a lot of Top Rank fighter Gilberto Ramirez, who recently beat Arthur Abraham last month to capture the WBO super middleweight title. Ramirez is taller at 6’2″ than Teixeira, but he has the same long arms and ring movement. Teixeira will need to utilize more movement and jabbing in the future to keep from getting knocked out again by the bigger punchers in the division.

In hindsight, this was far too advanced an opponent for the young Teixeira. Putting him in with a guy that is still capable of beating a lot of fighters in the middleweight division was not a good move. You can argue that Stevens is good enough to beat guys like David Lemieux, who Golden Boy is trying to rebuild to put him in with Saul “Canelo” Alvarez. Before this fight, Teixeira had been facing very weak opposition that was in no way any preparation for what he had to deal with tonight against the hard hitting Stevens. This was baptism by fire tonight for Teixeira.

“The name of the game is to knock people out and that’s what I did tonight,” said Curtis Stevens. “I feel great to get back into the game after my one and a half year break. I really want Lemieux, but I will take whatever I can get. My head is right, and I’m ready to take on whoever.”

“Throughout the fight, I didn’t know if I was winning or losing,” said Patrick Teixeira. “This fight was not how I expected it to go.”


« Crolla stops Barroso in 7th round