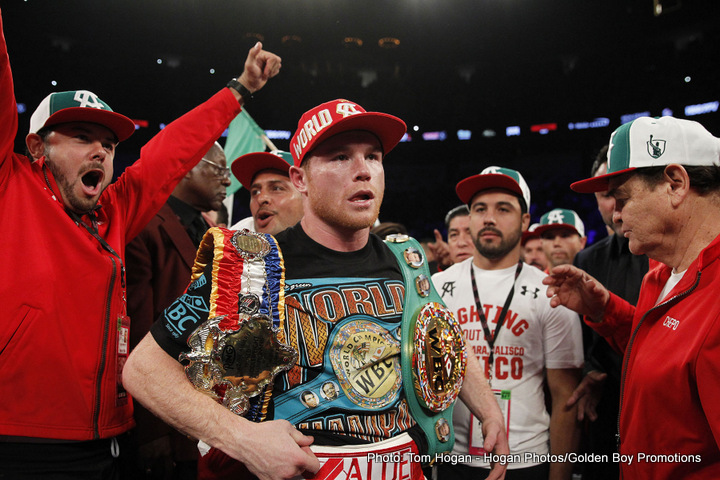 Chavez likes Canelo’s skills that he’s now showing right now, and he feels that he could give the 34-year-old Golovkin his first loss of his 12-year pro career. Unlike a lot of people who feel that Canelo is hiding behind his catch-weights as an excuse to avoid the Golovkin fight, Chavez sees Canelo as unafraid of the Kazakhstan fighter.

If that is indeed the case, then we’ll find out really soon whether Canelo is afraid or not because his promoters at Golden Boy Promotions are in negotiations with Golovkin’s promoters at K2. If the fight doesn’t get made due to Canelo feeling he needs a weight handicap, then you can draw your own conclusions from there.

The way Canelo fought against Amir Khan this month, I don’t think Canelo will do very well against Golovkin. Canelo looked totally unchanged from the fighter he was back in 2013 in his loss to Floyd Mayweather Jr. I saw no changes in Canelo’s game. He was the same slow-footed fighter that he was against Mayweather.

The only difference is he was fighting a guy that makes mistakes in Khan. Mayweather rarely threw hooks against Canelo. Khan was throwing them all the time, and it led to him getting knocked out by a right hand by Canelo.

What would be bad for Canelo is he’s gotten really accustomed to fighting guys he outweighs in the ring. Canelo’s weight advantage has helped him absorb shots from the lighter opponents he’s faced. Against Golovkin, Canelo will need to be able to take shots from a guy who punches two divisions above his weight. Golovkin has light heavyweight power, and it doesn’t matter if Canelo rehydrates to 180lbs for the fight.

Golovkin will still be able to hurt him with his shots. He might be outweighed by 10 pounds by Canelo, but that’s not going to bother Golovkin because he has the power to make a dent in Canelo’s chin with his hard punches.

Since that fight, Chavez Jr. has fought journeyman Brian Vera twice, Andrzej Fonfara and Marcos Reyes. Chavez Jr. has very little to show for the last four years of his career. He currently hasn’t fought since July of 2015, and he has no fights scheduled right now. It’s logical to assume that Chavez Jr. won’t fight before July, so he’ll have been out of the ring for over a year by the time he eventually fights whenever that is. There’s talk of Chavez Jr. fighting Gabriel Rosado next. That’s probably a bad idea for the ring rusty Chavez Jr. because the way he’s looked in his last two fights against Reyes and Fonfara, he might lose to Rosado.


« Revival of interest in the heavyweight division still only hot air, at least for now