Will the Third Time be the Charm for Bradley? 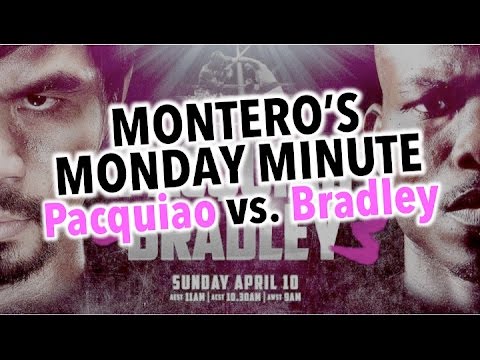 By Michael Montero – This Saturday night at the MGM Grand in Las Vegas, Manny Pacquiao and Timothy Bradley meet for the third time in a matchup that had many boxing fans groaning when it was first announced. After all, almost everyone feels that ‘Pacman’ clearly bested ‘Desert Storm’ in the first two bouts, regardless of the scores rendered by two judges after their first encounter in 2012. Pacquiao certainly didn’t help matters with his recent inflammatory comments about homosexuals and the subsequent media fallout that set the Twittersphere ablaze. Yet even though ticket sales lagged initially, fan interest has grown in recent weeks due to several factors.

For starters, this is one of the best PPV undercards that promoter Top Rank has put together in quite some time. Secondly, discounted ticket/hotel packages have offered many fans a chance to see superstar Manny Pacquiao live for the first time. And lastly, many boxing insiders feel that this so-called “rubber match” is truly an even matchup due to Manny’s decline and Timothy’s new partnership with flamboyant trainer Teddy Atlas. But can the adopted son of Palm Springs, California pull the upset this time around? What would a Bradley victory mean for boxing? What if old man Pacquiao turns back the clock? And is this truly the swan song for the Filipino icon?

The first two PPV cards averaged about 800,000 buys, meanwhile this third event figures to do around half of that. Could the backlash from the disappointment of Mayweather-Pacquiao still linger? Perhaps boxing fans and the media like are simply ready to move on from “Pac Mania” and turn the page in order to welcome in the new school? The consensus is that win or lose, Pacquiao’s supposed “retirement” will only be temporary. If he were to defeat Bradley in dominant fashion, most believe it will lead to a Mayweather-Pacquiao rematch in 2017, which almost nobody wants. However a Bradley win could open things up to several interesting matchups against the likes of Kell Brook, a rematch with Jessie Vargas, or the winner of several upcoming bouts including Crawford-Postol, Herrera-Gomez, or even (gulp) the Canelo-Khan victor. Crazy as it sounds, even a fall matchup with Miguel Cotto would be possible. Bottom line is that a win gives Bradley a ton of options; a loss slams the door on most of them. So what does he have to do to get the W on April 9th?

For Bradley, it all starts with the jab. In the first bout with Pacquiao, he threw 449 of them. And even though he only landed 11% of his jabs, the high activity kept Manny from landing big punches that could do serious damage. Timothy came into the 2014 rematch feeling he had to score a knockout to win, and given the fallout after the highly controversial split decision verdict in their first bout, he was probably right. However, Bradley’s “stand and trade” game plan fell right into Pacquiao’s hands. Desert Storm threw 162 less jabs with the same 11% connect percentage, while Pacman landed 43% of his power shots. The offensive output from both fighters was down from the rematch, but Manny was able to land the hard, destructive type of punches he didn’t in the first bout, stunning Bradley numerous times and swelling up his face. This cannot happen in the third bout if Timothy wants to win.

No doubt Teddy Atlas and his new fighter have watched plenty of film from the first two assignments against Pacquiao and observed the difference between the two. The jab is key, but balance and focus are also important. Teddy has his man concentrating on footwork in camp, and fans can expect some classic Atlas corner fireworks if Bradley appears to need motivation between rounds. Can he ever top the now infamous “fireman” speech? We shall find out Saturday night.