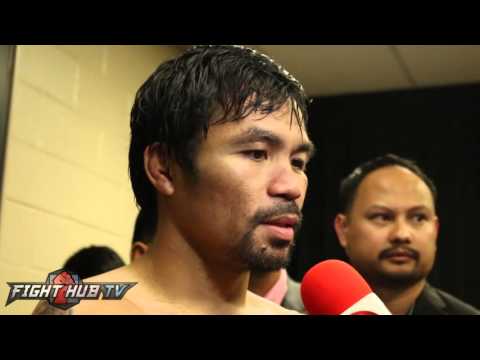 In a much anticipated rubber-match, the pace began cautiously between the tactful world-class warriors. The opening four-rounds were signified by an extended feeling-out process, however, just as Bradley seemed to uncork the evening’s first significant salvo in round eight, Pacquiao would respond with two decisive knockdowns in the final four frames.

In total, the campaigning Senatorial hopeful out-landed a noticeably polished Bradley 92-87. However, the pendulum that ultimately swung the fistic affair in “Pac-Man’s” favor was the level of aggression the Philippine legend showcased, combined with a bevy of well-timed peppering straight lefts.

With the win, Pacquiao returned triumphantly from a shoulder injury sustained against now retired, all-time great Floyd Mayweather Jr. That Pacquiao’s performance opposite a 32-year-old world-class pugilist in Bradley Jr. was so impressive, many will no doubt postulate whether this truly was Manny’s swan song.

After the final bell, it was revealed that Pacquiao’s long-time trainer, Freddie Roach is in favor of his charge battling Ring Middleweight kingpin Saul “Canelo” Alvarez and then bowing out in a rematch against Mayweather Jr.

Bradley on retirement: "I still can fight!" #PacBradley

Both scenarios seem unlikely, but in the sport of boxing one can never say never.

Liam Smith to fight on June 4 »