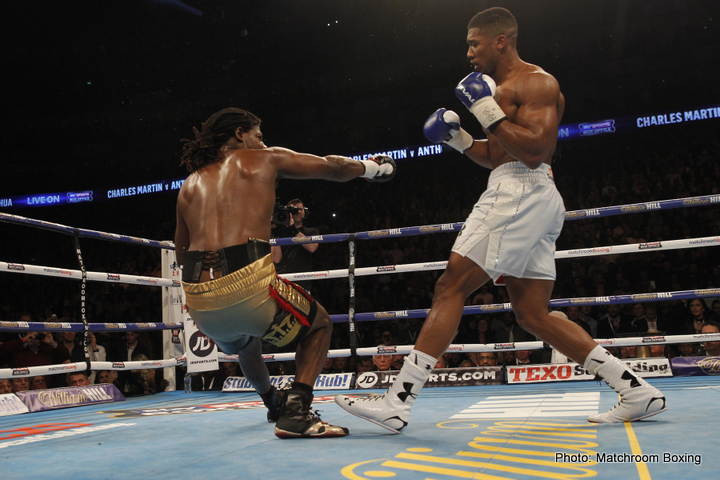 By Scott Gilfoid: The April 9 title fight between IBF heavyweight champion Charles Martin (23-1-1, 21 KOs) and Great Britain’s Anthony Joshua (16-0, 16 KOs) failed to bring in a lot of viewers on Showtime for their fight at the O2 Arena in London, UK.

The Martin-Joshua fight was televised in the States and it brought in a low average of just 275,000 viewers with a peak of 317,000 viewers for the fight, according to the Nielsen Media Research. There are couple of reasons for he incredibly low viewing numbers.

First off, neither Martin nor Joshua are well known in the States. It was a fight that was begging for trouble in it being televised in the U.S, because neither of these guys had laid down the foundation to bring in big ratings due them not being highly visible fighters in America. Further, the Martin vs. Joshua fight was televised on Showtime during the afternoon.

Joshua won the fight by stopping the southpaw Martin with a right hand that he didn’t see coming. It wasn’t the speed of Joshua’s right hand that gave Martin problem. It looked like more of a case of Joshua holding up his left arm far in front of him before throwing the shot that prevented Martin from seeing the punch. At any rate, Joshua knocked Martin down twice in a row. In the second knockdown, Martin appeared to beat the count but the referee halted it anyway.

I had Martin up at the count of 7 and I still don’t know why the referee stopped the fight because Martin was clearly up and ready to continue fighting. The stoppage leaves a dark cloud over the Martin-Joshua fight in my view because we never really got to see who would have won the fight if it wasn’t for the quick stoppage. I’m just saying. You don’t like to see visiting fighters get stopped at the count of 7 when they’re fighting the home fighter in his own hometown.

Joshua’s promoter Eddie Hearn is working on getting a deal for Joshua’s fights to be televised on HBO or Showtime. Presumably, these fights would be televised in the afternoon on Saturdays as well. I hope that whichever network that signs Joshua gets a good deal out of it because I can’t see Joshua’s fights bringing in big ratings if they’re going to be televised in the afternoon each time he fights. Also, without Joshua traveling to the U.S to market his fights, I can’t see him becoming a big deal. Joshua will need to be put in with the likes of Luis Ortiz and Deontay Wilder to bring in big ratings, and I can’t see him beating either of those talents. If Joshua signs a deal for his fights to be televised on HBO, then we likely will never see him fight Deontay because he fights on Showtime and Premier Boxing Champions. Joshua will be able to fight Luis Ortiz, but not Deontay. Ortiz fights on HBO. It’ll be interesting to see if Hearn let’s Joshua fight Ortiz in the near future or if he waits until Ortiz ages more before he lets the fight happen.