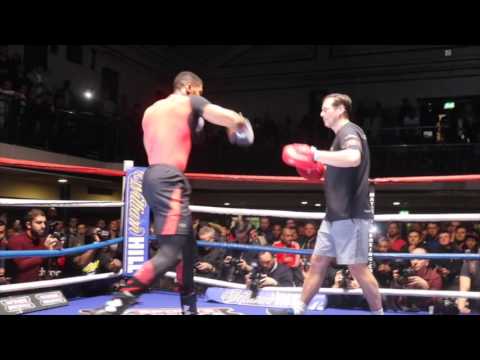 By Scott Gilfoid: Anthony Joshua (15-0, 15 KOs) is making a mistake in looking past his opponent for this Saturday night in IBF heavyweight champion Charles Martin (23-0-1, 21 KOs) towards a much hoped for title unification fight against IBO/WBA/WBO heavyweight champion Tyson Fury (25-0, 18 KOs) in the summer.

If you look at the above video of Joshua work out on the mitts, what jumps out at you is his complete lack of hand speed. Joshua has really slowed down quite a bit since he bulked up 30 pounds since turning pro just three years ago in 2013. Joshua is now like a slower version of Frank Bruno in my opinion. Joshua needs to look at some old video of him when he was 220, and get a clue that he needs to drop that weight he’s put on because he hasn’t made him a better fighter. The Joshua from 2009 would beat the same guys he’s fought as a pro but beat them easier.

Joshua and his promoter Eddie Hearn are practically salivating at the thought of fighting the 6’9” Fury in what would clearly be a big money fight. Unfortunately, the odds of the fight taking place under ideal conditions with both fighters being unbeaten are very slim.

Yeah, a fight between Joshua and Fury can take place in 2016, but one or even both fighters may be coming off of losses and they could still be licking their wounds when they face each other. If not actual wounds, then wounded pride.

“Promoters would love that fight and so would I,” said Joshua to skysports.com. “But Fury should just be himself and not try and be this character. Boxing’s a sport that gives you license to act like an idiot, I think! They’re all just waiting for me to fail,” he said. “Listen, they’ll be waiting a long time.”

It sure does sound like Joshua has a major chip on his shoulder, doesn’t it? No one is waiting for Joshua to fail, at least as far as I know. Fury is taking shots at Joshua obviously because he sees him as a young upstart with a silver spoon shoved into his gob after winning a controversial gold medal in the 2012 Olympics. When you win a gold medal in the Olympics it puts you on the fast track for a world title, and we’re seeing that now with Joshua. When you look at Joshua’s fight resume as a pro, it’s just horrible and nauseating for me. Then you realize that Joshua is getting a world title shot off of wins over a bunch of old 40-year-old guys and fighters with shoulder injuries like Dillian Whyte.

Of course, Fury isn’t going to be happy at seeing Joshua get an easy title shot, when Fury had to actually labor for a number of years before he finally got his title shot. Fury had to fight an eliminator bout against Dereck Chisora, and he’s lucky he got the shot in 2015.
“Hmm, Olympic champion and world pro champion at the same time,” he said. “It’s the ultimate double really. That would be really cool if I could.” Said Joshua.

Winning world titles now isn’t the same as when you did it during the era of George Foreman and Muhammad Ali. Those are two heavyweights that won gold medals in the 1960s in the Olympics, and then went on to win world titles when they turned pro. Back in their era, there weren’t a gillion alphabet belts to help them win world titles like there is now. As such, Joshua can win a world title just by sticking around long enough and fighting the right paper champion to win a belt. That’s the reality of it.

The different weight classes are totally watered down now with all the different titles that can be won. It’s like having four Super Bowl games each year with different teams competing for each Super Bowl. The fans would see the games, and have no clue which is the best overall team from the four games.

It’s always a bad idea for a fighter to look past their opponent, especially when they’re fighting a world champion like Charles Martin. I just think Joshua’s ego has gotten out of control lately with all these showcase fights his promoter Eddie Hearn has been setting up for him. When you fight the kinds of guys that Joshua has been facing in the last several years, it’s easy to get a warped perception of how talented you are.