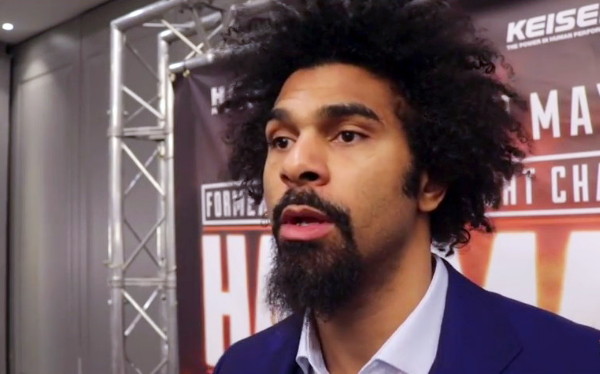 By Scott Gilfoid: David Haye will be working for Sky Box Office this Saturday night as a commentator for the heavyweight title fight between IBF champion Charles Martin (23-0-1, 21 KOs) and the highly popular British fighter and 2012 London Olympics gold medalist Anthony Joshua (15-0, 15 KOs) at the O2 Arena in London, UK.

Haye not surprisingly is pulling for Joshua, who he feels will have too much heart and boxing skills for the hard hitting 6’5” Martin. However, Haye doesn’t know for sure what to expect from the 29-year-old Martin because there’s so little tape of him against talented fighters to go on.

Haye doesn’t know how Martin will fight given lack of experience against top rung competition. The only fight against a quality opponent that Martin has had was his fight against Vyacheslav Glazkov last January, and that’s a fight that ended early after Glazkov blew out a knee. But by the same token, Joshua doesn’t have any tape out on him either against quality opposition.

Joshua’s first 14 opponents of his pro career were against the weakest of weak opposition, and when he did fight a decent fighter in Dillian Whyte, he was staggered in the 2nd round before Whyte’s shoulder gave out on him. Joshua then beat a one-armed Whyte with him unable to use his left arm.

If you go back to the last time that Joshua fought quality fighters, it was during the Olympics in 2012 in London, and Joshua arguably was beaten by all four opponents he faced. As such, you can’t really say for sure what you can expect from Joshua.

“I’ll be working for Sky Box Office on the Charles Martin – Anthony Joshua Showdown of the IBF championship of the world,” said Haye to IFL TV. “It’s going to be a fun fight. Two big guys, both about 6’5”, 6’6”, both big powerful guys, both with high knockout ratios. Expect fireworks in that one. I believe Anthony should be superior with his skills and his heart and conditioning will show through. I believe he has the attributes if he technically gets it right. I don’t think this fight is going to be physical early doors. Both guys like to punch clean. Neither of these guys like wrestling; they like punching long, punching hard. They both have got a lot of knockouts between them. I’m expecting fireworks. Both guys want to test each other’s chins, and if Anthony gets him hurt, Charles Martin is going to have to do well to get through that. It makes him [Martin] more unpredictable. AJ [Joshua] can’t watch anything on line of his [Martin] prior fights and say ‘Okay, see what he did against that guy.’ He can’t because he’s never fought anyone remotely like Anthony Joshua. He’s literally coming into the unknown. That works both ways. It works for Anthony Joshua as well because Charles Martin hasn’t fought anyone or anything close to Anthony. So it’s going to be a tough fight. I envision Anthony Joshua winning the IBF title, and that will be a huge boost for British boxing and British heavyweight boxing,” said Haye. 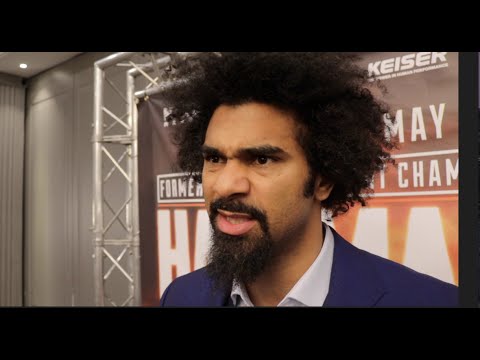 It looks like Haye was getting a little mixed up when he was analyzing the fight. Martin, 29, is seen by many to be the more skilled of the two fighters. Martin has the better technical skills and is lighter on his feet in the minds of a lot of boxing skills. Indeed, all you need to do is take one look at Martin’s recent workout for the media and fans this week, and you can see that he moves like a dancer. He’s got amazing boxing skills that can’t be denied.

It’s definitely true that the two fighters won’t be making it a physical affair with a lot of wrestling around and such. Both guys like to land big shots. If there is going to be any physical stuff going on, it’s probably going to be on the part of Joshua, who likes to use his bigger size against his smaller opponents.

I can definitely see Joshua bumping Martin when they get in close. The good thing that Martin has going for him is his size and weight. He’s about as heavy as Joshua is, so he’s less likely to break apart when/if he gets rammed by the 250lb Joshua on Saturday night. We don’t want this fight to end up like two male billy goats ramming each other in the ring instead of them throwing meaningful punches. That’s why I’m hoping there’s a good referee working the fight in case this gets a little physical.

All I know is that this is going to be a good fight on Saturday night between two big heavyweights. We can’t say for sure how well Joshua or Martin are going to do in this fight because neither of them have been in with fighters like each other. We saw how Joshua struggled when he had to fight big heavyweights in the Olympics.

You can’t ignore that of course because it’s possible that we could see a duplicate event take place with Martin giving Joshua major problems. Hopefully we won’t see controversy stinking up this fight like it did with the 2012 Olympics’ in London because it would be a real pity if we saw the wrong guy get his hand raised at the end of the fight.

Haye mentions that Martin will have to find a way to get through a shaky point in the fight if he gets hurt by Joshua at some point. I think if Joshua stuns Martin or if he thinks he’s got him stunned, he could lose his senses completely in the same way he did in the 2nd round of his last fight against Dillian Whyte, when Joshua went primitive and started throwing wild haymaker shots that resulted in Whyte clipping him with a big left hook to the head.

What makes Martin so good is he’s got an ability to throw short punches with major power. He’s not like Joshua, who needs to be punching from long range or medium, range to get power on his shots. Martin is able to generate big time power in close, and that means that Joshua is going to need to be on the alert at all times because if he gets nailed by Martin, we could see him staggering around again like he was in the Whyte fight. Martin has accuracy that fighters would just die to have because he doesn’t miss with his shots. If Joshua gets hurt in this fight, then he’ll be in major danger of being finished off.