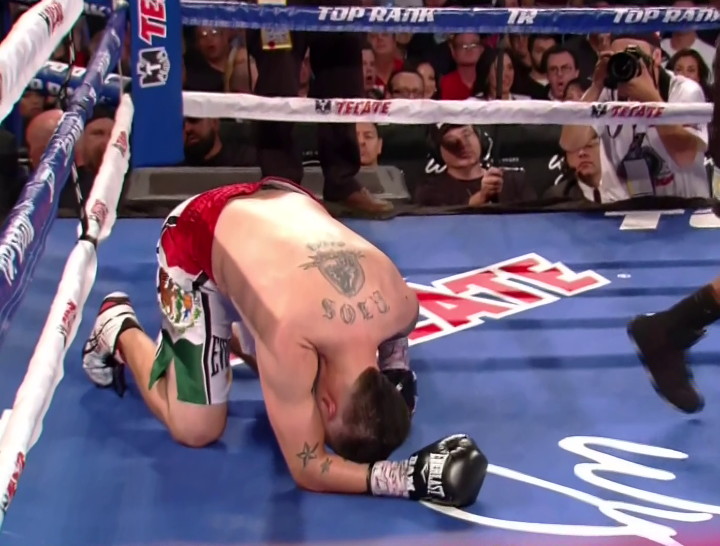 By Dan Ambrose: According to Top Rank promoter Bob Arum, former four division world champion Miguel Cotto (40-5, 33 KOs) contacted him to discuss a possible fight against the recently knocked out Brandon Rios (33-3, 24 KOs), says Dan Rafael. Arum reached out to Rios’ manager to see if there was any interest in a fight against the 35-year-old Cotto, but they were not interested.

You can’t blame the 29-year-old Rios for not agreeing to fight Cotto because it would have been a terrible mismatch. Cotto needs an opponent for his June 18 fight from the Barclays Center in Brooklyn, New York. If Cotto is looking in the direction of Rios or fighters of that quality, it shows you what Cotto is looking for in an opponent.

Rios was losing the fight and would have lost had it gone one more round. In watching the round in slow motion, I saw no elbow being thrown by Chaves. Rios also dodged a loss in his fight against Richard Abril in 2012 in winning another controversial fight. I had Rios wining only 3 of the 12 rounds, and many other fans thought Abril deserved to win. If you count that as a loss, Rios really should have five defeats in his last seven fights. That’s journeyman level.

Rios took a beating in his last fight against Tim Bradley in getting stopped in the 9th round last November. Rios rehydrated to 170 pounds after making weight at 147lbs. That’s 23 pounds that Rios put back on the night before the fight. He was literally the weight that a lot of middleweights rehydrate to after they make weight. Needless to say, Rios was in no shape to fight on that night, and he was barely able to throw more than a handful of punches in each round.

It’s unknown if Rios will eventually return to the ring to continue his sinking boxing career. He’s made good money in his fights against Pacquiao, Bradley, and Chaves. He can probably stay retired without ever needing to fight again as long as he doesn’t get foolish with his money.

It looks like Cotto is going to be facing an easy mark for his June 18 fight. It’s going to be interesting to see if this fight will be on PPV on HBO. If so, Cotto will bring in embarrassingly low numbers if he elects to fight a weaker opponent, especially if he chooses to fight someone from the welterweight division rather than someone his own size at 154.

In other news, boxing greats Roberto Duran and Julio Cesar Chavez Sr. plan on fighting a 2-round exhibition bout on the July 23 fight card headlined by WBO light welterweight champion Terence Crawford. Duran is 64-years-old and hasn’t fought in 15 years since ending his career in 2001.

Chavez Sr. is 53, and hasn’t fought in 11 years since retiring in 2005. It sounds like a really bad idea for Duran and Chavez to be fighting each other in an exhibition match. Someone can get hurt due to their advanced age. Unless they’re going to get a big payday out of this, it would seem demeaning for them to face each other in an exhibition fight. Chavez is about to turn 54 in June, and it’s not a good idea for him or the 64-year-old Duran to be trading blows, even if they’re wearing huge 16oz gloves.

“Arum says that on July 23 PPV topped by Crawford he is going to have Roberto Duran and Chavez Sr. box a 2-rd exhibition. Just for fun,” said Rafael.

I get the feeling that Arum wants to try and attract pay-per-view buys to his Crawford card. This will be Crawford’s first PPV fight with him as the headliner, and he clearly isn’t popular enough to be a headliner on a PPV card. It’s a card that will be lucky if it even brings in 50,000 PPV buys. It wouldn’t be surprised if it brings in only 20,000 buys if that. Crawford’s opponent will likely be WBC light welterweight champion Viktor Postol. It’s a good fight, but only the hardcore boxing fans know who Crawford and Postol are. You can’t sell a fight between those guys in a main event in my view. I think it’s going to be a total fail.

« Algieri not happy with gatekeeper label

Videos: Martin vs. Joshua Weigh-In – Briggs/Haye Go At It! »