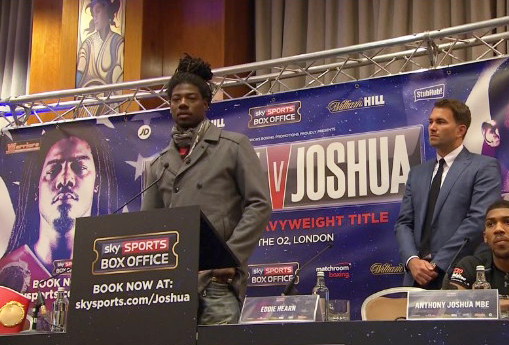 By Scott Gilfoid: IBF heavyweight champion Charles Martin (23-0-1, 21 KOs) says he’s ready to go into the O2 Arena in London, UK and make the arena his on Saturday night when he defends his IBF strap against unproven challenger Anthony Joshua (15-0, 15 KOs).

Some would say the 26-year-old Joshua is undeserving of a world title shot at this point in his still green career, but Martin decided to give him a shot anyway despite his shaky resume of less than stellar opposition.

Martin, 29, obviously made the decision to throw a bone to Joshua due to him being a pay-per-view attraction in the UK, where his fights are now routinely televised on Sky Box Office PPV. That’s a negative for Joshua’s loyal boxing fans, because it’s likely they’re going to need to pay to see him fight on PPV for the remainder of his career if he can show that he’s capable of being a top fighter in the sport.

Right now, you can argue that none of Joshua’s fights should have been PPV, but that’s up his fans whether they’re willing to pay to see him fight.

“I don’t consider that everything is in his favor,” said Martin during the final press conference with Joshua on Thursday. “The O2 Arena? That’s my arena. I’m comfortable everywhere I go, that ain’t nothing new. When I first fought at Madison Square Garden, that was my first time ever being in there. I went in and performed as such. When I fought at the Barclays Arena, it’s the same thing.”

Yes, Martin has a mature outlook to the fight game and the nonsense of fighters owning the territory where they live. This isn’t some kind of silly turf war. It’s an athletic competition. Joshua’s fans won’t be able to scream him to victory on Saturday night against Martin. If Joshua can’t handle Martin’s powerful left hand shots and deal with his incredible talent, he’s going to lose the fight.

Joshua’s fans can yap all they want, but they’re not going to be in the ring with him to run interference to keep Martin from nailing him into submission. It might actually work against Joshua fighting at home because he’s going to be fighting with adrenalin due to all the cheering from his fans, and that in turn is going to cause him to be sloppy and fight like he hasn’t any sense in his head. Believe me, if you fight like you’re out of your gourd against a talented athlete like Martin, you’re going to get knocked out quickly. 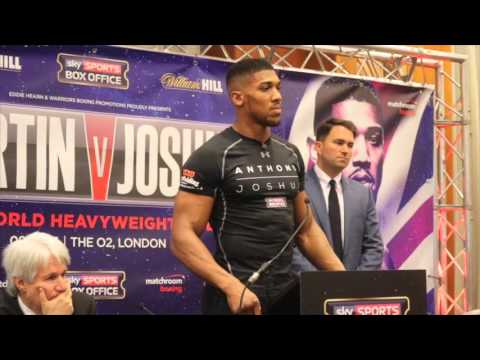 Joshua is pretty young, and you can tell that by listening to his bragging and patting himself on the back. He talks like he’s been a world champion for 100 years instead of just some guy that has been fed fodder opposition with the loving care from his promoter Eddie Hearn. Joshua came into the pro game after winning a controversial gold medal in the LONDON Olympics in 2012. A lot of boxing fans still believe Joshua lost between three to four of his fights in the Olympics. Martin saw the fights and concluded that Joshua was “gifted” his gold medal in that Olympics. 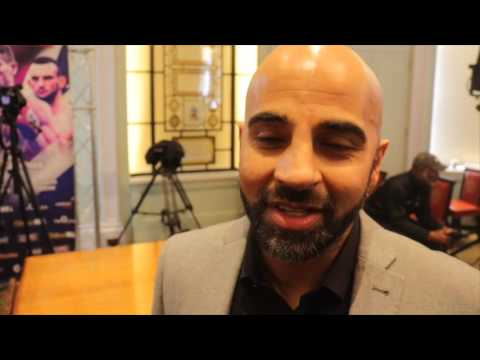 “I love what I do, I’m a performer. When eyes are on me, I’m going to perform,” said Martin. “Being physically strong and powerful isn’t the issue,” Martin added. “When I first started boxing in the heavyweight school I was in, those guys were 250lbs and big punchers, big heavy guys. I was 208lbs and knew how to be evasive, how to get out of the way. That’s never left me. I moved around on those guys. They had the power to knock my head off. Do you think they knocked my head off? No. So, I know how to move my head and be evasive. I’m technical in there, real true boxing analysts and people who know the sport see the small things I do.”

Martin definitely will need to move around the ring and not stay on the ropes like Joshua’s previous 15 opponents. Even Dillian Whyte ended up on the ropes in the 7th round of their fight, and that’s why he was knocked out. Joshua is the Saul “Canelo” Alvarez of the heavyweight division. He’s usually heavier than his competition, he has very, very slow feet like they’re stuck in concrete, and he’s very average when in the center of the ring.

Joshua mainly does well when his opponents stop thinking and pull amateur moves by backing up to the ropes to fight from that area. That’s obviously a product of Joshua mainly fighting sparring partner level opposition rather than skilled fighters. When you fight sparring partners, you’re going to see them back up against the ropes and just cover up like they do when they’re being used as sparring partners.

You would think that his opponents would have the sense enough to look at some of Joshua’s past fights to know that it’s not a smart thing to back up against the ropes. I don’t know why but they don’t seem to get a clue that if they back up against the ropes, Joshua will throw arm punches until the referee steps in and stops the fight, whether the fighter is hurt or not.

“I’m always here to prove the doubters wrong. When you doubt me it’s fuel for my fire. Burn on!” said Martin.

Yes, there is definitely a lot of doubters out there who think Martin will cave in just like the 15 handpicked fodder opponents that were lined up by Hearn for Joshua wo mow down. The thing is Martin is a different level from the guys that Hearn has been setting up for Joshua in showcase fights. Martin is perhaps three or four levels above the dreadful opposition that Hearn has been digging up and throwing in the ring for Joshua to tear apart each time he fights.

Martin, 6’5”, has the punching power, speed, counter punching ability and the overall talent to hand Joshua his first defeat of his pro career. This could be the beginning of many defeats for Joshua once Martin creates the blueprint in how to beat the hulking 250lb Joshua. If Martin exposes Joshua like Mike Tyson exposed Frank Bruno in the past, it’s going to give the other heavyweight contenders and world champions the blueprint in how to defeat Joshua in future fights.

Since I don’t see Joshua melting down all that beach muscle that he’s packed on since he turned pro in 2013, I see him lacking the hand speed, explosive power, and the mobility to deal with the other top heavyweights like Deontay Wilder, Luis Ortiz, Alexander Povetkin, and yes, even Tyson Fury.

I think Martin is going to show the boxing world that having muscles like Primo Carnera isn’t going to take you far in the 21st century. We saw what happened to the hulking 6’5 ½”, 260lb Carnera when he got inside the ring with the talented heavyweights like Max Baer and Joe Louis. He was knocked out by them.

Carnera did well when he was fighting fodder opposition that was put in there with him by his management. When he had to step it up, he was exposed by the talents. This could be Joshua’s destiny as well, and Martin might be the one that exposes him as a hype job on Saturday. I’m just saying.