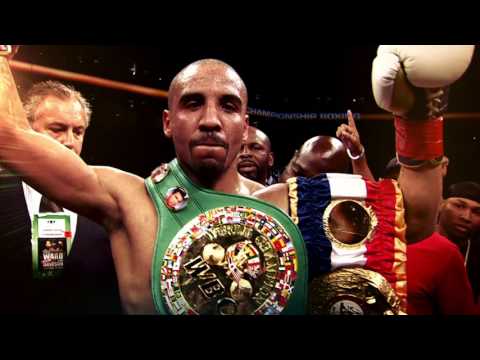 By Dan Ambrose: Sullivan Barrera (17-0, 12 KOs) saw tape of former WBA/WBC super middleweight champion Andre Ward’s fight from last June against an out of shape and flabby Paul Smith, and he thinks Ward struggled in that fight, which he ultimately won by a 9th round knockout. Barrera feels he’s got a very real chance of beating the 31-year-old Ward in their fight this month on March 26 on HBO Boxing at the Oracle Arena in Oakland, California.

Ward’s fight with an out of shape Smith came after Ward had been out of the ring for a year and half since his fight against Edwin Rodriguez in November 2013. Ward had been out of the ring due to a combination of injuries and promotional problems. When Ward did come back against an overweight Smith, he was noticeably slower and weaker than the fighter that had fought the likes of Rodriguez, Chad Dawson and Carl Froch.

There’s no denying that Ward did not look good in his fight against Paul Smith. Ward’s power wasn’t there for him compared to in the past, and his hand speed was definitely slower. Ward’s arms, which were never muscular to begin with, looked short and thin. He looked like he’d atrophied with his arm muscles.

Smith appeared to only fight hard for one round in the entire fight, and that was in the 7th, when he landed a big right hand to the head of Ward that jolted him. Even in that round, Smith only appeared to fight hard for half quarter of the round. He briefly came to life after landing a big right hand, and then soon after, he went back into not throwing punches. It looked like Smith didn’t have the conditioning to fight hard at all in that fight, so he focused on just covering up.

Barrera is a much bigger puncher than both Smith and Ward. The best shot that Smith landed against Ward is nothing compared to the kinds of punches that Barrera will be throwing in this fight. Ward doesn’t look as fast on his feet like he was in the past in fights against guys like Arthur Abraham and Carl Froch.

I think Ward has been slowly losing his ability to move over the year. If you look at Ward’s fight against Chad Dawson and Edwin Rodriguez, you’ll notice that he didn’t do much moving. Ward was doing a lot of wrestling on the inside against them, and not throwing fast punches like he had before.

Effort is between you and you. I'm the toughest opponent I'll ever face!! pic.twitter.com/EYQDjyhZLa

Barrera and his trainer Abel Sanchez believe that the years of inactivity has hurt Ward and dulled his skills somewhat. The fact of the matter is Ward stopped being an active fighter back in 2011. He’s fought infrequently in the last five years. Ward’s inactivity is very similar to guys like Oscar De La Hoya in the last part of his career. De La Hoya was an activity fighter during his best years, but when he hit his early 30s, he rarely fought and his performances reflected that.

Cotto vs. Kirkland possible for June 18 on HBO PPV »