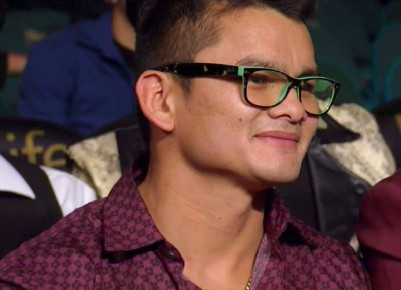 By Dan Ambrose: After seeing a photo of a bloated looking former two division world champion Marcos Maidana (35-5, 31 KOs) on the internet, his former trainer Robert Garcia said that he doesn’t think Maidana’s heart is into fighting anymore at this point of his career.

The 32-year-old Maidana has not fought since losing a 12 round unanimous decision to Floyd Mayweather Jr. in their rematch in September 2014. Maidana received good money for his two fights with Mayweather, and he doesn’t need to continue fighting like other fighters that haven’t been fortunate enough to fight someone like Mayweather.

“I know for a fact he doesn’t really want to do it [fight],” Garcia said via RingTV.com. “His heart isn’t in it. To me it’s not a surprise that he’s that heavy. And I’m not going to criticize him. I support him whatever decision he makes. But for me, I wouldn’t want him to fight again.”

If Maidana were to make a comeback now, he would need to take off a great deal of weight to get back down to his old fighting weight of 147lbs. By going off the picture of Maidana, he looks like he’s in the 200s at least. If Maidana has to cut 35+ pounds to get down to a weight of 165, it would be tough.

Maidana fought Mayweather at 165, so he might need to take off a huge amount of weight unless he’s in the 220 region. I don’t know if Maidana is that heavy. He does look very big. If he’s not fight again, he might want to consider dropping some weight just so he doesn’t end up with health problems. There’s no point in being rich I you can’t have a long life to enjoy the money.

If Maidana were to burn off the fat get down to the 170s, he might be able to hook up a fight with WBC middleweight champion Saul “Canelo” Alvarez or Miguel Cotto. Those would be nice payday fights for Maidana, and it would help feather his financial nest. The 5’7” Maidana wouldn’t be that badly outsized by the 5’9” Canelo. It would be similar to Cotto when he fought Canelo. I’d say that Maidana might be 10 to 15 pounds lighter than Canelo.

It wouldn’t be as bad as Amir Khan, who may end up being 20 pounds lighter than Canelo by the time the two fighters step into the ring on May 7. Maidana has the kind of punching power that would enable him to stand in the pocket and slug with Canelo. It could be tough fight for Canelo, because he would be getting hit with some shots that he’s never had to experience as a pro. At the very minimum, we’d fight out how good Canelo’s chin is and how much heart he has, because he would need both to survive a fight against Maidana.

Maidana was involved in some serious wars against Amir Khan, Victor Ortiz, Adrien Broner, Jesus Soto Karass and Josesito Lopez during his career. It’s kind of disappointing to see how he’s let himself go after ending his career. You’d like to think that Maidana kept himself trim after walking away from the sport rather than him looking the way he is in this picture of him.

« Algieri in tough against Spence