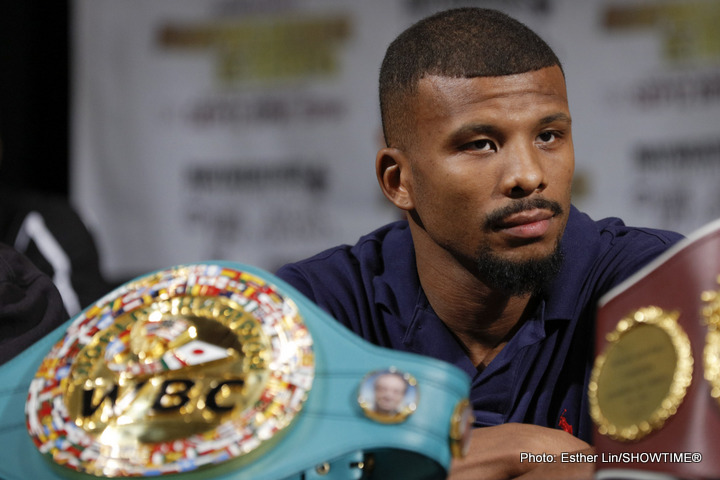 By Scott Gilfoid: WBC super middleweight champion Badou Jack’s title defense against former WBC middleweight champion Julio Cesar Chavez Jr. won’t be happening anytime soon, as Chavez Jr. is reportedly dealing with a shoulder injury that is keeping him from facing Jack. The Badou vs. Chavez Jr. fight will supposed to have taken place in April, but that’s not going to happen now.

Badou will be looking to see if his promoter Floyd Mayweather Jr. can find him a backup plan for his voluntary defense. There are a lot of good options for Badou to fight. Chavez Jr. was obviously a known commodity with the boxing fans who remember him for when he was a factor in the middleweight division.

However, Chavez Jr. has been out of the loop for so long that it probably wouldn’t have been a big fight for Badou anyway.

Badou has a choice. He can either wait for Chavez Jr. to slowly heal up and then face him, or he can stay busy with his career by fighting someone else for a decent payday. I know what I would do. I would move in another direction and take a payday against one of the World Boxing Council’s top 15 contenders.

Chavez Jr. will eventually heal. It is troubling that he’s starting to pick up frequent injuries though. Chavez Jr. suffered a hand injury in his last fight against middleweight Marcos Reyes last July. That injury has kept Chavez Jr. out of the ring all this time. Now to make matters worse, Chavez Jr. has a shoulder injury. Further, Chavez Jr. has had to work hard to take off a ton of weight that he put on after the Reyes fight.

Chavez Jr. looked huge before he started working on taking the weight off. I can only wonder how much he weighs now. I wouldn’t be surprised if he’s still too big to get down to 168 for the Badou fight. As such, Chavez Jr’s shoulder injury may have came at the right time for him.

“I really do not know what will happen,” Badou said via ESPN Deportes. “I have to talk to my promoter, Mayweather Promotions. I think we’ll start thinking about another opponent because we’ve already negotiated this fight for a long time. We were supposed to fight in January but it was postponed and it’s continued to be postponed.”

Badou should look to fight someone like Zac Dunn or Lucian Bute next. Those are two decent bottom fringe level contenders that would make for an interesting fight. They would be good stay busy opponents for Badou to fight while he waits for Chavez Jr’s shoulder injury to heal.

#1 WBC Callum Smith will be fighting Hadillah Mohoumadi in a WBC title eliminator on April 2. However, Badou can’t afford to sit around and wait five or six months for the winner of that fight to be finished licking their wounds from that contest and be ready to fight him. Badou needs someone that can be ready to fight him in a heartbeat because he’s already been out of action for the past six months since his 12 round split decision win over George Groves last September.

“It must be difficult what he’s going through and if he’s got injured I can only wish him the best,” said Badou about Chavez Jr’s injury problems. “Meanwhile we will have to see what comes up. I maintain that I am a great fan of his father but sometimes things like that happen.”