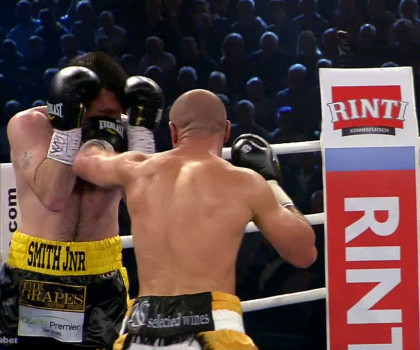 By Dan Ambrose: WBO super middleweight champion Arthur Abraham isn’t overlooking his #1 WBO challenger Gilberto “Zurdo” Ramirez for their fight on April 9 despite the fact that Ramirez, 24, is totally unproven in terms of experience, and hasn’t looked all that great against the marginal opposition his promoter Bob Arum of Top Rank has matched up against thus far.

Arum has been extra careful in matching the 6’2” Ramirez until now, and there is really no way of knowing how well Ramirez will do in this fight. All we have to do y really is Ramirez’s fight against Maxim Vlasov last year, and Ramirez was hurt several times and almost lost.

“I am already feeling great. Normally I just start preparation eight weeks before a fight, but this time my whole preparation lasts about 12 weeks,” Abraham said. “I am taking Gilberto Ramirez very serious,” said Abraham to ESPN.com.

Arum believes the 6’2” Ramirez (33-0, 24 KOs) can be another Saul “Canelo” Alvarez superstar in the sport if he can beat Abraham in their fight on April 9 on the undercard of the Manny Pacquiao vs. Tim Bradley on HBO pay-per-view at the MGM Grand in Las Vegas, Nevada.

Right now, Ramirez looks more like a poor man’s Julio Cesar Chavez Jr. to me than another Canelo. There are some huge flaws in Ramirez’s game that he’s going to need to repair before he can even get to Canelo’s level, and I think Canelo is a totally flawed and limited fighter.

Getting to Canelo’s level will still leave Ramirez as a very beatable fighter unless his promoter Arum lovingly steers him away from the quality fighters in the 168lb division like a mother hen protecting her young. I think Ramirez is capable of being a paper champion right now with the right kind of matchmaking by Arum.

However, Ramirez will need to beat Abraham on 4/9 in order for him to get to the point where he can be skillfully matched by Arum. I do not see Ramirez beating Abraham (44-4, 29 KOs). However, I can see a controversial decision in this fight with Ramirez being the beneficiary. He is in a great position to win a controversial decision unfortunately, given that he is the home fighter and Abraham is visiting from Germany.

“My coach, Ulli Wegner, is master not only of tactics and strategy but also to find the right environment to prepare for a fight,” Abraham said to ESPN.com. “It’s hard to prepare for a guy like Ramirez — not because of his style but for his physical dimensions. But, again, my coach pulled it off and found the right sparring partners.”

Ramirez is 6’2 ½” compared to Abraham’s 5’9.” Ramirez is also a southpaw with a much longer reach, and that’s going to make it difficult for Abraham to deal with his stance. Abraham is a huge puncher though, and he’s good at attacking his opponents. Ramirez tends to make it easy for his shorter opponents by electing to fight on the inside in his fights rather than using his height and reach to keep the action on the outside.

Abraham, 36, has defended his WBO 168lb title five times successfully since winning the title with a 12 round decision against Robert Stieglitz in 2014. Since then, Abraham has beaten Martin Murray, Paul Smith x 2, Nikola Sjekloca, and Stieglitz. None of those guys are major players at 168. Abraham has fought Stieglitz an incredible four times in just the last four years. You can bet that we’ll be seeing a fifth fight between Stieglitz and Abraham at some point whether Abraham has the title or not. The two fighters seem to be stuck on fighting each other, and the German fans don’t seem to mind seeing the constant repeat fights between them.

If Ramirez can win the WBO title, Arum wants to try and match him against Gennady Golovkin. That’s a fight that Arum says he would take in a second. A more realistic fight is Arum putting Ramirez in with his Top Rank stable fighter #3 WBO Jesse Hart. He looked terrible the other night going life and death with journeyman Dashon Johnson. Hart has got a lot of flaws, and incredibly the WBO has him ranked at #3. If Hart and Ramirez wind up fighting each other, it’s going to be a real mess because both fighters have little in the way of defensive skills.

Bradley: Pacquiao is only fighting for money now »